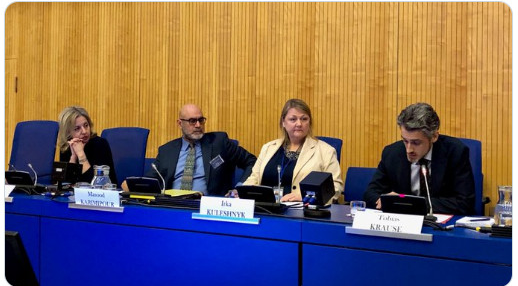 The risk of nuclear terrorism is real and alarming. Nuclear and other radioactive materials are not always protected. In some cases, this is due to a lack of adequate legal frameworks, while in other cases, the issue derives from these legal frameworks not being properly implemented. This is where UNODC can step in to support Member States.

On 11 February 2020, the Terrorism Prevention Branch (TPB) of the United Nations Office on Drugs and Crime hosted a side event on UNODC's contribution to the prevention of nuclear terrorism. The event, conducted in cooperation with Canada and the European Union, took place on the margins of the International Atomic Energy Agency's (IAEA) International Conference on Nuclear Security: Sustaining and Strengthening Efforts (ICONS 2020), at the Vienna International Center.

The panel session was opened by Mr. Masood Karimipour, Chief of TPB, the Ambassador of Canada H.E. Ms. Heidi Hulan, and the Alternate Permanent Representative of the European Union Delegation in Vienna Mr. Tobias Krause. It was moderated by Ms. Irka Kuleshnyk, Chief of TPB's Implementation Support Section I.

The event brought together high-level representatives from Angola, Ecuador, Uganda, the IAEA and the United Nations Office for Disarmament Affairs, who briefed participants on the importance of the universalization and effective implementation of the international legal instruments against nuclear terrorism, and their efforts to that end.

UNODC also delivered presentations on TPB projects that are currently being implemented on countering nuclear terrorism, which include a series of webinars on the subject matter and the new eLearning module on the international legal framework against chemical, biological, radiological and nuclear terrorism. TPB is also currently working on a new tool on the International Convention for the Suppression of Acts of Nuclear Terrorism.

UNODC's programme on the prevention of nuclear terrorism is made possible thanks to generous contributions of the Government of Canada and the European Union.