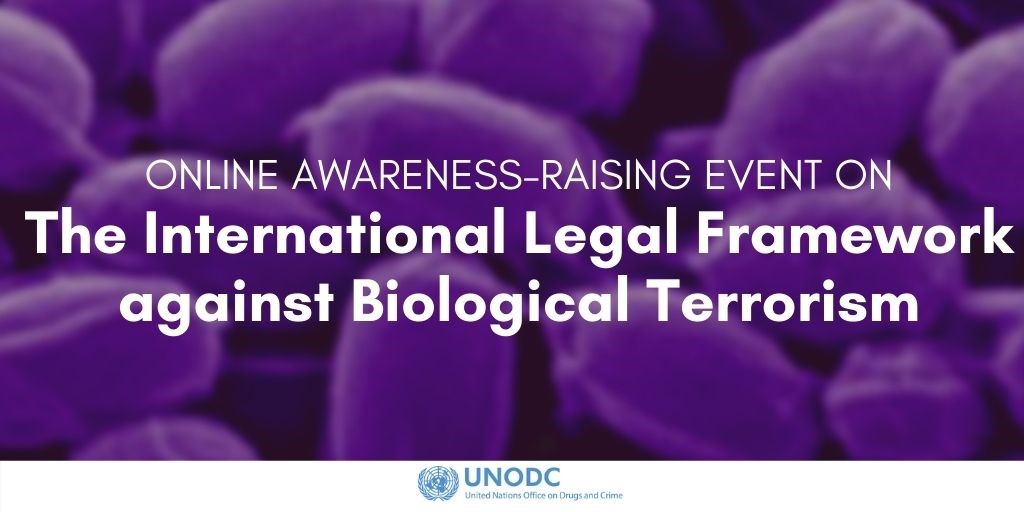 The disruption and uncertainty caused by the COVID-19 pandemic across the world have brought the threat of biological terrorism to the forefront of public discourse. While COVID-19 has undeniably renewed and heightened the world’s attention to this threat, the international community has long been confronted with the challenges of biological terrorism. For example, cases involving the deliberate use of biological agents for malicious purposes have occurred in recent history. Over the past decades, UN Member States have negotiated and adopted a series of international legal instruments to address the risk that non-State actors might develop, acquire and use biological agents or weapons for terrorist purposes.

In response to this growing threat, UNODC delivered an online awareness-raising event entitled “The International Legal Framework against Biological Terrorism” in September 2020. The event raised awareness of the existing international legal instruments, encouraged Member States’ adherence to them as well as offered a platform to explore and discuss how the instruments reinforce one another. The event gathered experts from academia and international organizations and was attended by 219 participants from 41 countries and 17 international organizations.

During the event, Mr. Masood Karimipour, Chief of UNODC’s Terrorism Prevention Branch, emphasized the need for Member States strengthened capacity to respond effectively to bioterrorism, as recently highlighted by the UN Secretary-General. Mr. Karimipour also underscored the crucial role that solid legal frameworks play in this regard. Preventing and countering biological terrorism requires a collective effort and UNODC can deliver assistance with specialized expertise through tailored capacity-building programmes.

Mr. Richard Pilch, Director of the Chemical and Biological Weapons Nonproliferation Program at the James Martin Center for Nonproliferation Studies, provided an overview of previous cases of biological attacks and attempted to identify common denominators between them to anticipate, and prevent, future threats.

Building trust and sharing information among organizations is essential to monitor and evaluate biological terrorism threats. Mr. Adrien Sivignon, Coordinator of the Bioterrorism Prevention Unit of INTERPOL, underlined how international cooperation can support law enforcement agencies in assessing the current biological threats and stressed how effective threat assessment tools are crucial in mitigating them.

Some of the international legal instruments that UNODC is mandated to promote were negotiated under the auspices of other international organizations, and deal with the criminalization of acts of biological terrorism in the areas of maritime navigation and civil aviation. Ms. Dorota Lost-Sieminska, Deputy Director and Head of the Legal Affairs Office of the International Maritime Organization (IMO), and Mr. Andrew Opolot, Legal Officer in the Legal Affairs and External Relations Bureau of the International Civil Aviation Organization (ICAO), delivered a presentation on the relevant legal instruments that fall under their respective purview. IMO discussed the criminalization provisions of the 2005 IMO Protocols and stressed that effective legal frameworks on the safety of maritime navigation are also necessary to prevent acts of biological terrorism at sea. Shipping is a global industry, relevant to both landlocked and coastal countries, therefore any country may have nationals who are victims or offenders of a terrorist act at sea.

The same legal framework is necessary to criminalize acts of biological terrorism affecting international civil aviation. ICAO delivered a presentation on the criminalization of biological terrorism under the 2010 Beijing Convention. Biological attacks against international civil aviation would shake public confidence while seriously disrupting air transport. The Beijing Convention criminalizes such acts and ensures that offenders would be held accountable and prosecuted should an attack ever occur.

Mr. Scott Spence, Expert at the Committee Established Pursuant to Security Council resolution 1540 (2004) explained that resolution 1540 requires States to have adequate legislation in place and to cooperate with one another to counter the threat of proliferation of biological weapons by non-State actors. It complements relevant multilateral disarmament and arms control agreements, including the Biological Weapons Convention (BWC). All UN Member States must comply with its provisions regardless of their status of adherence to other instruments and resolution 1540 helps to fill gaps in the existing international legal framework against biological terrorism.

Mr. Daniel Feakes, Chief of the BWC Implementation Support Unit of the United Nations Office for Disarmament Affairs (UNODA), presented on the BWC and its contribution to preventing biological terrorism. The BWC, a comprehensive disarmament treaty prohibiting the development, production, stockpiling, acquisition, retention or transfer of biological weapons, is not a counter-terrorism instrument per se as it was developed to address State actors. However, the BWC helps to reinforce the norm against the general use of biological weapons, and national implementation of its provisions contributes to preventing biological terrorism by extending some of its prohibitions to anyone in the territory of States Parties.

The event, conducted under the framework of the UN Global Counter-Terrorism Coordination Compact Working Group on Emerging Threats and Critical Infrastructure Protection, demonstrated the importance of international cooperation among a wide range of partners and stakeholders for the prevention of biological terrorism. Similar events are being planned for the upcoming months. For more information, please write to unodc-cbrn@un.org