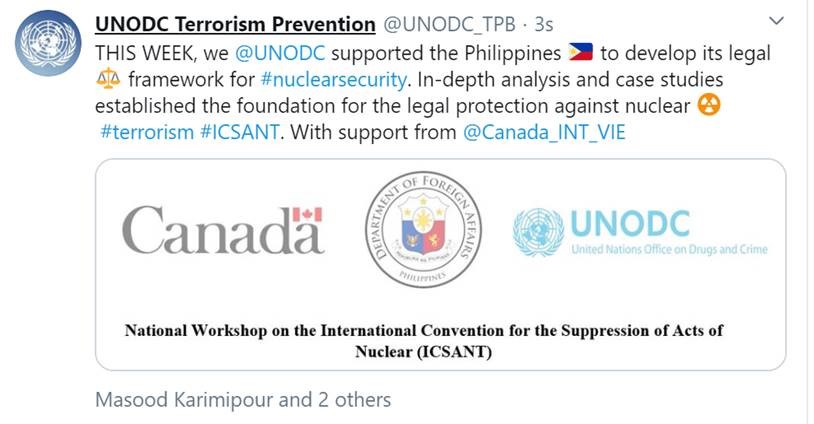 Responding to nuclear terrorism demands our urgent and undivided attention.

UNODC’s Terrorism Prevention Branch and the Regional Office for Southeast Asia and the Pacific (ROSEAP) delivered a national workshop on the International Convention for the Suppression of Acts of Nuclear Terrorism (ICSANT) in Manila on 20 February 2020.

In partnership with the Department of Foreign Affairs of the Philippines, the workshop brought together more than 30 participants from a range of government agencies, including the national police, the Philippine Nuclear Research Institute and the National Security Council, among others.

The workshop addressed the core components of ICSANT and the value that it offers to its State Parties, such as the fact that it reduces the risk of safe havens, facilitates cooperation and allows for the easy exchange of information. ICSANT also provides a common legal framework regarding nuclear terrorism. The Philippines’ adherence to ICSANT would therefore be of considerable benefit to the country itself, as well as to the region and the global community as a whole.

The workshop included interactive simulation exercises to consolidate learning outcomes, as well as recap the key findings and recommendations from the event commemorating the 10th anniversary of ICSANT’s entry into force, which was co-hosted by Canada and UNODC in 2017.

The workshop was funded by Canada.