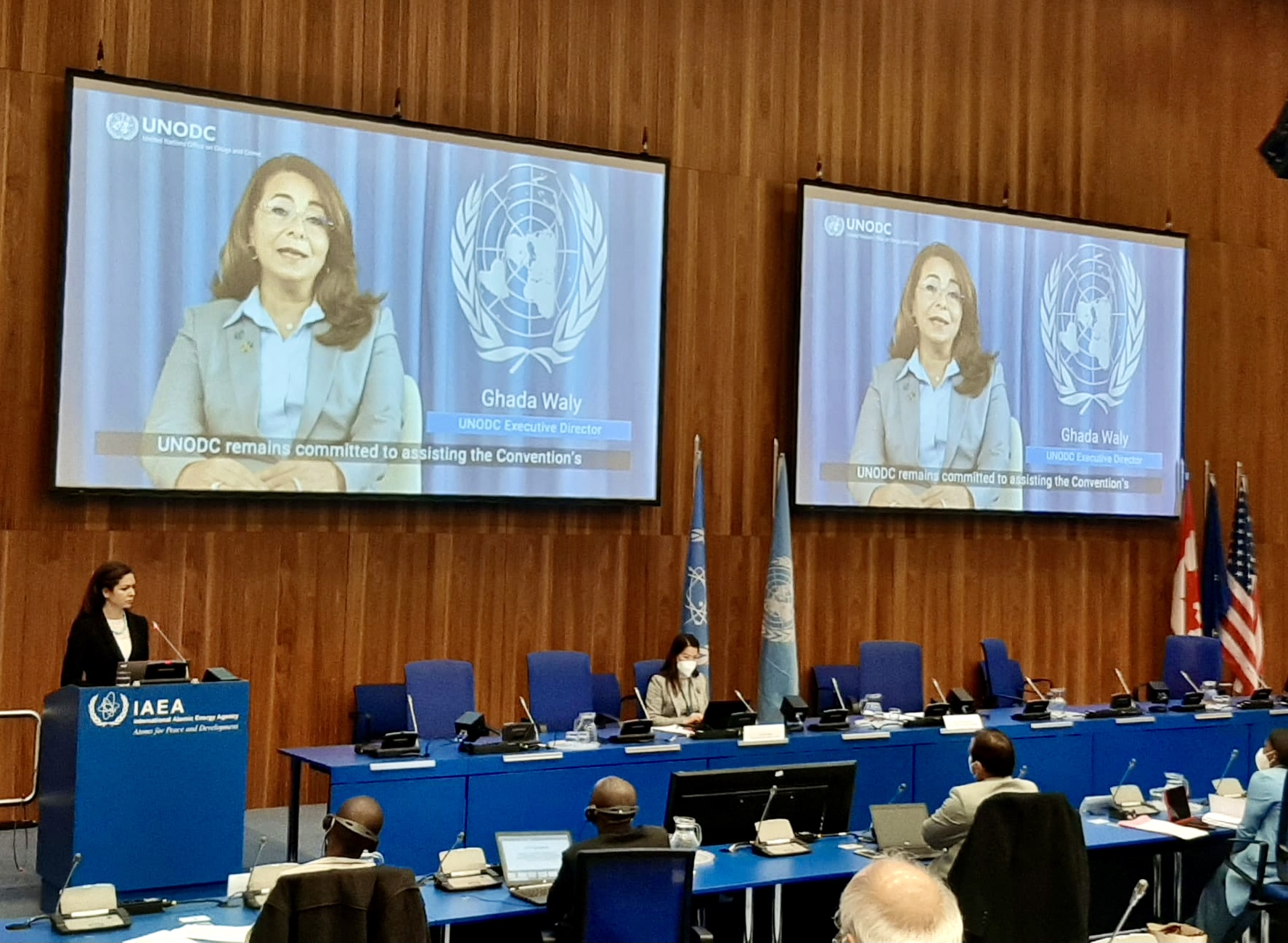 Strong legal frameworks are a necessary step to prevent nuclear or other radioactive material from falling into the wrong hands. Common baseline standards help deter malicious acts involving these materials and reduce the likelihood of safe havens for such acts and those who perpetrate them.

To continue to assist Member States with the strengthening of their legal frameworks, UNODC and the International Atomic Energy Agency (IAEA) held their first ever joint event to promote the universalization of the Amendment to the Convention on the Physical Protection of Nuclear Material (A/CPPNM) and the International Convention for the Suppression of Acts of Nuclear Terrorism (ICSANT) on 11-12 November 2021.

To date, ICSANT has 118 Parties, and the A/CPPNM has 127. This leaves more than one third of the countries in the world ill-equipped to address the threat of radiological and nuclear terrorism.

The seminar was opened by the Director of the IAEA’s Division of Nuclear Security, Ms. Elena Buglova, the Director of UNODC’s Division for Treaty Affairs, Mr. John Brandolino, the Ambassador of Canada (H.E. Mr. Troy Lulashnyk) and the Ambassador of the EU Delegation to the International Organizations in Vienna (H.E. Mr. Stephan Klement), and the Chargé d’Affaires of the US Mission to the International Organizations in Vienna (Mr. Louis L. Bono).

Ms. Buglova noted the synergies between the two legal instruments, and thanked UNODC for this joint effort which further enhances the existing fruitful cooperation between the IAEA and UNODC on promoting universal adherence to, and effective implementation of, the international legal instruments in nuclear security.

Mr. Brandolino quoted UNODC’s Executive Director to highlight the threat posed to international peace and security by acts of nuclear terrorism: “Countries need to keep nuclear and other radioactive materials out of the hands of terrorists and other criminals, as they are actively seeking these materials for criminal purposes.”

The representatives of Canada, the EU and the US commended this event as a prime example of cooperation between UNODC and the IAEA in the effort to promote the international legal instruments against nuclear terrorism. They also underscored the importance of drawing from each other’s expertise and joining forces in the pursuit of this common goal.

H.E. Mr. Klement welcomed “the joined-up approach of UNODC and the IAEA and the efforts to explore further synergies between the two Conventions” and added that “such mutually reinforcing projects that bring together international organizations working in the interest of all of us are pivotal for enhancing the global nuclear security framework.” He also stressed the need to ensure the highest standards of safety, security and non-proliferation in all peaceful uses of nuclear energy, and the key role played by strong legal frameworks in this regard. This message was reiterated by H.E. Mr. Lulashnyk, who pointed out how most human issues we are confronted with (from climate change, to cancer therapy, to food security, to name a few) involve nuclear or other radioactive material, thus making a robust nuclear security architecture an essential prerequisite: “Joining the CPPNM and its Amendment, along with ICSANT, significantly strengthens nuclear security globally and enhances international cooperation in relation to nuclear and other radioactive materials, which is in all of our interests.” Mr. Bono added that ”no nation can solve nuclear security challenges alone”, and “we are only as strong as our neighbours”; he emphasized the role of nuclear science in modern society, the importance of peaceful nuclear cooperation and the need to continually improve and strengthen the legal framework underpinning such cooperation: “International legal instruments might not make the headlines, but they are the backbone to make sure that nuclear and other radioactive material is protected, and that enables us to enjoy the benefits deriving from peaceful uses of nuclear energy.”

The seminar aimed at familiarizing participants with the provisions of both A/CPPNM and ICSANT, as well as with benefits and challenges of joining them, in order to encourage consideration of adherence. It also offered an overview of available assistance from the IAEA and UNODC. The event, which was made possible thanks to funding from Canada, the EU and the United States, gathered some 40 participants from 20 Member States.

This event further corroborated the longstanding partnership between UNODC and the IAEA, and was a concrete example of how – as Ms. Waly stated – “by joining forces around a common legal framework, we can work towards a world free of nuclear terrorism.” 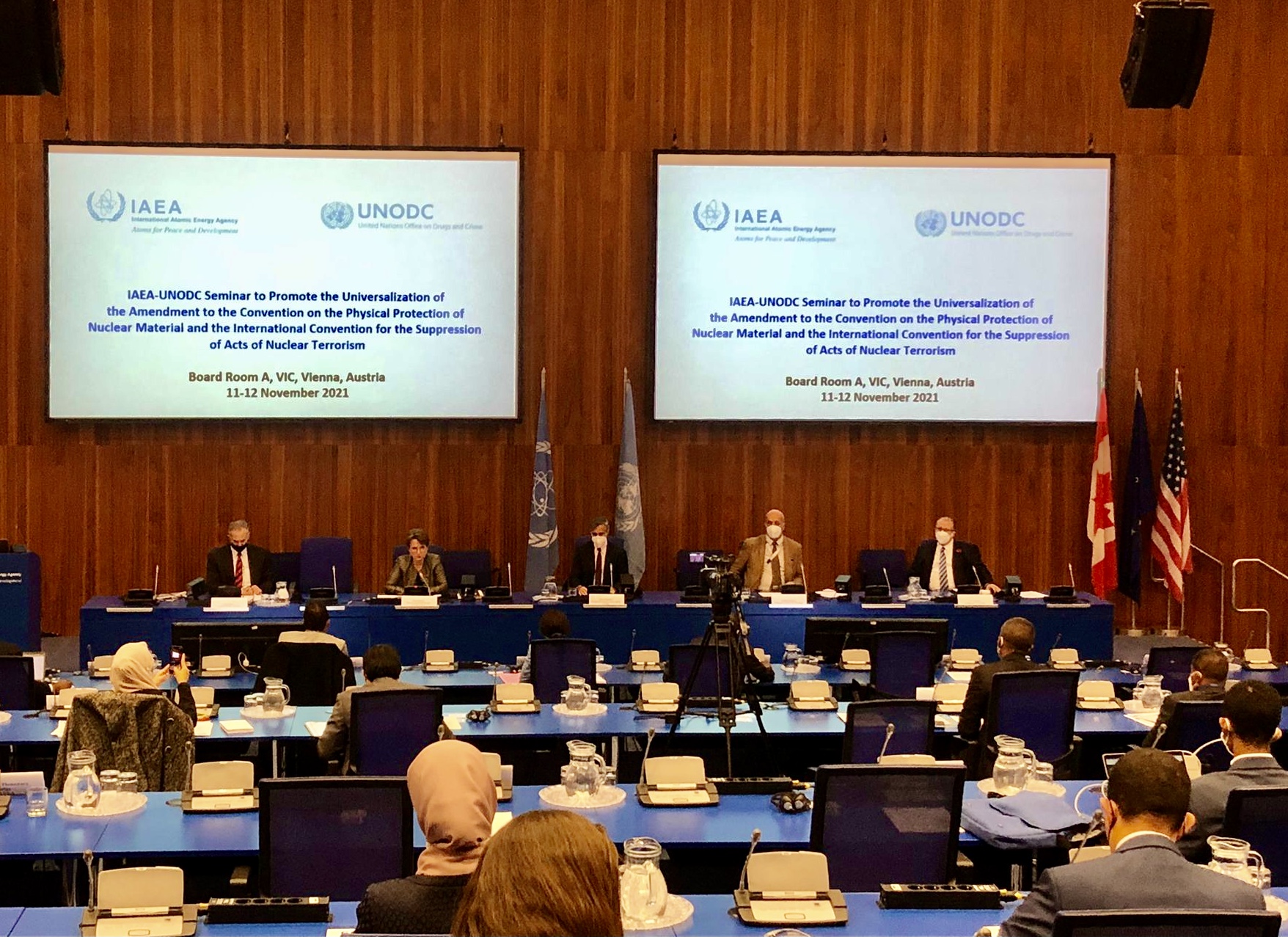