Boi Ngoc is a young woman living in a remote farming village in South East Asia. She has a child, but lives in a hostile family environment, with little means of securing any income. Desperate to support her child independently, she contacts a woman recommended by a relative, who says she can arrange a job as a waitress in a neighbouring country.

Burim is a young Eastern European boy staying in an asylum seekers' camp in a foreign country. He and his brother have been separated from their family for several years. As asylum seekers, they have no right to work in their host country but need money for clothing and other essential items. Their status and prospects are likely to remain uncertain for many years. A man approaches Burim and offers him and his brother the chance to start a new life. 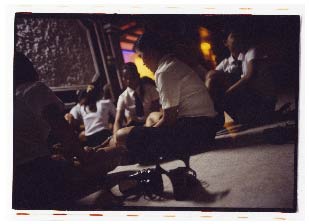 People like Boi Ngoc and Burim are seeking better lives and are therefore vulnerable to fall into the hands of migrant smugglers and human traffickers. Irregular migrants are increasingly resorting to services offered by migrant smugglers. Their modus operandi ranges from simple provision of falsified or counterfeit documents, but also extends to arranging journeys which cost thousands of lives every year. UNODC's research shows that victims of trafficking are often duped by a recruiter who is a relative, a supposed friend or seems like someone they can trust. Traffickers and victims often share the same nationality. In some parts of the world, female traffickers are selected to recruit women.

UNODC helps to make people like Boi Ngoc and Burim aware of these risks by making video and radio spots (public service announcements), which are broadcast in numerous languages throughout the world. UNODC also runs campaigns with NGOs, distributing written information and contacting actual and potential victims of trafficking.

In December 2006, UNODC Colombia received a UN21 Commendation award for its anti-human trafficking activities, which included helping Colombian television to produce a prime-time television soap opera about human trafficking. Aired nightly to millions of viewers, the series exposed common traffickers' ruses, such as Internet scams, and explained where victims could seek help.

Community-led activities are an important prevention tool. The porous border between India and Nepal, for example, is an area of heavy cross-border human trafficking. In 2006-07, UNODC supported NGO initiatives such as the Community Vigilance project, led by local leaders and women's groups, which has mobilized thousands of villagers to detect and prevent trafficking.

In 2006-07, UNODC provided funding for NGOs in Croatia and Bosnia and Herzegovina to run trafficking prevention campaigns among asylum-seekers, a particularly vulnerable group. Counselling was provided to young people like Burim to make them aware of the risks and where they can seek help. 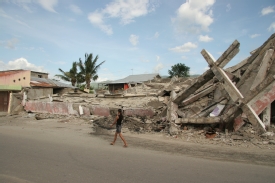 Sometimes the need to move and the threat of trafficking can emerge very suddenly. In mid-2006, during the armed conflict in Lebanon, UNODC became aware that traffickers were targeting some of the 300,000 domestic workers from Sri Lanka, Ethiopia and the Philippines who were left behind when their foreign employers were evacuated. Having abruptly lost their livelihoods and official resident status, the workers quickly became vulnerable. As embassies struggled to assist their nationals, trafficking gangs offered alternative options.

UNODC put an emergency information campaign in place within days: it produced 12,000 pages of information in various languages, including the number of a telephone hotline run by the NGO Caritas Migrant for assistance and support. The materials were distributed in shelters, embassies, churches, shops and markets.

UNODC's prevention work includes raising awareness among policy-makers, law enforcement bodies and civil society. In April 2006, UNODC published the report  Trafficking in Persons: Global Patterns identifying 127 countries of origin, 98 transit countries and 137 destination countries. The sensitive nature of the issue and the lack of systematic action on trafficking worldwide make information collection a challenge, reflecting the unwillingness of some countries to acknowledge that the problem affected them. The absence of reliable global data, in turn, makes it more difficult for governments and international organizations to fight trafficking effectively. This UNODC report was a first attempt to get a clearer picture of the problem. It highlighted the complex nature of trafficking, such as women committing trafficking atrocities against other women, and identified national and regional characteristics of offenders, victims and exploitation. The Report listed states on a scale from "very low" to "very high" as countries of origin, transit and destination.

The report continues to have key relevance in initiating and informing discussions on trafficking in persons. In 2007, to date, the report has been downloaded 260,000 times, making it the most frequently used UNODC report after the World Drug Report.

In 2007, UNODC within the framework of UN.GIFT, launched a research exercise to gather primary data on national responses to trafficking in persons worldwide. This exercise resulted in the publication of the Global Report on Trafficking in Persons in February 2009. The report gathers official information for 155 countries and territories in the areas of legal and institutional framework, criminal justice response and victim assistance services.

For more information about the Global report, click here.

UNODC is developing training materials for law enforcers working to prevent human trafficking and smuggling across borders. Such materials place an emphasis on international cooperation and holistic approaches so as to ensure that responses to trafficking and smuggling do not merely result in new routes employed by the criminals behind these crimes.

To learn about the United Nations Voluntary Trust Fund for Victims of Human Trafficking visit the website of the Trust Fund.