The Paris Pact Initiative - What is it?

Since its inception in 2003, the broad international coalition known as the Paris Pact Initiative (PPI), made up today of 58 partner countries and 23 organizations, including UNODC, has evolved into one  of the most important frameworks for combatting illicit traffic in opiates originating in Afghanistan.

As a well-established platform for consensus building, the Paris Pact functions as an essential bridge between political commitment at the highest international levels and the prioritization of technical assistance interventions on the ground. It is a multi-layered initiative that defines and strengthens linkages between various counter-narcotics actors at the global level. The partnership aims to define policy and provide stronger evidence for coordinated action by all Paris Pact partners.

The concept of the Paris Pact centers on developments along major opiate trafficking routes. Since the inception of the Paris Pact, the partnership has adapted operational responses according to emerging geographic trends, starting with the northern route followed by an expansion along the Balkan route. More recently under the Paris Pact, there is increased focus on certain trajectories of the southern route, specifically the trajectories through specific countries along the Persian Gulf and East Africa. To effectively and comprehensively tackle the threat of opiates, operational responses are needed on 'land, sea and air' under the Paris Pact.

In a balanced and comprehensive manner, the adoption of the Vienna Declaration, the outcome document of the Third Ministerial Conference of the Paris Pact Partners held in 2012, embodies a 'roadmap' for Paris Pact partners, recognizing their common and shared responsibility. 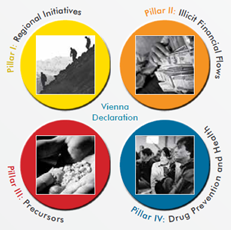 The Declaration guides the partnership on four interlinked pillars for enhanced cooperation:

Pillar III: Preventing the diversion of precursor chemicals used in illicit opiates manufacturing in Afghanistan; and

The two Dimensions of the Paris Pact

1. The partnership itself, with its 80 partners including UNODC, responsible for defining and implementing priorities centred on the Vienna Declaration and based on the principle of the shared responsibility; and

2. The global programme established by UNODC on behalf of the partnership to provide coordination support. The current Phase IV of the GLOY09 programme, supported by the Paris Pact Coordination Unit located in the Division for Operations, has been extended to cover a four-year period (2013-2017) with a total budget of roughly 6.7 million USD.

The Paris Pact Programme and its three Components

Launched on the 10th anniversary of the Initiative in 2013, Phase IV of the Paris Pact programme builds upon the previous phases of UNODC's global programme and seeks to enhance synergies and increase cooperation among Paris Pact partners including UNODC.

1. the CONSULTATIVE MECHANISM , made up of two distinct structures:

- The Expert Working Groups that identify operational priorities for implementation according to the Vienna Declaration pillars; and

2. the field-based RESEARCH AND LIAISON OFFICER (RLO) NETWORK, made up of national staff currently based in UNODC offices in West and Central Asia as well as South Eastern Europe.

UNODC through the Paris Pact Coordination Unit (PPCU) acts in its capacity as coordinator in support of the partnership and the realization of it goals. The Paris Pact programme promotes and facilitates the Initiative's activities to link policy and operational elements.

Download the Paris Pact Report 2015/2016 published in December 2016 and updated in February 2017 to reflect the outcomes of the 13th Policy Consultative Group Meeting.