UNODC and partners counter emerging threats in Kazakhstan and the region 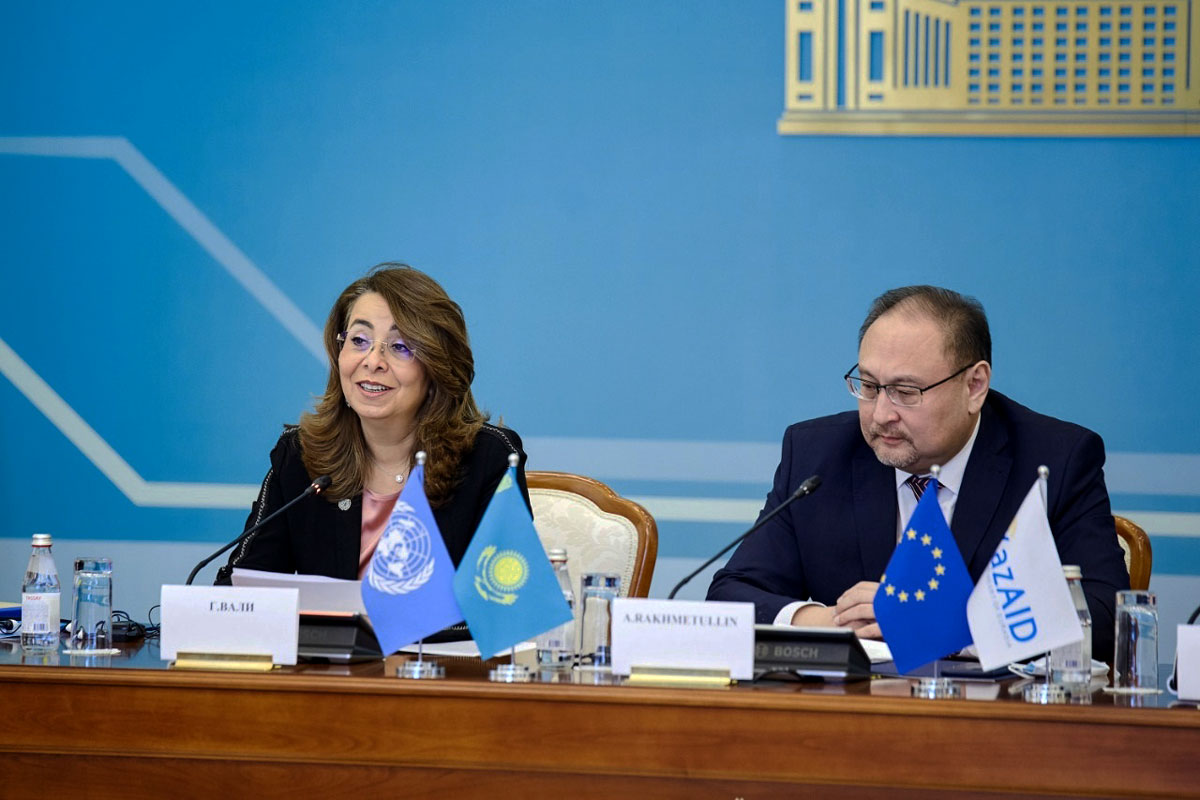 Nur-Sultan and Almaty (Kazakhstan), 6 December 2021 – The return of foreign terrorist fighters (FTFs) and their families from Syria, Iraq or other conflict zones to their country might overstretch the resources of criminal justice and social systems. Moreover, some people associated with terrorist groups may be victims of abduction, coercion, and exploitation, including children, in the first place. In this regard, it is vital to strengthen the institutional capacities of state institutions to investigate, prosecute, adjudicate, rehabilitate and reintegrate those people back to their communities.

In Nur-Sultan, the Kazakhstan Foreign Ministry hosted a High-Level Dialogue on Prosecution, Rehabilitation and Reintegration of Returnees from conflict zones to discuss good practices and lessons learned, and to call for stronger international cooperation in countering the threat of violent extremism and terrorism, in the presence of UNODC Executive Director Ghada Waly.

Ms. Waly welcomed Kazakhstan's commitment to return its citizens from conflict zones and reintegrate them back into society. She said: “The relocation and reintegration of returnees from conflict zones and their accompanying family members are issues with significant implications for a society’s security and cohesion. Kazakhstan’s efforts have set an important example for other Member States to draw lessons from. They have also laid a foundation for future work, as we look to address the many challenges that persist."

Participants agreed that it was crucial to take a broad approach, including rehabilitation and reintegration, to promote the whole-of-government approach, partner with civil society organizations and to adopt innovative solutions to address emerging challenges.

Ms. Waly also attended a high council meeting of the Central Asian Regional Information and Coordination Centre for Combating Illicit Trafficking of Narcotic Drugs, Psychotropic Substances and their Precursors (CARICC). After 10 years of negotiations the Member States signed a regional intelligence agreement. This will have a profound regional and international impact, and will support UNODC’s new strategy on Afghanistan, as the operational arm to counter emerging threats in the region and beyond.

UNODC has been providing technical assistance to member states for the implementation of CARICC activities.

"As new threats emerge induced by COVID-19 pandemic, and further exacerbated by the dynamics of the new political reality in Afghanistan, for instance the diversification of routes of illicit trafficking in drugs, people and firearms with introduction of new contraband commodities such as fake medicines and personal protection equipment, additionally exemplified by the production of synthetic drugs in the region and methamphetamines in Afghanistan, with increasing use of the Darknet for facilitating crime and terrorism, so CARICC must remain vigilant and responsive to the needs of the Member States to address the multi-faceted and inter-connected threats of transnational organized crime, illicit trafficking and terrorism," said Ms. Ghada Waly in her welcoming remarks.