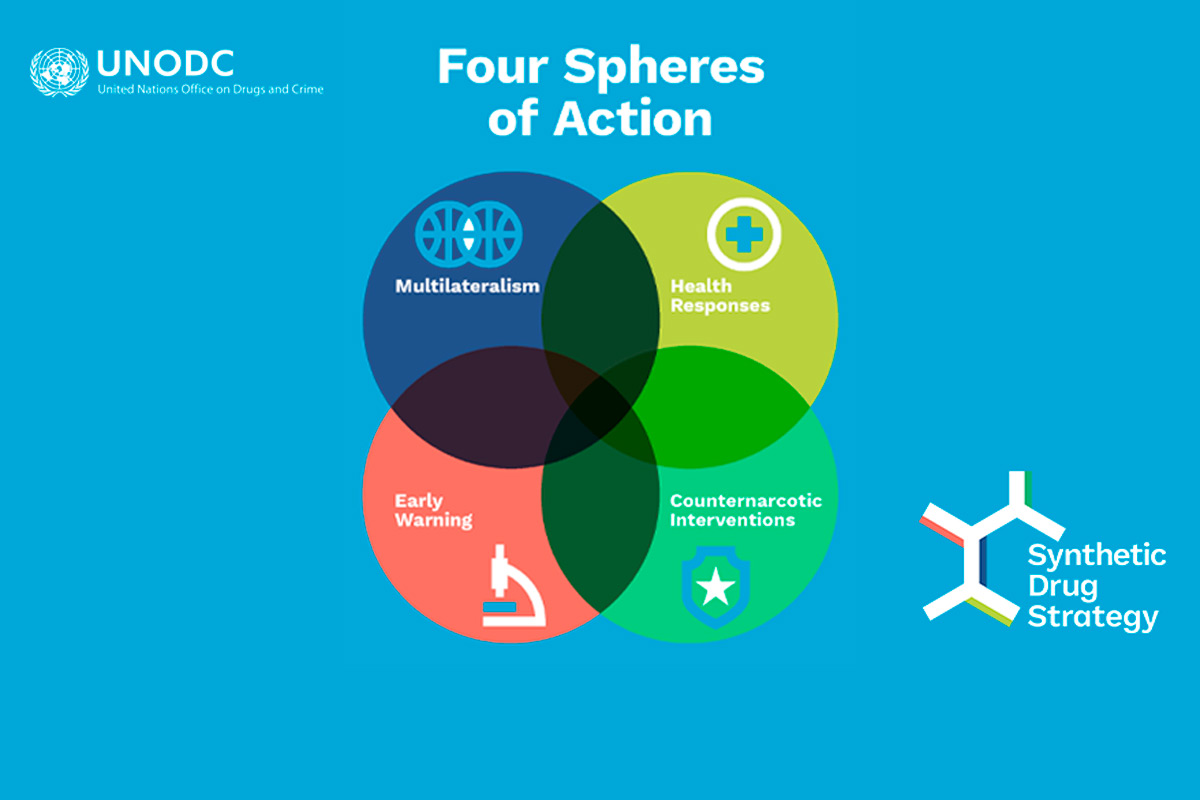 Vienna (Austria), 19 November 2021 – In response to the rapidly-growing problem of synthetic drugs around the world, the United Nations Office on Drugs and Crime (UNODC) today launched a new strategy to support countries in addressing the situation.

The launch of the new strategy comes at a critical moment. The number of new psychoactive substances emerging on illicit drug markets has increased six-fold in the past decade and reached a record high of over 1,000 unique substances in 2020. Annual global seizures of amphetamine-type stimulants increased by 64 per cent in 2019, while opioid use disorder deaths have gone up by 71 per cent over the past decade.

Building on UNODC’s experience and lessons learned from the past years in dealing with the opioid crisis, the new Synthetic Drug Strategy will offer a balanced and comprehensive framework that is grounded in science.

A particular emphasis will be placed on evidence-based responses for women and youth, in recognition of the specific challenges they face.
“This is the time to take evidence-based action to stem the synthetic drug crisis,” said the UNODC Executive Director, Ms. Ghada Waly, speaking at a Commission on Narcotic Drugs (CND) special launch event. “By paying attention to the science and investing in early warning, we can save lives, protect the health and sustainable development of our societies, and help to prevent the next crisis.”

Those challenges have been amplified by the COVID-19 pandemic and its consequences, as economic hardship and growing inequalities have pushed people towards dangerous coping mechanisms.

“Young people trying to cope with poverty resort to opioids,” warned a healthcare worker in Africa, where almost half of all countries have reported non-medical use, seizures or trafficking of tramadol, an opioid painkiller.

At the CND event to launch the Strategy, participants heard that drug overdose deaths in the United States were up nearly 30 percent in the 12-month period ending in April 2021, mainly due to synthetic opioids, according to provisional figures from the National Center for Health Statistics.

Women who use drugs also face specific difficulties, including a lack of availability of necessary gender-specific health and drug treatment services, barriers to accessing existing services, social stigma and the fear of possible legal sanctions in relation to drug use and/or losing the custody of children while in treatment.

Through science-informed processes, evidence, and knowledge, the new strategy will help policymakers to introduce effective policy directions and strategies to disrupt the manufacture and trafficking of synthetic drugs, and to provide access to treatment in different parts of the world.

“I used to think that everyone was just waiting for us to die” said a drug user in Europe, who fortunately received treatment in time.

Taking swift action against the synthetic drugs problem can ensure that others are not left to feel similarly abandoned.