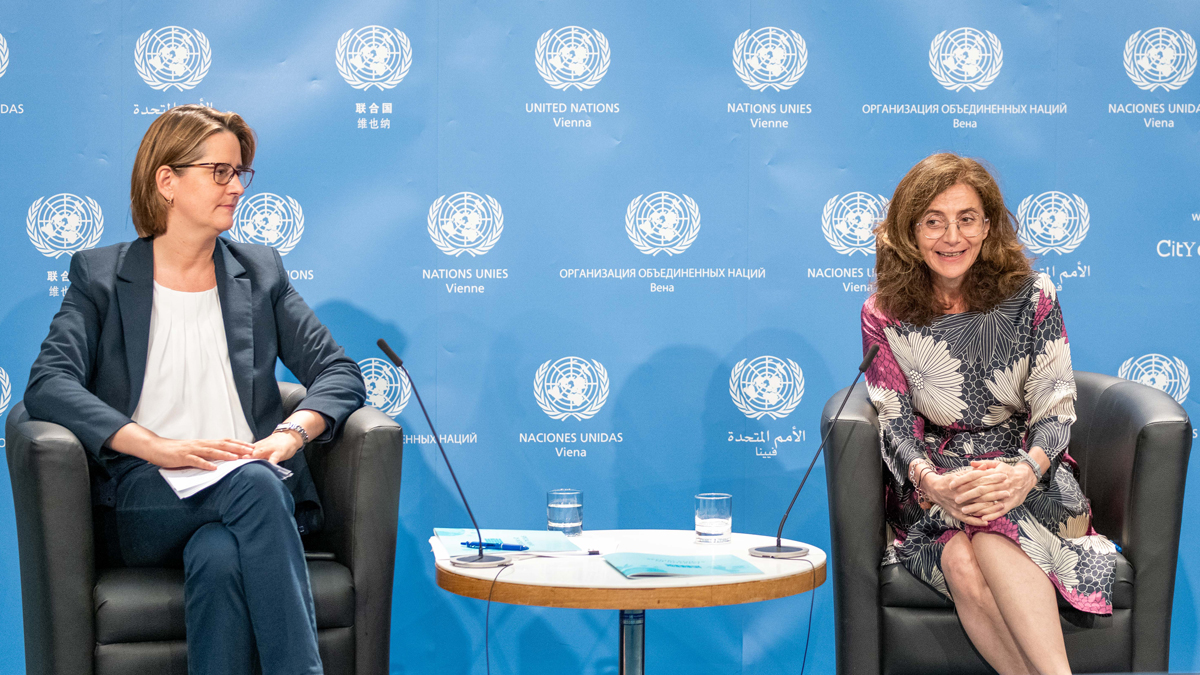 Vienna (Austria), 29 June 2022 — The 2022 edition of the United Nations Office on Drugs and Crime (UNODC)’s World Drug Report was released and launched to the public on Monday alongside a round table discussion featuring some leading experts in the field of drug prevention and treatment.

The report details record rises in the manufacturing of cocaine, the impact of increased permissiveness toward cannabis legalization, the expansion of synthetic drugs to new markets, potential futures for the global opiates market given the recent changes in Afghanistan, and continued gaps in the availability of drug treatments, especially for women.

UNODC has included several calls to action in the World Drug Report 2022 in order to help save lives affected by drug misuse. Of these, some relate to providing care in crises and conflict situations – in line with the focus of the International Day against Drug Abuse and Illicit Trafficking, 26 June 2022, which was “Addressing drug challenges in health and humanitarian crises”. Ensuring access to controlled medicines, guaranteeing evidence-based care, treatment and services, and preventing negative coping behaviours through support are among the calls to action highlighted.

Others are based around leaving no one behind in drug use prevention, treatment and recovery, including tailoring interventions to women, youth and at-risk groups and improving data collection disaggregated by gender and age. Others still call for strengthened cross-border cooperation in order to contain criminal markets.

During the round table discussion held to launch the World Drug Report to an audience of media and civil society, panellists opened up on the major topics contained within the report.

Among the online interventions from the panel, Sara Esmizade, head of the women’s department at Iranian treatment and harm reduction charity Rebirth Charity Society, spoke to the gender disparity in non-medical drug use and the underrepresentation of women in treatment. Esmizade outlined that more could be done to improve gender-sensitive services for drug treatment: “Any gender-sensitive treatment should offer a solution for covering the treatment expenses. Investing in qualitative research on the lived experience of women is also fundamental; we don’t know enough about the root causes of their drug use, such as domestic violence and the basic need for childcare that many women can’t meet,” she said.

Abel Basutu, Senior Drug Programme Officer at the African Union Commission, outlined the impact of new record highs in cocaine manufacture and drug use across Africa, as well as the continent’s status as a cocaine transit hub. Governments on the continent, he said, should work to adopt “balanced drug policy emphasising both drug supply and demand reduction in equal measure”, “strengthen the criminal justice and law enforcement systems to interdict maritime crime and drug trafficking”, and “ramp up prevention efforts, working also with families and traditional communities”.

Drug policy researcher John Caulkins, a professor at Carnegie Mellon University in Pittsburgh, U.S., provided a recommendation for governments considering or adapting cannabis legislation, which has impacted consumption, public health and safety, market dynamics, and criminal justice responses in various world jurisdictions. “Legalized commercial production has led to more frequent use and greater amounts of THC consumed in daily use, increasing the intensity of use rather than prevalence. The recommendation is to be cautious on the legalization of commercial supply, which is a risky and impactful policy path, as a powerful private cannabis sector looks for profits and not to protect public health interests,” he said.

Daniel Brombacher, who heads the global drug policy partnership at the German Agency for International Cooperation (GIZ), elaborated upon the impact of drugs on the environment at local and community levels: “In countries with the major share of illicit drug crop cultivation, the environmental impact is high. For example, illicit crop cultivation is directly and indirectly linked to deforestation as forest land is converted into agricultural land for illicit cultivation, or as an indirect result of it. There are also measurable ‘harm pathway’ impacts on waterways, soils, and biodiversity”, Brombacher explained. “The carbon footprint of cocaine is many times higher than that of sugar cane or even of cocoa beans, so alternative development has a role to play to mitigate the climate impact as well," he added.

UNODC’s research and trend analysis chief Angela Me reflected on the connection between armed conflicts and drugs, particularly how the drug situation may have changed in Ukraine since the conflict intensified: “Conflict can disrupt drug routes and can become a magnet for synthetic drug production. We must monitor the impact of the conflict to ensure Ukraine doesn’t become such a magnet and see how the war in Ukraine could impact the countries around it. Conflict also exacerbates vulnerabilities that lead to some drug users to move towards drug dependence, so we must ensure everyone has access to treatment and prevention tools.”

The 2022 World Drug Report provides a global overview of the supply and demand of opiates, cocaine, cannabis, amphetamine-type stimulants and new psychoactive substances (NPS), as well as their impact on health. This year’s edition of the report spotlights trends on cannabis post-legalization, the environmental impacts of illicit drugs, and drug use among women and youth.