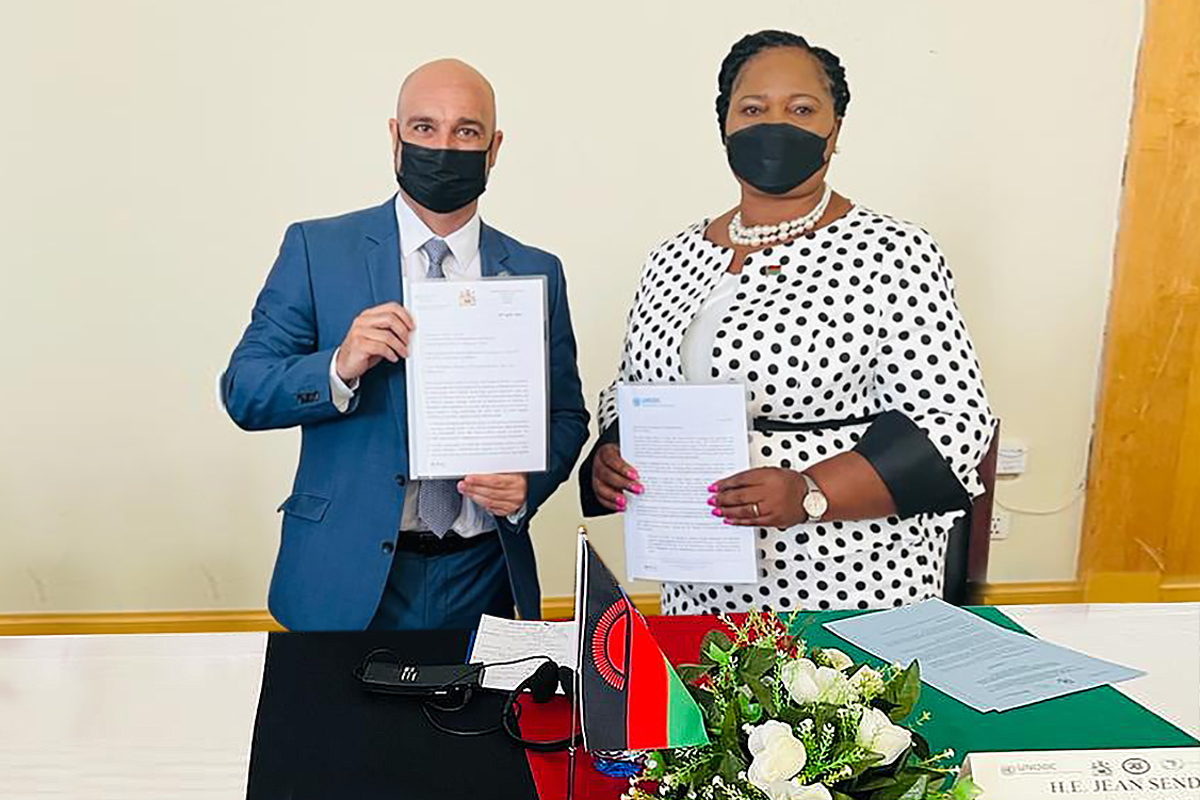 Mr. Marco Teixeira, Head of UNODC Office in Mozambique and H.E. Jean Sendeza, Minister of Homeland Security of Malawi, holding letters signifying a commitment to strengthen cooperation between UNODC and the Government of Malawi. (© UNODC)

Lilongwe (Malawi), 25 May 2022 – Over the last several years, the threat of terrorism has been looming ever larger over Southern Africa. Terrorist groups, once local dangers, have become increasingly global and less centralized, using social media, foreign fighters, and illicit trafficking to support and carry out their acts of terror.

Terrorist groups, including the ISIS-aligned Islamic State in the Central African Province (ISCAP), have established themselves firmly in the region. Indeed, ISCAP membership has soared to 2,000 local recruits and fighters from Burundi, Chad, the Democratic Republic of the Congo, Eritrea, Ethiopia, Kenya, Rwanda, Somalia, South Africa, Tanzania, and Uganda.

Due to the new nature of the threat, states in the region have yet to develop comprehensive counter-terrorism legislation and policies. Nor are the knowledge and skills to effectively prevent and detect terrorist activity – and to bring terrorists to justice – widespread. Member states of the Southern African Development Community (SADC), a Regional Economic Community focused on peace and security, are therefore growing increasingly concerned that terrorist groups active in other regions of Africa will exploit these and other vulnerabilities, such as the marginalisation of minority groups, weaknesses in governance, and security and intelligence structures.

As part of the efforts to combat terrorism in Southern Africa, in April UNODC partnered with SADC, its new regional counter-terrorism centre, and the African Union’s African Centre for the Study and Research of Terrorism (AU/ACSRT) to launch a second phase of assistance for the region, supported by the United Nations Peace and Development Trust Fund (UNPDF).

This new joint initiative builds on an earlier phase of assistance, also funded by China through the UNPDF. Under that project, UNODC and its regional partners provided critical counter-terrorism policy and legislative advice, as well as specialized training and equipment for counter-terrorism and criminal justice officials from the SADC countries most affected by terrorism. This second phase will build on and expand those efforts, sharing international good practices and standards and promoting South-South cooperation with other countries in Africa and elsewhere who have long faced similar terrorism threats. 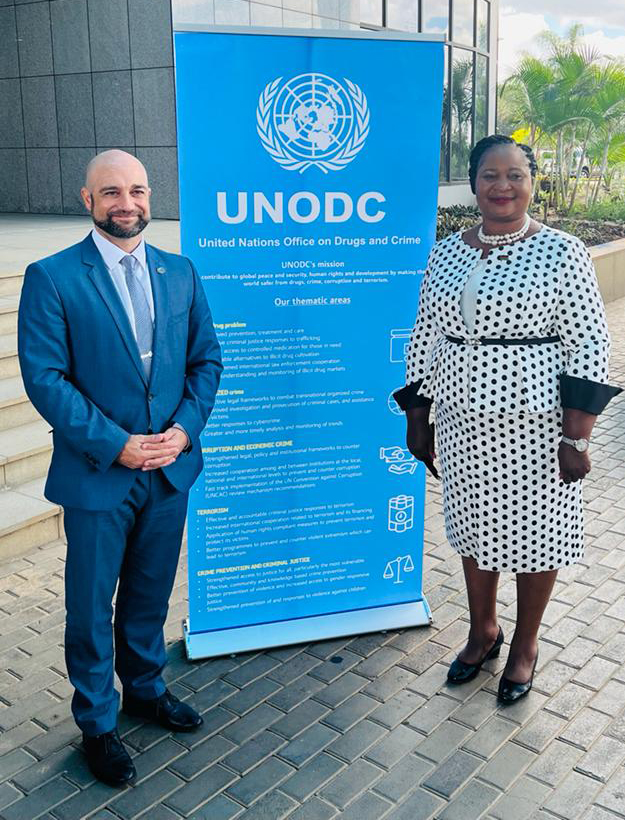 The regional workshop, held from 26 to 29 April and hosted by the Government of Malawi, brought together 14 countries from across Southern Africa. The event provided an important opportunity to examine emerging national and regional threats and challenges, to take stock of the efforts already underway, share experiences, and identify areas for joint action and cooperation to further prevent and combat terrorism and violent extremism in the region.

The Minister of Homeland Security of Malawi, H.E. Jean Sendeza, opened the workshop, highlighting that “Southern African countries are increasingly facing a growing threat of terrorism through recruitment and terrorism financing, including through linkages with illicit trafficking of goods and other criminal activity in the region.”

As noted by Colonel Christian Emmanuel Pouyi of the AU/ACSRT, “the result of continued consultations and cooperation among the partners indicates yet again the common determination to work tirelessly towards the elimination of the threat of terrorism and violent extremism.”

When closing the workshop, the SADC Regional Counter-Terrorism Coordinator, Mr. Mumbi Mulenga, highlighted the importance of partnerships and cooperation to fight terrorism and violent extremism in SADC member states.

The Terrorism Prevention Branch (TPB) of the UNODC is the key United Nations entity with the mandate and expertise to deliver counter-terrorism legal technical assistance to Member States for the ratification, legislative incorporation and implementation of the international legal instruments against terrorism.