Drug Trends and Challenges in Europe in Spotlight at Regional Meeting 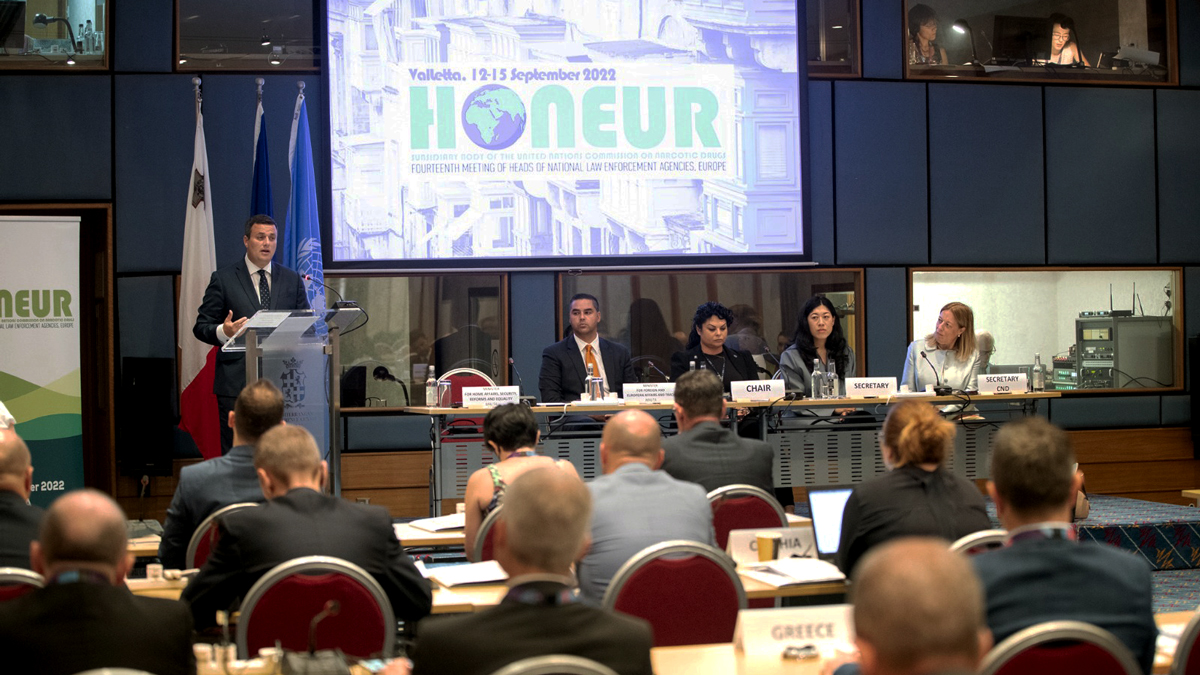 Valletta (Malta), 16 September 2022 - The Fourteenth Meeting of Heads of National Drug Law Enforcement Agencies (HONLEA), Europe concluded yesterday in Valletta, Malta, after four days of rich discussions among practitioners on regional challenges and trends.  The meeting adopted a set of operational recommendations addressing trends in drug trafficking and concealment methods; synthetic drug production and trafficking; alternatives to conviction or punishment for drug-related offences; and the role of regional cooperation platforms in facilitating the exchange of actionable intelligence.

National experts from over 20 countries discussed trends in concealment methods and transportation of drugs at the national, regional and international levels. They shared information on legal, technical and other challenges encountered in addressing the production of and trafficking in synthetic drugs. Meeting participants further reflected on challenges related to the use of alternatives to conviction or punishment for drug-related offences at the pretrial, trial, and post-trial stages.

The meeting also facilitated an interactive discussion on the roles and responsibilities of various law enforcement agencies involved in the exchange of intelligence at the national and regional levels and fostered a rich exchange of views on how regional cooperation platforms can be used therein.

“No country can do it alone. Malta believes in a multilateral approach to address challenges that cross borders,” said Ian Borg, Minister of Malta for Foreign and European Affairs and Trade, who opened the meeting.

Byron Camilleri, Minister of Malta for Home Affairs, Security, Reforms and Equality, emphasized that in order to effectively address and counter the world drug problem, law enforcement authorities “require a “whole-of-society” approach that mobilizes all sectors and industries - from health, justice, social welfare, and education to media and entertainment.”

Ghislain D’Hoop, Chair of the Commission on Narcotic Drugs at its sixty-fifth session, underscored the importance of the HONLEA deliberations, as the recommendations put forward “enable the Commission to be informed about trends and concerns in the regions when taking policy decisions.”

The Executive Director of the United Nations Office on Drugs and Crime (UNODC), Ghada Waly, stressed in her video address that “regional perspectives and cross-regional cooperation” are needed in order to address the world drug problem.”

Held every two years, HONLEA, Europe – one of the five subsidiary bodies of the Commission on Narcotic Drugs – provides a platform for practitioners to discuss the regional perspective of the drug problem. The Fourteenth HONLEA in Europe was the first meeting of the CND subsidiary bodies since 2020 to facilitate - in an in-person format - networking and information-sharing among national experts at the regional level.

The Fourteenth Meeting was organized by UNODC, with the support of the Ministry for Home Affairs, Security, Reforms and Equality and the Ministry for Foreign and European Affairs and Trade of Malta.

Participants discussed practical measures taken at the national level in the implementation of the recommendations adopted by the Thirteenth HONLEA in Europe in 2019. Contributions at the national, regional and international levels to the implementation of the 2019 Ministerial Declaration, adopted by the Commission at its 62nd session, were also on the agenda of the Fourteenth Meeting.

The recommendations adopted by the meeting will be brought forward to the 66th session of the Commission in March 2023, thereby contributing a regional perspective to the interactive deliberations and the action-taking to address and counter the world drug problem.