In late 2005, a police officer in a major European city noticed a young boy begging at the entrance of a large shop. The police officer tried unsuccessfully to communicate with the boy. All he would say was, "I'm a tourist, and I'm waiting for my father". The police officer decided to take the boy to a police station. There, he produced a bad copy of a foreign passport. With the help of a translator, a trained police interviewer established that the boy, named Krasimir, was living in the city with a "friend" and that his family was still in his home country. Based on this information, specialist investigators were tipped off. Three more boys were found and the "friend" was arrested. Interviews took place before an investigative judge and a defence lawyer so that the boys did not have to go to court. The interviews revealed that the boys had been forced into begging by the adult "friend," Two months later, the case went to court and the trafficker was sent to prison. 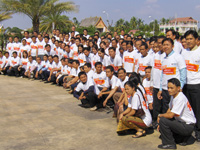 Much of UNODC's work centres on strengthening national criminal justice systems. UNODC's goal is to see a greater number of convictions achieved globally. This means not only that human trafficking must be a criminal offence in the country where an act of trafficking is detected, but also that the law must be enforced.

As in the case of Krasimir, successful convictions depend on the police and others making the right decisions. This can only happen if they have the knowledge and capacity to respond to human trafficking. Things can also go wrong: in some countries, for example, prosecutions are brought but the police fail to protect the identity of witnesses or prevent intimidation of victims and court officials by defendants.

UNODC has helped to develop legislation in many countries. Many human trafficking laws are limited in their application to the sexual exploitation of women and girls. That means they provide no assistance to people like Krasimir or, for example, to women trafficked to work in domestic servitude or sweatshops. Without specialised human trafficking laws, victims are subjected to greater uncertainties while traffickers face reduced risks and penalties.

In 2006, UNODC offered Armenia, Lebanon and South Africa assistance in drafting anti-human trafficking legislation. Criminal justice officials from Burkina Faso, Ghana, Nigeria, Togo, Ukraine and South Africa received specialized training. UNODC assisted NATO in training its senior officials to combat trafficking in persons. Three computer-based training modules to combat trafficking in persons were finalised in Thailand. The Training Manual: Assistance for the Implementation of the ECOWAS Plan of Action against Trafficking in Persons, containing an action plan for West and Central African countries, was launched in 2006.

Vietnam has one of the highest conviction rates for traffickers in the world, thanks in large part to training by UNODC. More than 110 people have been convicted of human trafficking offences. Following a UNODC cross-border cooperation workshop, the police of China and Vietnam rescued dozens of female victims trafficked for forced marriage. More than 50 trafficking rings were disrupted by late 2006.

Chapter 5 of UNODC's Toolkit to Combat Trafficking in Persons dedicates 20 Tools to issues of law enforcement and prosecution of traffickers. Tools address issues from seeking collaboration of offenders to protecting witnesses during proceedings.