5 October 2017 - As part of UNODC's anti-corruption efforts, a series of meetings and discussions with Chief Justices and senior judicial officers are currently taking place across the world ahead of the 2018 launch of the Global Judicial Integrity Network.

To ensure that voices and views from across Africa are taken into account in the development of the Network, a preparatory meeting was held this week in Ouagadougou, following similar events in Asia (Bangkok), Europe (Vienna) and Latin America (Panama). The event brought together some 30 high-level attendees, including eight Supreme Court presidents as well as those from the Courts of Cassation and other representatives of judicial institutions from 15 countries across the region.

Opening the event, H.E. Bessolé René Bagaro, Minister of Justice, Human Rights and Civic Advocacy of Burkina Faso, pointed out that, "Justice is an essential pillar of the rule of law. It is the centre of the construction of democracy and development".

Ousmane Batoko, President of the Supreme Court of Benin and President of the l'Association des Hautes Juridictions de Cassation des pays ayant en partage l'usage du français (AHJUCAF), also addressed the meeting: "The stakes are high, since the future of democracy depends on it. Justice carries the rule of law and if it is rotted by corruption, it would not be able to accomplish its mission effectively and efficiently".

The Global Judicial Integrity Network will be launched to support States parties to fully implement the United Nations Convention against Corruption: the world's only legally binding universal anti-corruption instrument. Article 11 of the Convention emphasizes the crucial role of the judiciary in the fight against corruption and recognizes that in order to play this role effectively, the judiciary itself must be free from corruption and its members must act with integrity. Accordingly, the Convention requires each State party to take measures to strengthen the integrity of judges and to prevent the possibility of corrupting them.

At the meeting, the Resident Coordinator of the United Nations System in Burkina Faso, Metsi Makhetha, highlighted that "justice is seen as the source of hope and that an independent judiciary is key to ensure the integrity of the judicial system". She added that the "issue of justice is not just a matter of justice, it is a matter of security for all of us...and...there will not be peace and development without justice". UNODC's Regional Representative for West and Central Africa, Pierre Lapaque, echoed this, similarly noting: "The integrity of the judiciaries is not an option but an obligation". 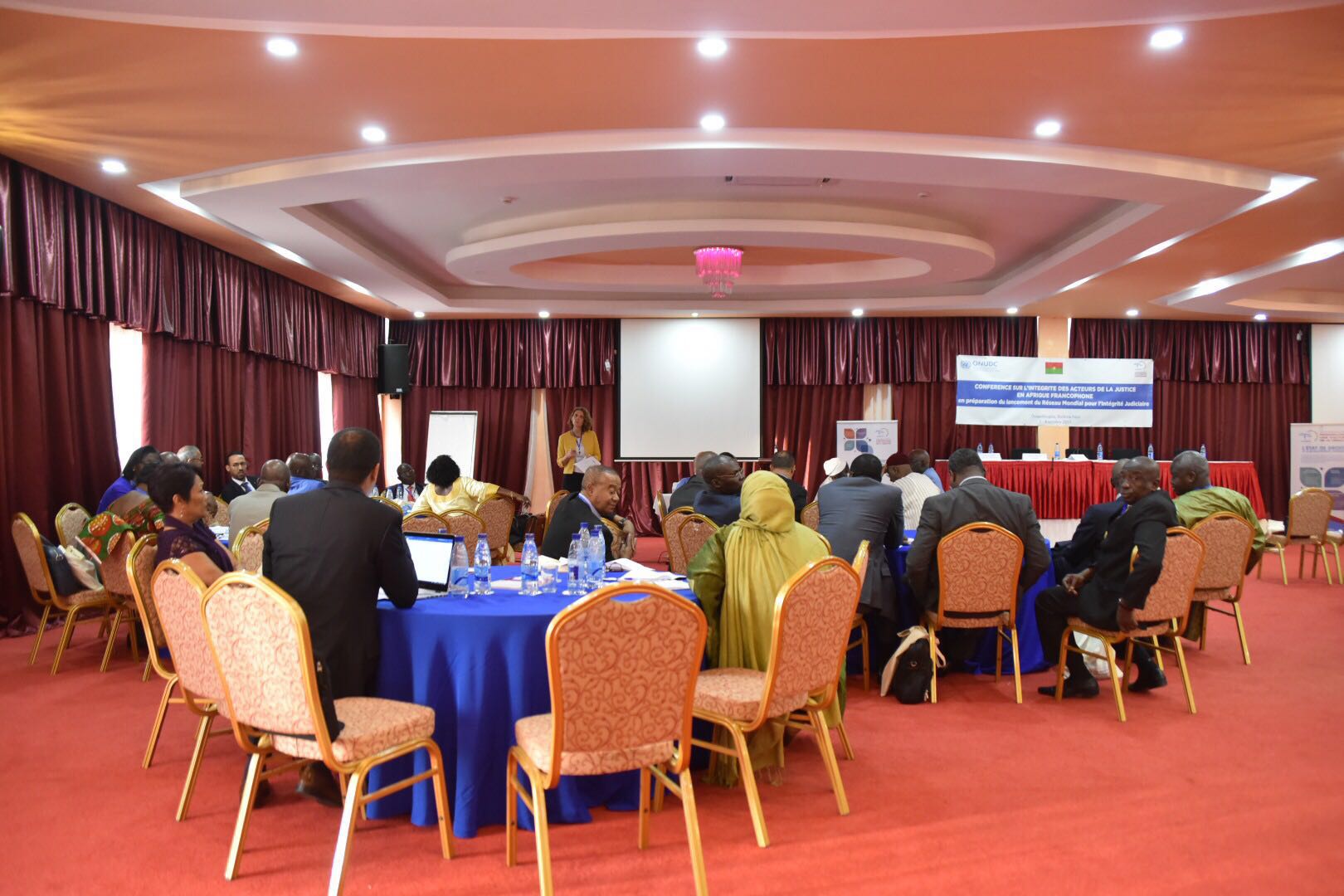 Over the course of the two-day conference, participants discussed challenges and opportunities in their respective countries during a series of interactive sessions. They exchanged ideas on critical issues concerning judicial integrity and on the establishment of the Network. At the end of the event, the participants adopted a set of recommendations to strengthen judicial integrity in their countries marking another step to advance global anti-corruption efforts.

The creation of the Global Judicial Integrity Network is part of UNODC's Doha Declaration Global Programme, which was developed after the 13 th United Nations Congress on Crime Prevention and Criminal Justice in 2015. The Global Programme provides support and technical assistance to Member States across the world in specific areas in order to promote a culture of lawfulness and boost respect for the rule of law, including through the strengthening of judicial integrity and the prevention of corruption in the judicial system.