Line up to live up; how sports can help prevent violent extremism in youth

14 December 2018 - Nations around the world are continuously facing challenges for which no immediate solutions are available, as they work towards the Sustainable Development Goals which the international community has set itself to achieve by 2030. Not only are conflicts increasingly causing uncertainty, but socio-economic conditions are failing to improve in many unstable or impoverished areas where the young generation is coming of age, with limited chances of entering the labour market. Entire neighbourhoods and districts filled with idle and frustrated young people, with few prospects or options, thus become fertile ground for the gangs and extremists trying to recruit them.

Engaging these young people in disenfranchised areas and addressing their needs has become a matter of utmost importance and an integral part of the global struggle to prevent violent extremism (PVE). Using educational, vocational, cultural and - more and more - physical activities, Governments, NGOs and civil society groups are trying to creatively challenge the minds and the bodies of young people, hoping to empower them with the life skills and values which can prevent their descent into a life of violent extremism and crime, and give them a positive outlook on their future.

Sports are now included in development and prevention programmes of numerous Member States and international organizations, as they tap into this well of positive energy which contributes greatly to young people's health and psyche. To encourage this method further, the General Assembly has just adopted a resolution recognizing the role of sport in sustainable development, promoting its importance and recognizing its impact on the empowerment of people.

UNODC's work on Sustainable Development Goal 16 has included an array of crime prevention initiatives, and already embraces the promotion of sports and education. With its Line Up, Live Up method, developed by the Youth crime Prevention component of the Global Programme for the Implementation of the Doha Declaration, sports and related activities are used to effectively build resilience of at-risk youth, strengthening their life skills in order to minimize risk factors and maximize protective factors.

Reflecting on the growing importance of this approach as they consider ways forward, UNODC and UNESCO jointly convened an expert group meeting in Vienna this week, to share with various practitioners experiences on recent and ongoing initiatives, to review key findings, and to generate recommendations on the use of sports in the prevention of violent extremism. While there is no pretence that sport can be the solution to every problem, it is nevertheless considered to be an important vehicle to tackle a number of key risk factors related to crime and violence, including violent extremism. 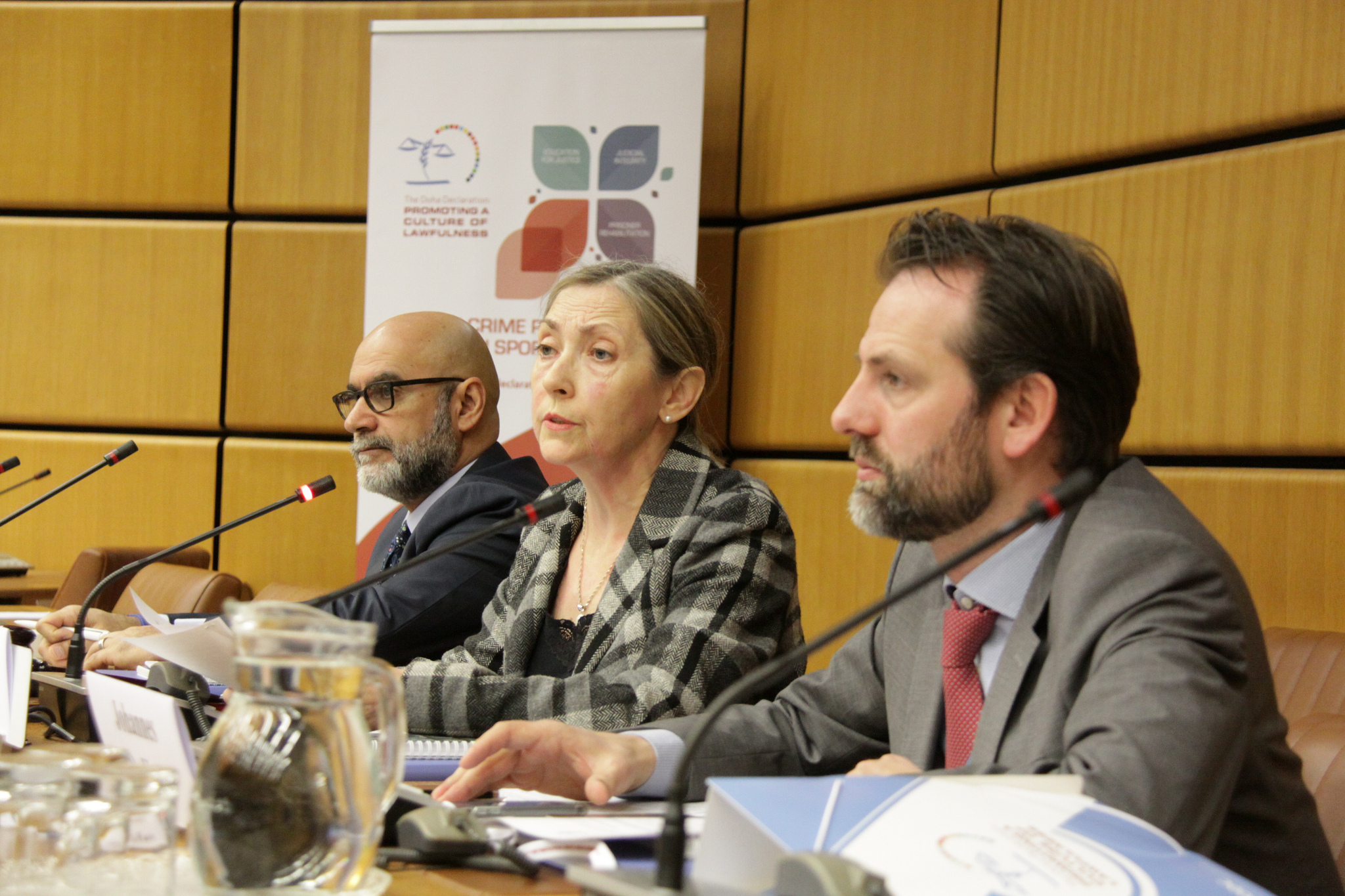 Valerie Lebaux, Chief of the Justice Section at UNODC, launched the discussions with the reminder that beside the physical activity, "sport has the potential to assist with skill development and social integration, giving young people a sense of belonging, loyalty and support." It is meant to be used not only as a way to prevent extremism in young people, but to help improve their lives and increase their wellbeing in real terms. As Masood Karimipour, Chief of UNODC's Terrorism Prevention Branch, put it, "ensuring the development of youth and their access to support mechanisms can make a remarkable impact, and positively contribute to building resilient societies that are considerably less prone to radicalization. Sports can provide an outlet."

Showcasing direct experiences of sports programmes from all four corners of the globe, the expert group concurred that there was no standardized definition of sports-based crime prevention, and that it could - and should - take a number of forms. While football seems to be the great common denominator globally, there is a huge variety of commonly practiced sports (from individual to team, from competition to friendly, etc.), making it a greatly adaptable vehicle through which prevention and empowerment can take place. In sports for PVE, there is no one size fits all.

At the same time, there is agreement on the basic conditions that create risk factors for extremism, in that they are not limited to poverty, dispossession, or even ideological and political goals. In fact, numerous elements are known to drive youth to extremism of different kinds, with these elements generally split into push factors (such as alienation, discrimination, a search for identity, etc.) and pull factors (such as belonging, recognition, power, etc.). This is an area where more and more research is being done and tools are published, including UNODC's most recent Handbook on Children Recruited and Exploited by Terrorist and Violent Extremist Groups: the Role of the Justice System.

With many conditions influencing potential violent extremism, and with many nuances between geographical areas in which youth are considered at risk, experts all agree that the challenge could only be undertaken through a two-pronged approach: simultaneously bottom up and top down. As Christian Bunk Fassov, Political Affairs Officer from the United Nations Office of Counter-Terrorism, explained, "terrorist radicalization occurs at the local level, and ultimately PVE efforts need to reach the grassroots and to be implemented on the ground to be effective. Front-line actors need to be empowered through training, recognition and other support."

In other words, while the theoretical and technical aspects of sports-based programmes are necessarily rooted in the expertise of practitioners on an international level, and while there is a global phenomenon of radicalization spreading through various means, the driving force is mostly local, and there is a strong need to involve the people closest to the problems on a national and local basis. For Lea Koudjou, from the United Nations' Department of Peacekeeping Operations, this was essential for the success of any endeavour: "It's very important to work with local community leaders, and we rely on national staff to do that. They are the people who deal with them on a daily basis, and the sports initiative is the vehicle to create a space for peace within the communities."

Whether they are local or not, involving adults to whom youth can look up is part and parcel of any sports-based initiative. Anne Rehner, from the Federal Ministry for Economic Cooperation and Development in Germany, stressed that "it is very important to work with role models, and the trainers do fulfil important roles, with kids trusting and confiding in them." This is also the experience of Sensei Marva John Logan, from Ryu Dan Dojo Youth Empowerment Centre in Trinidad and Tobago, which specializes in martial arts: "We use local leaders, even religious leaders, and go door-to-door and engage with communities."

In fact, for Mohanned Arabiat, President of Generations for Peace in Jordan, the involvement of the local community should go far beyond participation in the sports activities, and even means enabling young people to experience leadership themselves: "It's about building leaders at the grassroots level, so they gain influence in the society and eventually are able to influence a change in policy. We want to create networks with people who share the same values."

This method is of benefit even in situations of displacement. Nick Sore, from UNHCR, explained that from the perspective of peacebuilding and protection, "sports and games have always been part of our work with refugees, first with improvised equipment, then with organized programmes. Sports is recognized as a tool to achieve our Core Actions protection mandate, and they specifically mention physical and emotional wellbeing."

Despite the myriad examples of successful sport-based programmes around the world in the struggle to prevent crime and violence, and even with an abundance of different toolkits made available by numerous organizations, there was consensus on the general paucity, thus far, of evidence-based research on precisely how sports-based initiatives are working in connection to violent extremism, and how they can be properly assessed and quantified. As UNODC Consultant Katja Samuel explained, "we have less clear evidence on the exact causal relationship between sport and violent extremism prevention." She also warned of the potential pitfalls in the evaluation of its impact, including the oversimplification of indicators, the reliance on misleading data to assess effectiveness, the incorrect dichotomizing of youth into stereotypes, and the need to ensure careful contextualization of interventions.

The expert meeting deliberated a set of concise recommendations on the subject of sport as a PVE tool, to feed into future programming. It will include the organization of evidence, an enumeration of the challenges to be addressed (including for gender considerations), and guidance on how tools and best practices can be further disseminated.

Additional information:
General Assembly resolution as sport as an enabler of sustainable development

In Uzbekistan, UNODC continues to use sport as a tool for youth resilience and post-COVID-19 recovery