Transforming Policy into Action: The Legacy of the Doha Declaration Global Programme 2016-2021

Following the 13th United Nations Congress on Crime Prevention and Criminal Justice held in Doha, Qatar in April 2015, the General Assembly adopted the landmark Doha Declaration in its resolution 70/174. To translate this political declaration into concrete action and contribute to the world’s efforts in boosting the rule of law, the State of Qatar generously funded an ambitious, five-year Global Programme aimed at helping countries achieve a positive and sustainable impact.

The Doha Declaration Global Programme, which was launched in March 2016 and concluded in September 2021, focused on four inter-related components: enhancing quality education for children and youth on the rule of law through its "Education for Justice" (E4J) initiative; preventing youth crime through sports; strengthening judicial integrity and preventing corruption in the justice system; and fostering prisoner rehabilitation and social reintegration.

Intrinsically linked to the 2030 Agenda for Sustainable Development and the 17 Sustainable Development Goals, the success of the Global Programme is best captured by its transformative impact around the globe. Since the Global Programme's inception, more than 2.5 million people from over 190 countries were impacted. This figure includes over 112,000 stakeholders that benefited from direct capacity-building activities, and more than 2.1 million reached through post-activity impact and the use of knowledge tools and materials, including 1.5 million students. Nearly 200 tools and materials were developed, including guidelines, training tools, university-level modules, games, handbooks, manuals, podcasts and other resources. These tools and materials were translated into 15 languages. 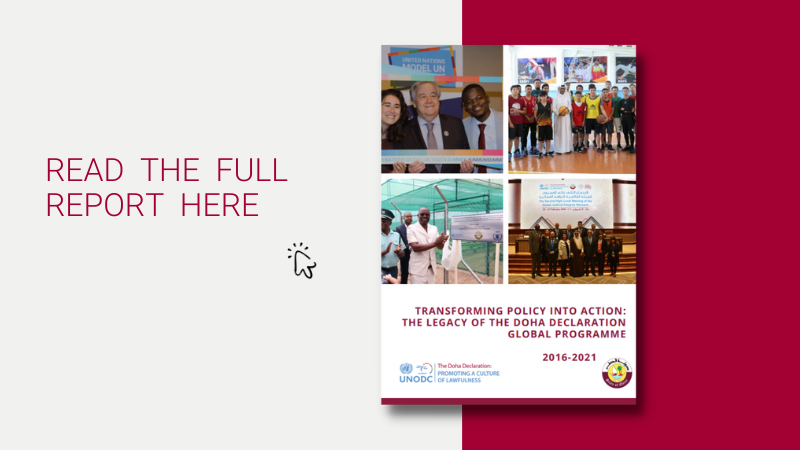