Modern judicial challenges, such as gender and AI, at the heart of debates in Seoul

19 December 2018 - Judicial integrity, one of the pillars upon which rule of law rests, depends on a long list of factors which continues to be adapted in a fast-changing world. While national contexts vary, judiciaries often face comparable challenges in ensuring independence and integrity in their respective countries, and they agree on the need to ensure that guidelines on judicial matters remain current.

While the basics of judicial integrity have been agreed and enumerated in the Bangalore Principles of Judicial Conduct, the guidelines on some topical matters may not be up to the required standards. For example, subjects like judges' presence on social media networks, or cases with gender-related issues, have recently become more relevant to judicial work and are in need of closer scrutiny. 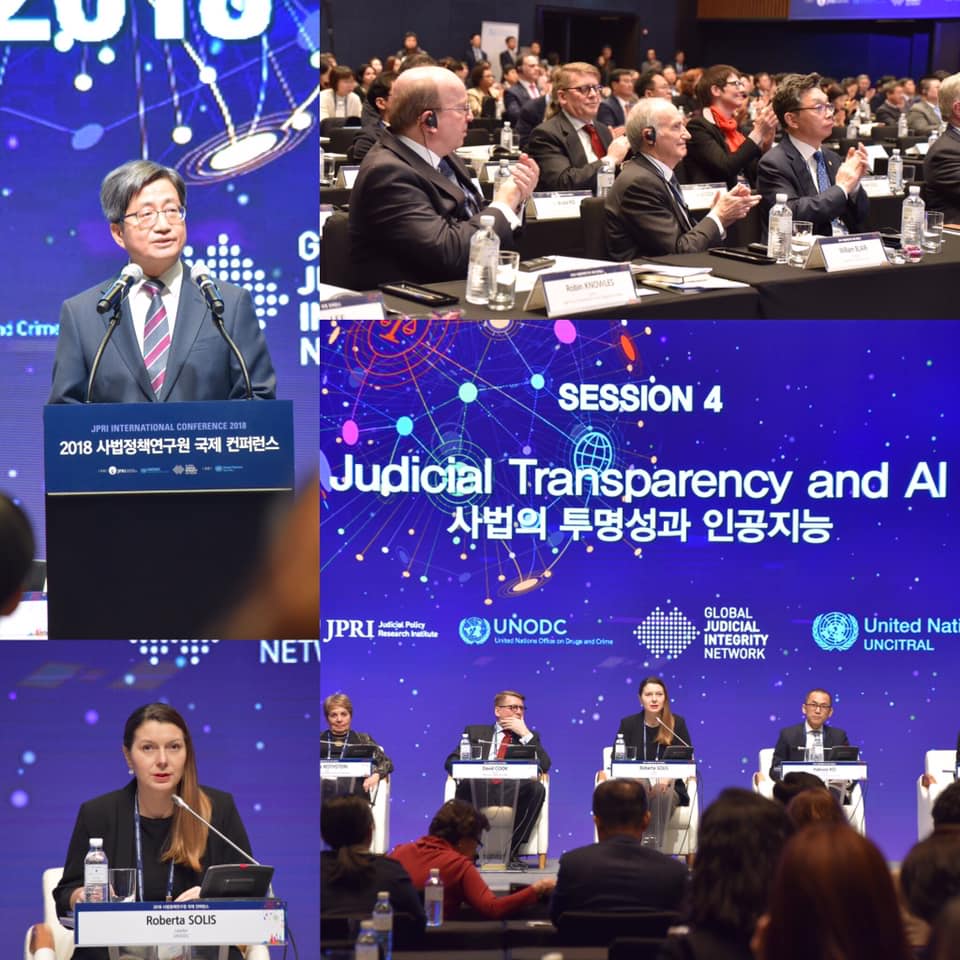 Two big meetings addressed these challenges in Seoul this month. The first, organized by the Judicial Policy Research Institute of the Supreme Court of the Republic of Korea, also celebrated a special milestone with the commemoration of the 70 th anniversary of the establishment of the country's judiciary. Addressing the conference, Chief Justice Myeongsu Kim stated that "the independence of the judiciary is a core value to ensure the freedom and rights of the people through fair and good trials."

Over two days, judges and judicial experts considered various aspects of judicial integrity, the intricacies of complex dispute resolution, the work of specialized courts such as the International Commercial Court and the Maritime Court, and, last but not least, the increasingly important issue of judicial transparency and artificial intelligence. In a session presented by UNODC's Global Judicial Integrity Network, a component of the Global Programme for the Implementation of the Doha Declaration, concerns about the introduction of artificial intelligence into the judicial realm were discussed.

Roberta Solis, UNODC Crime Prevention and Criminal Justice Officer, reminded the gathering of the conclusion reached in a dedicated session during the launch of the Global Judicial Integrity Network, in April 2018 in Vienna: "The main problem associated with digitization and predictive justice is accountability. The new pervasive role of the digital systems requires the development of new forms of accountability to preserve the fundamental values of judicial integrity, impartiality and transparency. The main answer is that technology must be aligned with the Bangalore principles of judicial conduct. If the Bangalore principles must guide judicial behaviour, they must also direct the functioning of information systems and AI. In this way ICTs will be used for justice and not against justice and the global standards that have been built in two hundred years." 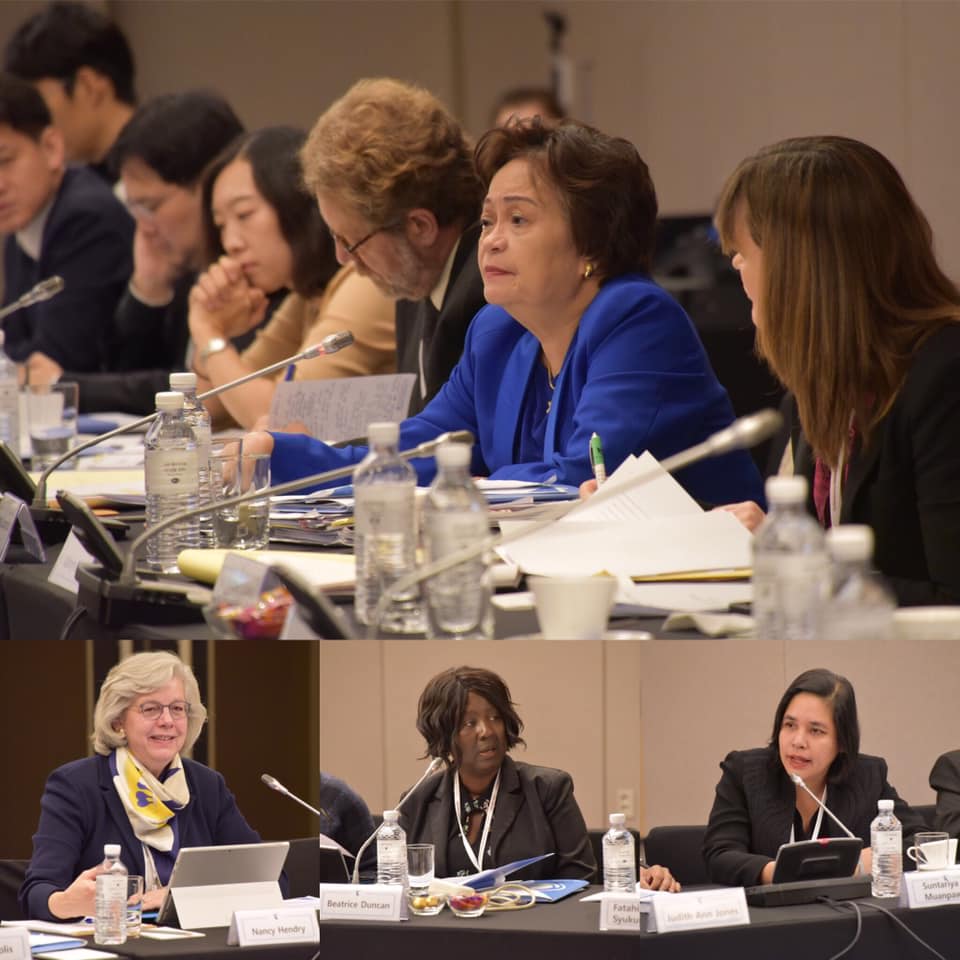 The second event was organized by UNODC in the capital to explore gender issues in judicial matters, a timely subject during the worldwide campaign on the Elimination of Violence against Women, whose theme this year was Orange the world, #HearMeToo. During two days of lively discussions, nearly 40 judges and judicial experts debated ways to improve the recognition of gender issues in the first place, and to identify how gaps or biases, as well as sextortion, sexual harassment, discrimination and stereotyping, could be remedied.

To launch the debate, Nancy Hendry, UNODC Judicial Integrity Consultant, reminded the gathering of the origin and the essence of the problem: "There are many ways in which societies have used gender to draw invidious distinctions and treat some people differently from others. The justice system is a product of its society, and often reflects these social norms. Indeed, some gender biases and stereotypes are so deeply entrenched that they are not recognized as biased or inaccurate."

Judicial experts saw two dimensions to the challenge, both needing attention. Firstly, there are various gender-related misconduct deeds, including gender bias, gender representation, sexual discrimination, sexual harassment, and gender stereotyping; while all these categories are inappropriate, some are more offensive, harmful and egregious. Secondly, there are the relationships and responsibilities which judges hold with their courts and with their communities. For all these considerations, there was consensus that a commitment to the elimination of discrimination based on gender was at the root of the multi-faceted solution.

Beatrice Duncan, Policy Advisor in UNWomen, the United Nations entity whose goal is gender equality and parity in all aspects and sectors of life, stressed the importance of making the issue integral to the hiring process, from the start: "Being grounded in gender issues should form part of the Terms of Reference of every judicial appointment and disciplinary committee. Without that, we are putting on the bench people who do not understand and do not believe in gender equality."

Compounding the problem is the presence of inadvertent gender biases, where judges are sometimes not actually aware of the problem or conscious of discrimination. As suggested by Suntariya Muanpawong, Judge in the Court of Appeal of Thailand, "we need to tackle the problem about understanding of attitudes; it is not just a bias, it is a lack of knowledge of what the problem is."

The context of cultural relativism and cultural challenges was also addressed; experts believe it needs to be considered in some cases, but without being a justification in the matter of gender. 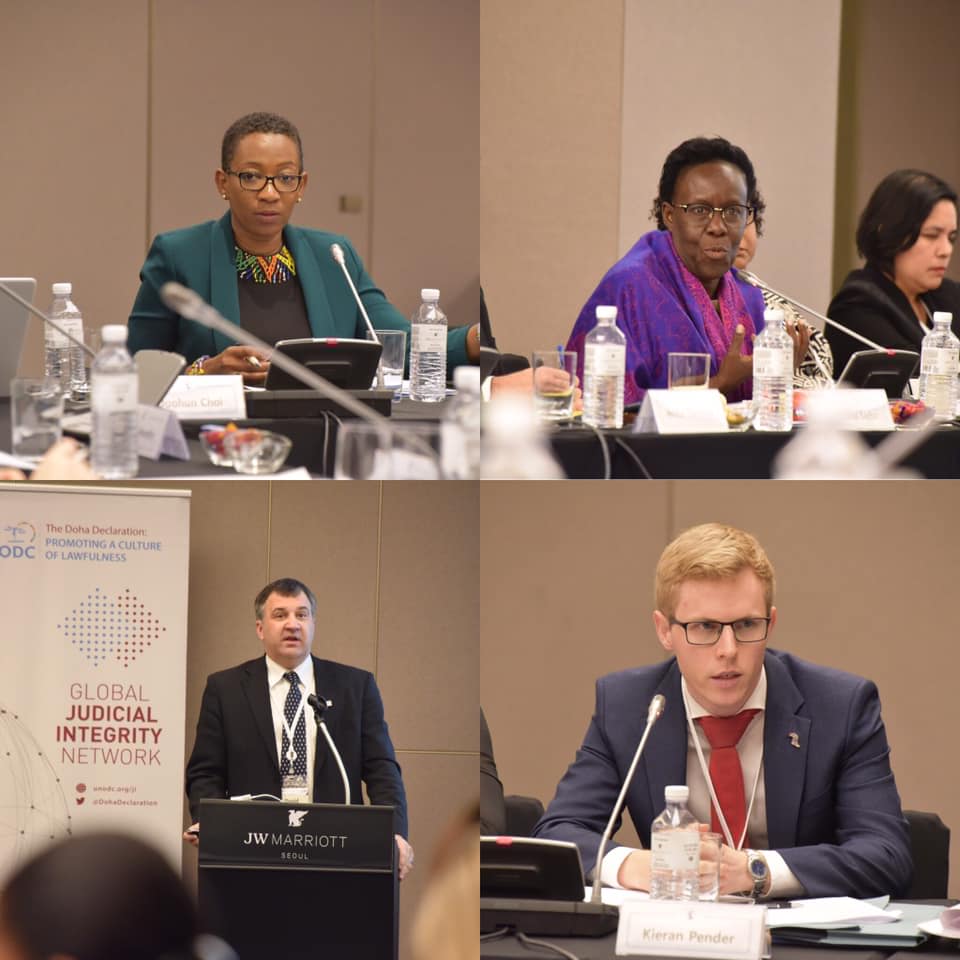 Dr. J. Jarpa Dawuni, Executive Director of the Institute for African Women in Law, believes there is a need for contextualization at times: "We need to be cognizant of gender constructs in different countries, and to allow contextual nuances as we build the framework that we are developing." Other judicial experts believe, however, that there is only one way forward; as Justice Lillian Tibatemwa, Supreme Court of Uganda, explained, "whatever standards we come up with may not go down well with everybody, but culture and religion must be subjected to criticism from a human rights perspective. We must have an in-depth understanding of the impact of patriarchy on gender equality."

Experts found it was necessary to examine and be prepared to deal with all variations of gender-based misconduct. For David Sachar, Executive Director, Judicial Discipline and Disability Commission in Arkansas, there was a need to be specific about each conduct: "Sexual misconduct (with litigants, with witnesses, with pornography, etc.) needs to be included in our definitions. We need solid standards on those, it is not only sextortion."

The issues are varied, as are the people impacted by them; gender-related integrity is important to men and women, and to people of different sexual orientations. What is certain is that whether conscious or unconscious, biases, stereotypes and prejudices cannot be allowed to shape the way judges administer their courts, comport themselves in the courtroom and interpret the law. This is why mainstreaming gender issues into the study and practice of judicial integrity was deemed essential, as was their definition, clarification, and categorization, using specific examples to enhance comprehension for judges and judicial staff everywhere.

In matters of gender awareness, as indeed in matters of judicial integrity, experts concluded that it was essential to ensure judiciaries were exemplary. Kieran Pender, Legal Advisor from the International Bar Association, reflected on the special position held by judiciaries: "Judges in all jurisdictions are seen as ethical examples. If they don't lead by example, and if they are not acting swiftly and effectively, what hope do we have for the other professions?"