12 April 2019 - Prisoner rehabilitation efforts in Zambia were given a strong boost this week with the opening of two new facilities aimed at curbing recidivism in the country and promoting social reintegration. Initiated under the United Nations Office on Drugs and Crime's (UNODC) Global Programme for the Implementation of the Doha Declaration, and supported by the State of Qatar, the two centres offer a unique, inclusive approach to reducing reoffending through in-prison skills training and post-release support.

At the Mwembeshi Maximum Correctional Facility outside of Lusaka, a Multi-Purpose Vocational Skills Training Centre was unveiled on Tuesday by the Minister of Home Affairs, Hon. Stephen Kampyongo; the Commissioner General of the Zambia Correctional Service, Dr. Chisela Chileshe; and UNODC Regional Representative for Southern Africa, Zhuldyz Akisheva.

Speaking at the opening, Minister Kampyongo flagged how the Skills Centre perfectly reflects Zambia's nationwide prison move in recent years from a punitive approach to a rehabilitative one. "The transformation of the Zambia Prison Service into a Correction Service cannot be achieved by mere change of names and declarations. It is a process anchored on a complete paradigm shift in the management of people who come into conflict with the law, and end up being incarcerated." As part of this shift, Minister Kampyongo added that this Skills Centre will act as a lead model for other correctional facilities in Zambia - and hopefully beyond - to replicate. 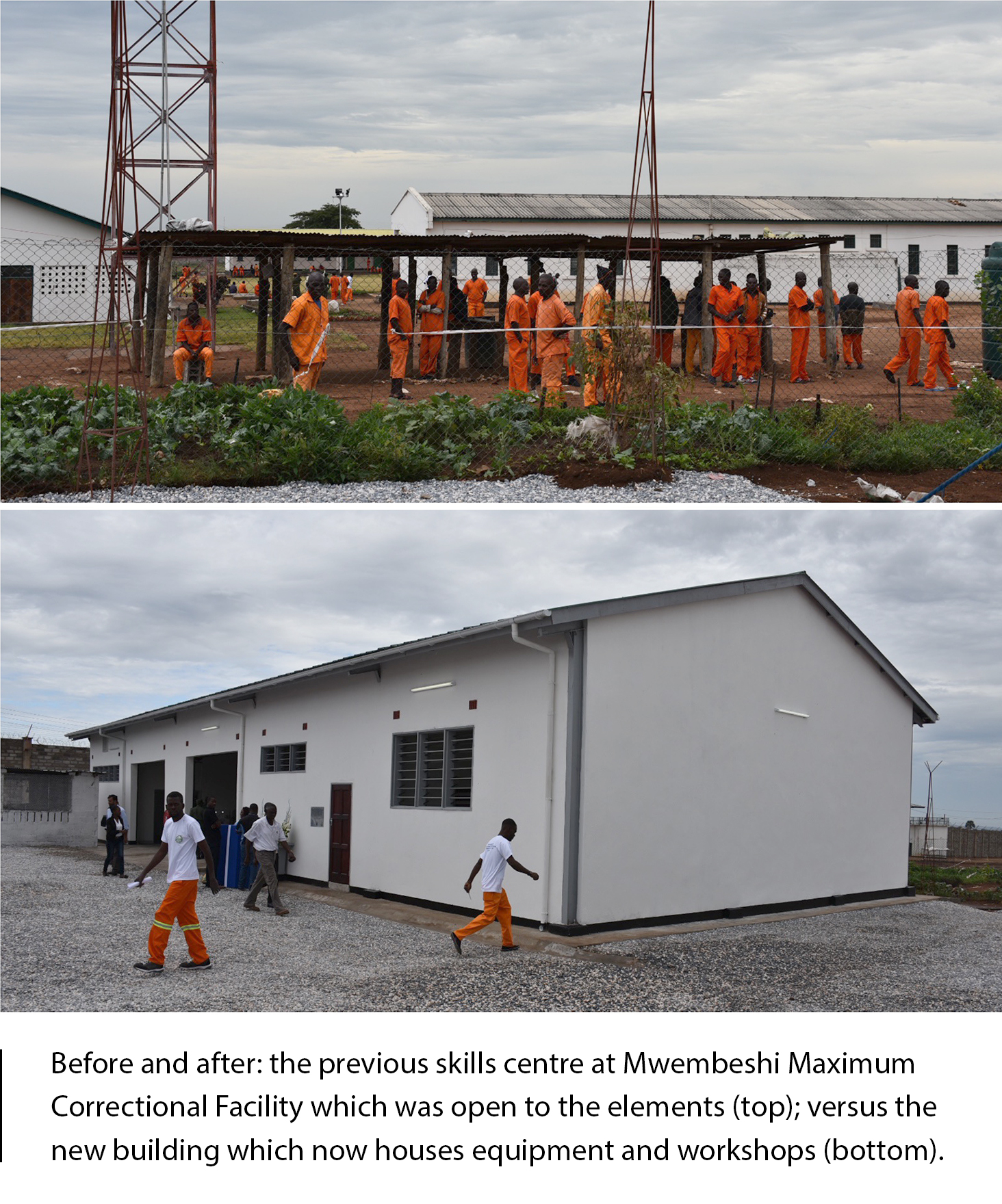 Addressing gathered inmates who will be the ultimate direct beneficiaries of this new centre, Dr. Chileshe meanwhile urged them to embrace the opportunities which are now in place: "You need to grab this with both hands," he encouraged prisoners at the opening who also showcased their multiple artistic skills during the event. He called for the inmates to "maximize their skills" in order for them to better their chances at life success once they leave.

On her side, Ms. Akisheva noted that with high levels of re-offending not only in Zambia but across the globe, "the only effective way of curbing this is through rehabilitation programmes aimed at providing employable skills that will give prisoners new opportunities to contribute to society upon their release." Accordingly, she expressed her hope that the facility "will be used to impart much-needed knowledge and vocational skills to prisoners, that will bring about a new life upon release and a bright future for themselves, their families and society."

The centre will provide training on a range of diverse skills to the near 600 inmates currently in Mwembeshi Maximum Security Prison. Among others, machinery housed here include those concerning carpentry, electrics, brickmaking and auto mechanics. Several of these machines were donated by UNODC to boost opportunities available to inmates. One such item allows prisoners to be trained on cooking oil production as an option for business and employment after their release.

The day after this opening, a new post-release centre was officially opened in Lusaka to go hand-in-hand with the in-prison rehabilitation services being offered and complement those efforts at Mwembeshi. Through UNODC support, the new centre will be run by the Zambian Prisoner Reintegration & Empowerment Organization (PREO). Derrick Malumo, who founded the NGO after having been wrongly convicted and spending six years in prison himself, explained that "the idea for a registration centre was born out of the need to help ex-prisoners who inevitably face stigma and discrimination after their release." As Mr. Malumo elaborated, the centre will not only house an office for the organization to offer their services, it will also include an internet café and a coffee shop to generate additional funds to sustain activities. 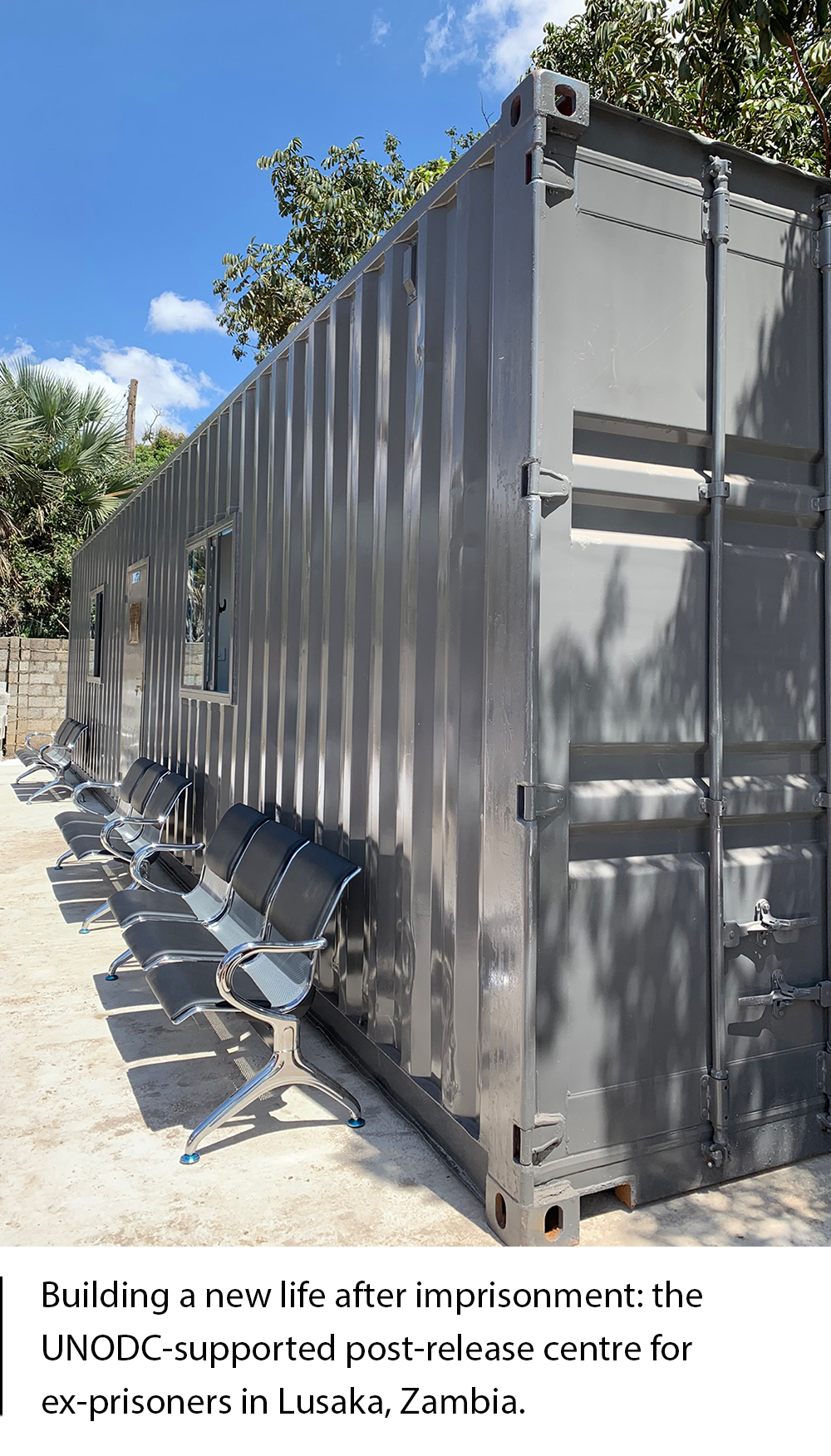 Also speaking at the launch of this post-release centre, the Deputy Commissioner General of the Zambia Correctional Service, Lloyd Chilundika, emphasized how important support is for prisoners once they are released. "There needs to be an organized way that assists people to approach life after their release," he stated. "And this is what is being offered today." He also drew on the late-Nelson Mandela, whose 27 years in prison for his beliefs have been lauded as an example of how anything is possible. The UN's own Standard Minimum Rules for the Treatment of Prisoners is more commonly known as the Nelson Mandela Rules in recognition of his commitment to the plight of prisoners and their well-being.

Ms. Akisheva also quoted President Mandela, reminding the audience of his oft-recalled remark in reference to prisoners that "a nation should not be judged by how it treats its highest citizens, but its lowest ones." Reflecting on this, and building on her statement at the opening of the Mwembeshi Multi-Purpose Vocational Skills Centre the day prior, she highlighted that "when released from prison, ex-prisoners face many challenges and have various reintegration needs such as shelter, food, clothing, capital to initiate projects, educational sponsorship, access to health care, legal issues and others." In response to these, "this UNODC-supported registration centre, will provide the much-needed platform to identify needs of released prisoners and provide the required linkage services or opportunities in the community.

Prisoner rehabilitation is one of the core elements of the Global Programme for the Implementation of the Doha Declaration that was established after the 13 th United Nations Crime Congress in Qatar. Through funding from the State of Qatar, the Global Programme works with countries across the world to build a culture of lawfulness through a range of mechanisms.