Corruption and wildlife and forest crime 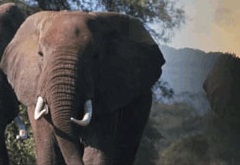 Wildlife and forest crime is a serious and growing problem, posing a significant threat to the environment and negatively impacting economic and social development, security and governance. It comprises the fourth largest illegal trade worldwide after arms, drugs and human trafficking, and frequently links with other forms of serious crime such as fraud, money laundering, and corruption.

Transnational organized criminal networks are moving poached or illegally harvested wildlife using a variety of smuggling techniques, often by means of existing infrastructures and well-developed routes used for the trafficking of drugs, people, weapons, counterfeit goods and other forms of contraband. These gangs rob communities of their natural resources and impact livelihoods and food security of local populations. It is widely recognized that corruption is one of the most critical factors facilitating every aspect of wildlife and forest crime. If wildlife and forest crime, and the corruption facilitating and driving it, are not addressed now, many species of wild fauna and flora will soon become extinct and the criminal networks will continue acting with impunity.

The UN Convention against Corruption (UNCAC) provides the global framework for these efforts embodying innovative and globally accepted anti-corruption standards and provides a comprehensive approach to preventing and combatting corruption in all its forms.