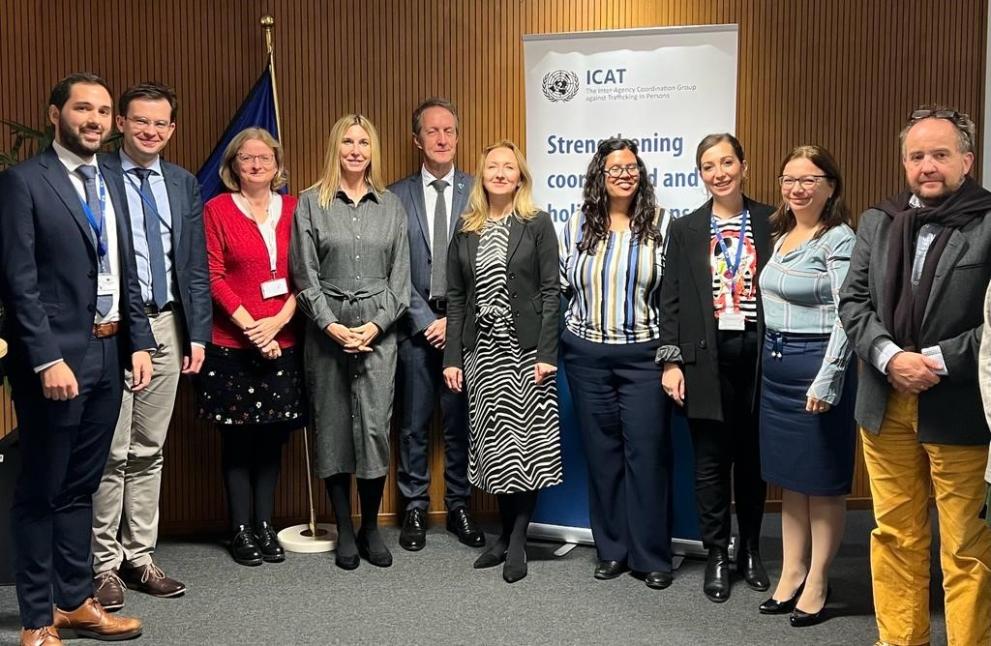 “Immediate coordinated effort is required to prevent human trafficking in conflict situations”, said Martin Fowke of the Human Trafficking and Migrant Smuggling Section at the United Nations Office on Drugs and Crime (UNODC), that co-Chairs ICAT together with the International Centre for Migration Policy Development (ICMPD).

The policy exchange, which was also attended by staff of the European Commission and of the European External Action Service, focused the conversations on the several conflicts around the world and their potential contribution to human trafficking.

Earlier this year, UN Secretary-General, Antonio Guterres, said in a statement that two billion people—approximately one quarter of the world’s population—live in conflict-affected areas, while 84 million people were reportedly displaced because of conflict, violence and human rights violations in 2021 alone.

The meeting also brainstormed on effective measures to prevent human trafficking in conflict and post-conflict situations, drawing lessons from conflicts around the world, and the respective work of ICAT member organizations and the European Union.

“The grave risks posed by human trafficking in humanitarian crises, including conflicts, has recently gained serious attention by the international community,” said Melita Gruevska Graham, the Head of the Anti-Trafficking Programme at ICMPD, who also pointed to the nexus between conflicts and other humanitarian crises, and how these worsen the risk of human trafficking with traffickers targeting people in vulnerable situations.

The policy exchange also raised concerns about the increasing risk of trafficking of people displaced by the war in Ukraine, since February 2022, as also highlighted in an ICAT Press Release in May, which identified children especially those without parental care as being particularly at risk of exploitation and abuse.

With specific reference to Ukraine, the EU and its Member States acted promptly by “setting up a comprehensive response aimed at reducing the vulnerability of those fleeing the war by activating the Temporary Protection Directive in March• and implementing the Common Anti-trafficking Plan”, said EU Anti-trafficking Coordinator Diane Schmitt.

This swift response by the EU, its Agencies and the Member States was instrumental in preventing cases of human trafficking of people affected by the war, while ensuring the protection and welfare of the displaced people who fled to EU countries, she further noted.

The EU Anti-trafficking Coordinator underscored the importance of continuing with such efforts at national, EU and global levels to ensure that the number of human trafficking cases does not increase in the future.

ICAT and the EU Anti-Trafficking Coordinator have met annually since 2019 to exchange on human trafficking policy and effective response measures. This year’s meeting, the first since Ms. Schmitt was appointed in 2021, marked the first time that such an annual exchange focused on a particular thematic issue.