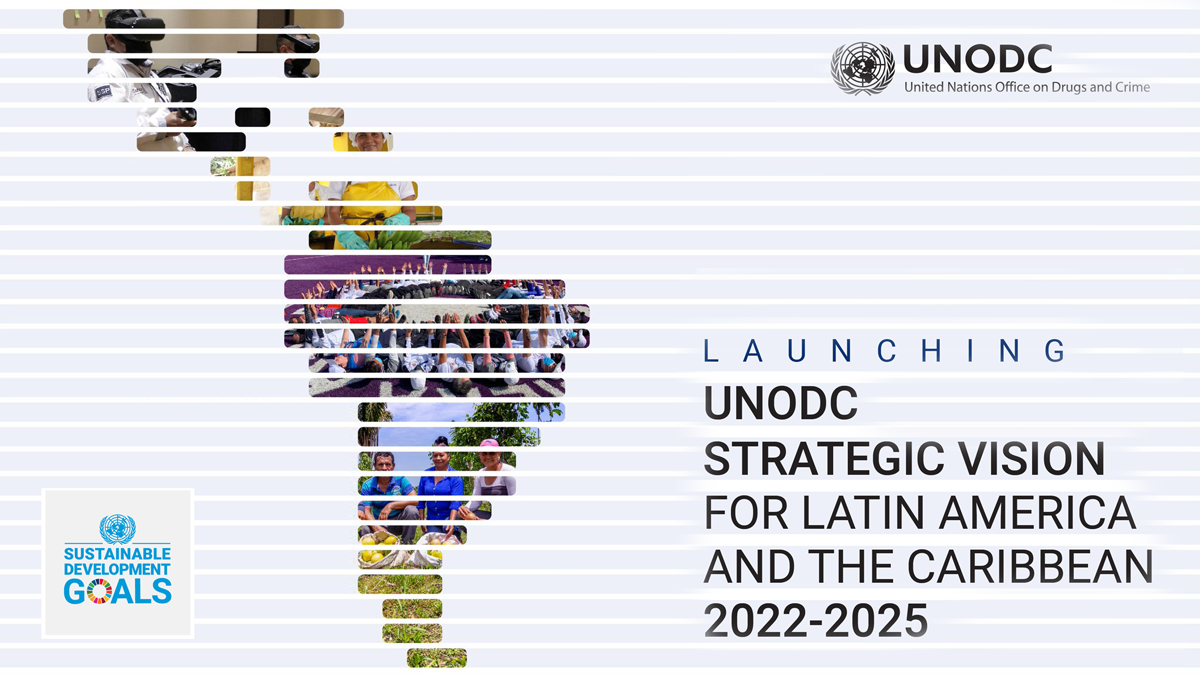 Bogota (Colombia), 7 February 2022 - The Executive Director of the United Nations Office on Drugs and Crime (UNODC), Ghada Waly, launched today the Strategic Vision for Latin America and the Caribbean for 2022-2025 in Bogota, together with the President of Colombia, Ivan Duque, and Ministerial level representatives from the region.
The Strategic Vision provides a roadmap for UNODC’s partnership with Member States in strengthening concerted efforts to prevent and tackle organized crime, drugs, and corruption. The document is the result of a consultation process involving Member States’ institutions, civil society, academia, regional organizations, organizations across the UN system, and international financial institutions.
“We depend on the active engagement of the region and donors, to work with UNODC to promote justice and build accountable institutions that can help to restore trust, increase opportunities and fulfil the promise of more inclusive progress, leaving no one behind,” said UNODC Executive Directory Waly and added that “Now is the time to show vision and take concerted action.” 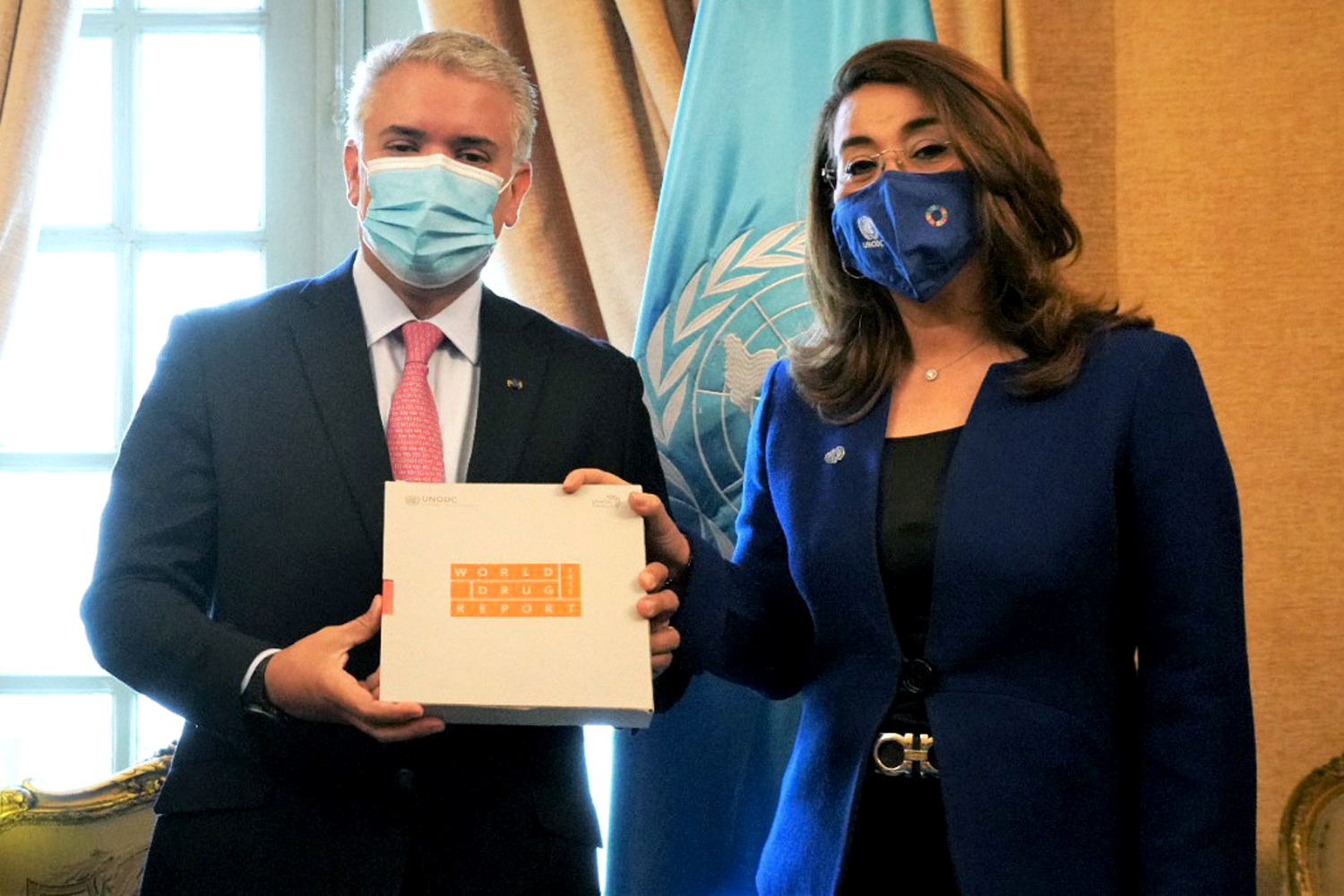 By adopting a people-centered approach, the Strategic Vision is a vehicle for empowering women and girls and enabling young people to access opportunities and to achieve their full potential by enjoying human rights and living in a society free of corruption, violence, and injustice.
The President of Colombia, Iván Duque Marquez, highlighted the progress made through UNODC’s work in Colombia in recent years, which resulted in the expansion of its capacity to address the regional challenges to peace and justice. “Cooperation and multilateralism in the fight against crime has been a pillar of the relevant international conventions. Today, by using those new visions, we want to become stronger and more successful in our actions.”
“We welcome the regional strategy as a paradigm of coordination and teamwork,” the President said and he also welcomed that the UNODC office in Colombia will now become a regional office, as this, Mr. Duque Marquez said, “Validates our country’s effort in becoming a more active member.”
High-level representatives from the countries in the region, including Mexico, Panama, Brazil participated and commented on the priority areas to be addressed within the Strategic Vision, providing examples of their national efforts recognizing the challenges in the region and welcoming the regional cooperation and exchange of experiences.
"In Mexico we are prioritizing international issues. Observance of the Anti-Corruption Convention is a priority, as is follow-up to political declarations stemming from the UNGASS2021 special session," said Gerardo Laveaga, Head of the Transparency Unit of the Secretariat of the Public Function of Mexico.
Judge María Eugenia López Arias, President of the Supreme Court of Justice of Panama emphasized the fundamental role of UNODC, “Not only in promoting the United Nations Convention against Corruption, but also in its permanent advice and consultation."
"The offence is not mitigated or diminished by the thorough criminalization of conduct and the establishment of more stringent sanctions” she continued, adding that “The success of Criminal Law, as an instrument of social control, and its procedural correlation, depends on the presence of an effective State Criminal Policy."
“Brazil has a patrimonial approach based on the financial decapitalization of criminal organizations, said Luiz Roberto Beggiora, National Secretary for Drug Policies and Asset Managment, Ministry of Justice and Public Security of Brazil. This means, he continued, “Taking money from the illicit trafficker and reinvesting it to fight them.”
“Last year, we had over US$ 200 million of assets that were taken from crime,” Mr. Beggiora highlighted, and “The funds that are collected are reapplied both in preventing and fighting drug trafficking, what we call in Brazil a ‘virtuous circle’. This virtuous circle feeds back as more assets are sold, and more resources are generated for the qualification and strengthening of the police forces that seizure these assets.”
The Strategic Vision further highlights Latin America and the Caribbean’s partnership and commitment towards the mandates of UNODC through their role in the international policy arena and by sharing experiences and promoting the South-South cooperation.
The document provides a regional approach for the implementation of the UNODC Strategy 2021-2025. It builds on the region’s three decades of partnership with UNODC and represents a renewed pledge to work together towards achieving the Sustainable Development Goals by 2030.
The Strategic Vision prioritizes four of the five UNODC thematic areas, namely addressing the world drug problem, combatting transnational organized crime, countering corruption and economic crime, and enhancing crime prevention and criminal justice.
Original Webstory taken from UNODC's HQ web page.