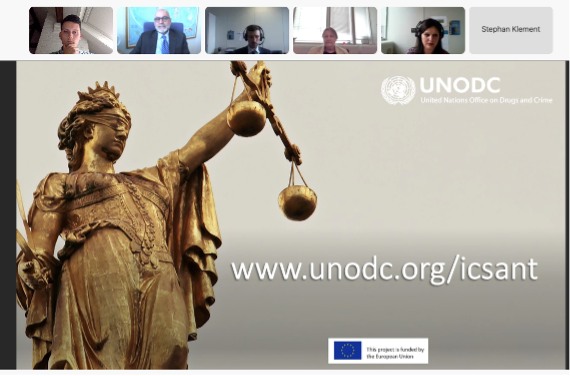 On 30 September 2021, UNODC hosted an online event to launch its new website on ICSANT. Opened with a message from UNODC Executive Director Ms. Ghada Waly and welcome remarks by EU Ambassador Stephan Klement, the event provided an introduction to the tool to over 90 participants from 22 UN Member States and nine international and non-governmental organizations

The International Convention for the Suppression of Acts of Nuclear Terrorism (ICSANT) is an essential element of the international legal architecture designed to effectively prevent and counter criminal conduct involving nuclear or other radioactive material. Due to the technical nature of its scope of application, this Convention might appear complex at first to many, and its content or relevance not easy to grasp.

With a view to raising awareness on this Convention, as well as an understanding of its requirements and main provisions, UNODC developed a website entirely dedicated to ICSANT, which is intended to serve as a repository of all relevant information and existing resources on this international legal instrument. It will be available in all six UN official languages.

The website was developed within the framework of a three-year project, funded by the European Union and jointly implemented with the United Nations Counter-Terrorism Centre of the UN Office of Counter Terrorism (UNCCT/UNOCT). The project’s main goal is to promote the universalization and effective implementation of ICSANT.