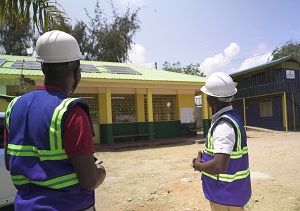 28 November 2022, Nairobi – The first installations of solar panels supported by UNODC and the European Union to “green” the Judiciary of Kenya have been completed at Tononoka Children’s Law Courts and Shanzu Law Courts in Mombasa.

Another nine court stations are earmarked to benefit from solar power through the Programme for Legal Empowerment and Aid Delivery in Kenya (PLEAD) to increase the reliability of power supplies while reducing the environmental footprint of the Judiciary’s operations.

The Judiciary’s greening initiative includes greater reliance on renewable energy, paperless court processes and biotechnology for waste management at court stations and is aligned with the Government of Kenya’s commitment to achieve full transition to clean energy by 2030.

As an initial step, UNODC conducted a survey in 2020 at all court stations in the PLEAD focal counties, and established that the lack of stable power supply was the biggest infrastructure challenge to the functioning of the courts. In support of this green transition, UNODC also worked with the Judiciary’s Building Service Unit in 2021 to conduct infrastructure assessments at 11 court stations.

Provision of a stable, renewable source of energy in its court stations will not only ensure timely delivery of justice for Kenya’s court users through digitalization but also support climate change mitigation. Energy is the dominant contributor to climate change, accounting for around 60 per cent of total global greenhouse gas emissions, according to the UN Environment Programme. 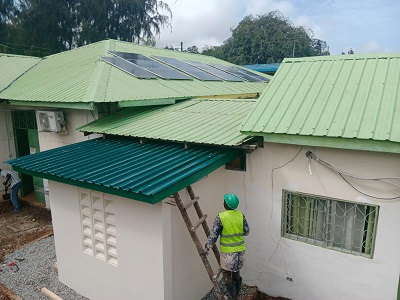 “We’ve embarked on a journey to support the emerging area of ‘green justice’ in Kenya. We’re collaborating with key criminal justice institutions, the European Union and UN entities to devise measures to integrate environmental sustainability within the justice sector while focusing on enhancing legal empowerment for citizens,” UNODC’s Head of Crime Prevention and Criminal Justice for Eastern Africa, Ms Charity Kagwi-Ndungu, said.

Through its Global Maritime Crime Programme, UNODC previously supported the construction of Kahawa Law Courts and Shanzu Law Courts by taking consideration of reducing environmental impacts from an engineering perspective, while having installed solar lighting at a newly constructed police compound in Mombasa.

But UNODC’s support for green justice goes beyond infrastructure. UNODC, through its Crimes that Affect the Environment Programme, has provided significant support to enhance the capacities of judicial officers in Eastern Africa to adjudicate cases of wildlife crimes and other crimes affecting the environment.

For example, three workshops this year supported by UNODC with the National Council on the Administration of Justice resulted in draft sentencing guidelines for Kenya. The guidelines are aimed at improving consistency in the criminal justice system by providing a guided approach to sentencing including in wildlife and environmental related cases.

Earlier this month at the 27th Conference of the Parties of the United Nations Framework Convention on Climate Change, COP27, UNODC highlighted the importance of ecosystem-based climate mitigation and the need to address crimes affecting the environment to increase ecosystems’ capacity to withstand climate change. UNODC also highlighted the importance of addressing illegal trafficking of waste and sound waste management practices to promote the circular economy as a climate mitigation strategy.

To ensure effective delivery of justice, including for those at risk of exclusion and marginalization, UNODC and the European Union will continue to support critical infrastructure improvements at selected court stations in Kenya during a second phase of PLEAD commencing in 2023.