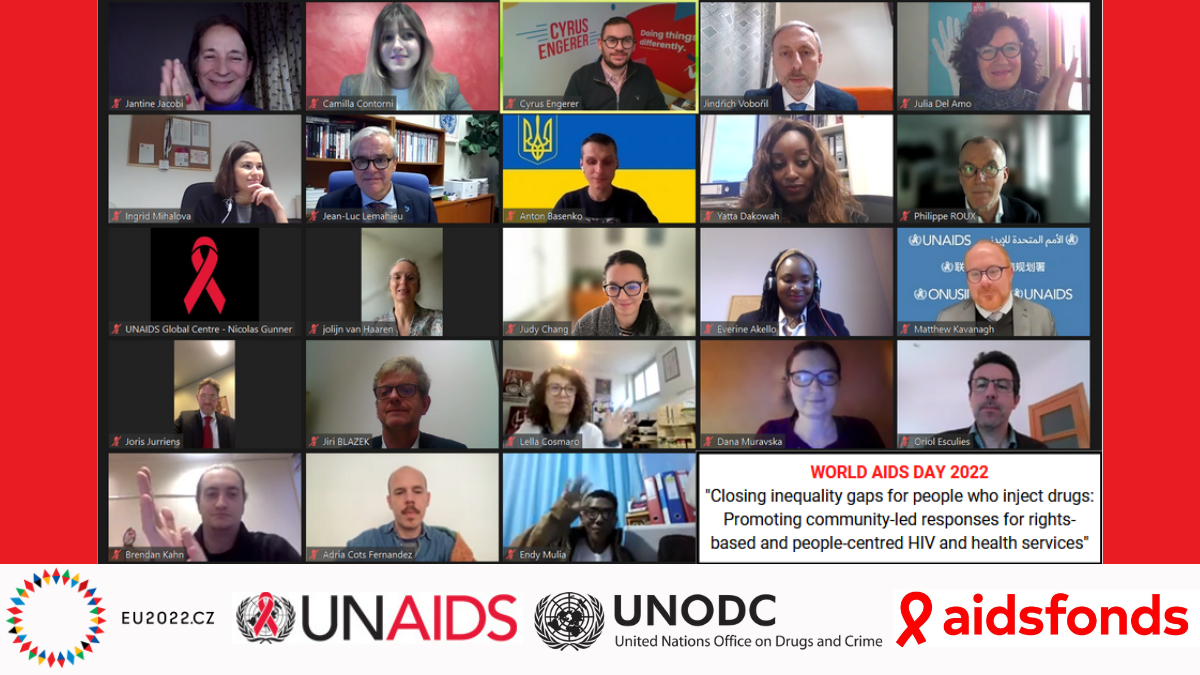 30 November 2022 - Latest data show that the AIDS pandemic is expanding with an estimated 38.4 million people living with HIV by the end of 2021, of which nearly ten million are not accessing life-saving treatment. 10% of all new HIV cases in 2021 (i.e. 1.5 million people across the globe) occurs among people who inject drugs, who face 35-times higher risk of acquiring HIV.

While the figures defer greatly between and within geographical regions, due to differences in response and resources, it is fundamental to close inequality gaps for people who inject drugs and promote community-led responses, to end AIDS and future pandemics, both in Europe and beyond.

To mark World AIDS Day 2022,the Czech Presidency of the Council of the European Union on behalf of the EU, the Joint United Nations Programme on HIV/AIDS (UNAIDS), the United Nations Office on Drugs and Crime (UNODC) and Aidsfonds, jointly organised a virtual high-level event on “Closing inequality gaps for people who inject drugs: Promoting community-led responses for rights-based and people-centered health services”. The virtual event took place on 30 November 2022.

Bringing together around 80 participants from EU institutions, EU Member States, UN institutions, and community and civil society organisations, the event raised awareness about the AIDS pandemic in the EU region, reviewed the inequalities associated with injecting drug use in the EU region, determined effective community-led and rights-based responses, and articulated evidence-based policy directions.

The event comprised an interactive panel discussion, moderated by Mr. Cyrus Engerer, Member of the European Parliament, with interventions from senior representatives of the Czech Presidency’s Government Office, UNODC, UNAIDS, European Commission’s Directorate-General for Health and Food Safety (DG SANTE), Spain, the Netherlands, and the International Network of People Who Use Drugs (INPUD). Attendees actively engaged in the discussions asking questions and bringing in new and different perspectives.

On behalf of the Czech Republic, Mr. Jindřich Vobořil, National Drug Coordinator of the Czech Republic, opened the event, stating that “Czech Republic’s policy aims at promoting a human rights-based approach towards drug policies. Access to basic health care and harm reduction is paramount to save lives, quick and sharp actions are needed to end the AIDS pandemic.”

UNAIDS and UNODC delivered interventions to set the scene, providing updates on the AIDS pandemic and the challenges associated with people who inject drugs at global level. In particular, Mr. Matthew Kavanagh, UNAIDS Deputy Executive Director a.i., highlighted the inequalities driving the AIDS pandemic and articulated three main actions needed to get the HIV response back on track, including addressing laws & policies that stigmatize people, increasing funding for the AIDS response and building & strengthening community-led responses. Focusing on the drug demand perspective, Mr. Jean-Luc Lemahieu, UNODC Director for Policy Analysis and Public Affairs, reminded participants that “To end AIDS by 2030 and to address associated challenges for people who inject drugs, including people in prison settings, we must scale up evidence-based and community-led harm reduction services, while addressing existing stigma, discrimination and punitive laws, policies, and practices”.

During the panel discussion on EU policy implications, Ms. Judy Chang, INPUD Executive Director, pointed out that “If we learnt anything from the HIV movement, you would not get there without communities. A commitment to true equity means that those with resources and power should be actively working to swift power and resources towards those who historically have had less”.

In parallel, Mr. Philippe Roux, Head of Unit on Cancer and Health in all policies at DG SANTE, stressed the readiness of the European Commission to support EU Member States in upscaling the efforts made at national level, and transferring good practices across Europe and beyond, including through the new EU Global Health Strategy. Analyzing the state of affairs within Spain, Dr. Julia Del Amo, Director of the Division for the control of HIV, STIs, Viral Hepatitis and TB at the Spanish Ministry of Health, confirmed that “The Spanish social Pact against Stigma and Discrimination associated to HIV is a tool to close the inequality gaps for people who inject drugs”. Finally, Mr. Joris Jurriëns, Head of the Health and AIDS Division at the Netherlands’s Ministry of Foreign Affairs, underlined that “People who use drugs need care and support. Dignity for who they are, their story and choices in life are crucial in preventing more harm for themselves, their families and society. This is of great value in preventing new HIV infections”.

Among the most important takeaways of the event, speakers referred to the importance of increasing the political support to end the AIDS pandemic as well as the allocation of funding dedicated to quality HIV/AIDS treatment, care and prevention and harm reduction activities, involving civil society organisations and communities in the responses, minimising risks for particularly vulnerable populations, promoting universal access to healthcare, and strengthening cooperation to step joint actions.

Recording of the event is available here: