On 10 March 2022, for the very first time, we celebrated the International Day of Women Judges pursuant to the recent United Nations General Assembly Resolution 75/274 of 2021. The establishment of the International Day marks an important milestone in global efforts to ensuring gender equality and builds upon the ongoing efforts of the Global Judicial Integrity Network in addressing gender-related judicial integrity issues. The General Assembly Resolution explicitly notes with appreciation the work of the Global Judicial Integrity Network of UNODC “to incorporate women’s representation issues into judicial systems”.

With its mandate rooted in the UN Convention against Corruption, the Global Judicial Integrity Network has been emphasizing the crucial role of the judiciary in fighting corruption. Fair gender representation strengthens the judiciary. Women judges contribute to the quality of decision-making and help to build trust in the judiciary. The fight against corruption and other crimes can only be successful if the judiciary is inclusive, diverse and offers different gender perspectives.

On the occasion of the International Day, UNODC organized a special high-level event to celebrate women and gender champions in the judiciary and law enforcement. At the event, UNODC launched its new initiative, “Women in Justice/for Justice”, to promote gender balance and gender responsiveness across the spectrum of justice. The initiative will encompass calls to action to: advance women’s representation and leadership in the justice sector to promote integrity and gender-responsive criminal justice; improve the existing knowledge base to support responses; and celebrate “Women in Justice/for Justice” leaders, through an awareness-raising campaign which will be continued throughout 2022.

The ongoing work of the Global Judicial Integrity Network

Gender-related judicial integrity issues, including unequal gender representation, have been among the priority areas for the Network’s efforts since its launch in 2018. Among other work, the Network has organized numerous conferences, sessions or webinars on the topic, developed a dedicated issue paper, and published opinion pieces, podcasts and other relevant resources. You can access all these resources and learn more here. 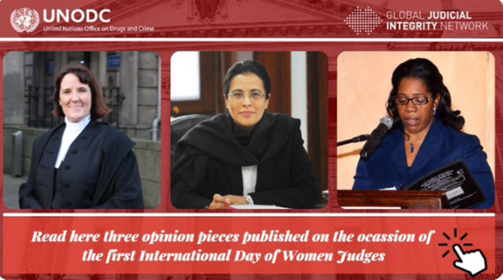 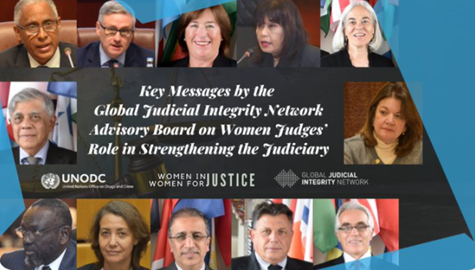