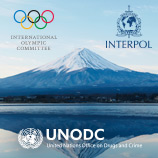 Tokyo, Japan - On 15 and 16 May 2019, with a view to supporting efforts aimed at detecting, investigating and sanctioning competition manipulation in sport, the United Nations Office on Drugs and Crime (UNODC) worked with INTERPOL and the International Olympic Committee (IOC) to deliver a workshop and training for over 80 participants from the Japanese Olympic Committee, the Tokyo 2020 Organising Committee and the Olympic movement, 2019 Rugby World Cup officials, and representatives from Japanese law enforcement and government.

Morinari Watanabe, IOC Member and President of the International Gymnastics Federation, and Pâquerette Girard-Zappelli, Chief Ethics and Compliance Officer, IOC, highlighted how Japan and the IOC were addressing the threats to integrity in sport as part of the Tokyo 2020 Olympic Games. Ben Rutherford, Senior Legal Counsel and Integrity Unit Manager of World Rugby presented the efforts to tackle the threat of competition manipulation as part of preparations for the 2019 Rugby World Cup in Japan. The workshop and training also included experts from Sportradar, as well as international investigators.

Sessions involved discussing the development and implementation of reporting mechanisms to detect wrongdoing in sport in Japan, which builds on work currently under development by the IOC and UNODC, as well as reviewing Japan's legislation in relation to the sanction of competition manipulation.

Detecting corruption and crime in sport key to protecting its integrity