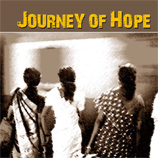 Balmani - a young girl from the rural part of Jharkhand (a State with a high number of human trafficking victims) who received livelihood training in housekeeping and is now able to support her mother's medical treatment.

Chandni - a 14-year-old girl from Kishanganj, Bihar (another major source State for human trafficking), who narrowly escaped being sold to a 45-year-old stranger for marriage.

Jamila - a caregiver from a boys' shelter in Calicut, Kerala, who has learned to view children under her care as 'individuals needing care and protection' and not as 'problem cases'.

15 July 2011 - These are some of the people one meets while following the 'Journey of Hope', a publication compiled by the UNODC Regional Office for South Asia to showcase initiatives to combat human trafficking in India, where a large number of people fall victim to such trafficking.

In March 2008, UNODC embarked on two projects to combat human trafficking and provide support for victims in India: one was aimed at providing assistance to trafficking survivors in order to secure their legal and human rights; the other was designed to provide quality care and support services to vulnerable children at risk of physical and sexual abuse and comprehensive rehabilitation opportunities to trafficking survivors.

UNODC implemented both projects in collaboration with the Ministry of Women and Child Development, the Government of India, the governments of individual States and non-governmental organizations in the States of Andhra Pradesh, Bihar, Jharkhand, Karnataka, Kerala, Tamil Nadu and Uttar Pradesh, with the support of the United States Agency for International Development (USAID). The experience gained under both projects has now been documented in ' Journey of Hope', an attempt to bring together and visualize stories of hope, endurance and voices from the field.

The 'Journey' begins in the States of Jharkhand and Bihar in northern India, highlighting the factors that make girls and  women vulnerable to trafficking. Case studies demonstrate how communities and local organizations are working to prevent human trafficking and rehabilitate survivors through various means, such as livelihood training, education and awareness-raising programmes, village vigilance committees and local advocacy.

In southern India, the 'Journey' takes the reader to Government-run shelters in the States of Tamil Nadu, Kerala and Andhra Pradesh, which provide temporary shelter to women and children who have been rescued from human trafficking and other difficult circumstances. The homes work to restore the confidence, hope and psychological well-being of women and children who have had harrowing experiences at the hands of traffickers.

The publication explains how psychosocial support training programmes have helped shelter staff and caregivers to become more sensitive to the psychosocial needs of the residents and have taught them practical techniques for addressing those needs. UNODC hopes that the inspiring individual stories in the publication will serve to show that is possible to win the fight against human trafficking. Lessons learned from the projects will serve to strengthen initiatives implemented elsewhere to combat human trafficking and provide support to victims.

Under the Protocol to Prevent, Suppress and Punish Trafficking in Persons, especially Women and Children, supplementing the United Nations Convention against Transnational Organization Crime, UNODC is mandated to improve the protection and assistance afforded to survivors of human trafficking. The Protocol is the first legally binding international instrument to define trafficking in persons. UNODC assists countries in implementing effective responses to human trafficking, not only by ensuring that structures are in place to facilitate the prosecution and conviction of traffickers but also by addressing the needs of survivors.