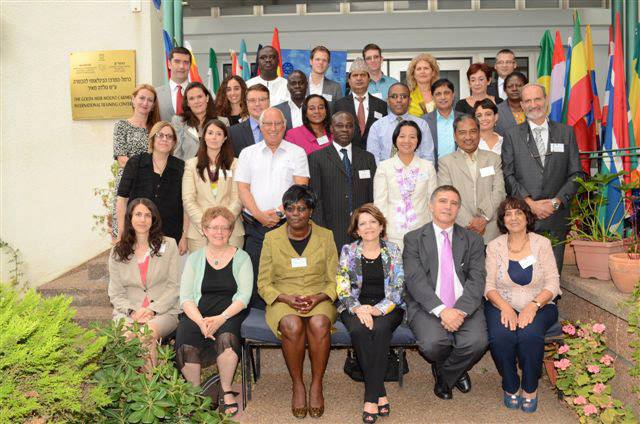 Keynote speaker Dr. Maria Grazia Giammarinaro, OSCE Special Representative and Co-ordinator for Combating Trafficking in Human Beings, said the crime of human trafficking is rarely recognized and when it is - this usually pertains only to situations in which extreme violence has been used. Very often, while victims are coerced by taking advantage of their personal vulnerability, including by threatening to report their immigration status which would result in deportation, traffickers still go unpunished.

"When an emerging crime threatens the whole society, the jurisprudence should avoid a conservative approach," Dr. Giammarinaro said. "It is time to be innovative in the interpretation of new legal provisions and apply severe penalties allowing confiscation of the proceeds of crime."

The seminar included lectures, panels, a case study and study visits such as to the Israeli Shelters for Victims of Trafficking, the Ministry of Foreign Affairs, the Knesset and the Israeli Supreme Court. A video conference was held with an international expert on victim trauma, Professor Judith Lewis Herman from Harvard University Medical School.

In her intervention during the panel on evidential challenges, UNODC senior expert Advocate Rahel Gershuni illustrated pieces of evidence which were important in convictions along with evidential weaknesses which did not necessarily produce exonerations.

She stressed that "Despite law enforcement's best efforts, in many cases the central piece of evidence is the victim's testimony." She added that " This presents special challenges in view of typical behavior of victims, which, on the face of it, may not seem credible, and which may include delayed complaints, returning to an abusive employer, not fleeing when this is possible and telling their stories bit by bit like the peeling of an onion".

The seminar was attended by 21 judges from across the globe, including judges from Ethiopia, Ghana, Kenya, Senegal, Moldova, Montenegro, Serbia, Nepal, the Philippines and Israel. High-level Israeli officials, including Dr. Merav Shmueli, National Anti-Trafficking Co-ordinator and Daniel Carmon, the head of MASHAV, also took part in the seminar.

In the closing discussion, many judges deemed the workshop "eye opening" having changed their perception, most evidently with regard to victims' rights. Some also mentioned concrete steps they could undertake, and for example to rule on residence permits for foreign victims of trafficking and to order that compensation be awarded to victims. Some judges also undertook to pass on the knowledge within their judiciaries.