Global report on trafficking in persons 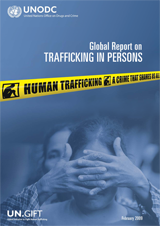 Trafficking in persons is a truly global phenomenon: victims from at least 127 countries have been reported, and victims have been reported in 137 countries. Given this diffusion, it is difficult to estimate the size of the problem. Many countries have only recently passed, and some have yet to pass, legislation making human trafficking a distinct crime. Definitions of the offence vary, as does the capacity to detect victims. According to official figures, at least 22,000 victims were detected globally in 2006, but some countries where human trafficking is known to be a problem do not report detecting victims.

Global Report on Trafficking in Persons 2009