Mexico, Central America and the Caribbean

Many of these countries are transit countries for cocaine bound for the main consumer markets in North America and Europe. For the North American market, cocaine is typically transported from Colombia to Mexico or Central America by sea and then onwards by land to the United States and Canada. The US authorities estimate that close to 90% of the cocaine entering the country crosses the US/Mexico land border, most of it entering the state of Texas. According to US estimates, some 70% of the cocaine leaves Colombia via the Pacific.

Colombia remains the main source of the cocaine found in Europe, but direct shipments from Peru and the Plurinational State of Bolivia are far more common than in the US market. The relative importance of Colombia seems to be in decline. For example, in 2002, the UK authorities reported that 90% of the cocaine seized originated in Colombia, but by 2008, the figure fell to 65%. In a number of other European countries, Peru and the Plurinational State of Bolivia seem to be the primary source countries of cocaine. 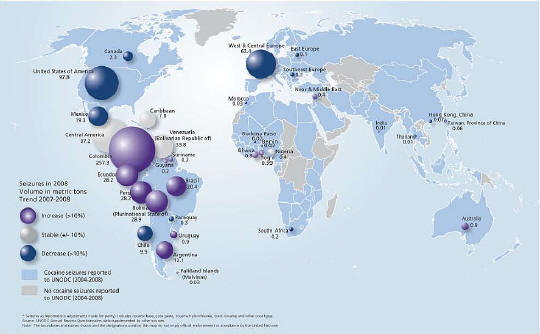 The Regional Programme for Central America is the result of an in-depth consultation process fully supported by Member States of the region. UNODC organized a Regional Experts Meeting in Costa Rica in 2009 on priorities for action in Central America for the period 2009-2011.

The ''Programa de UNODC para el reforzamiento del plan de acción de la estrategia de seguridad en Centroamérica y México'' was adopted at the Ministerial Conference in Managua , Nicaragua on 23-24 Junes 2009 by the seven Member States of the Central American Integration System (SICA), with Costa Rica as observer, the Dominican Republic as an Associated State to SICA and Mexico. It is intended to complement the Central America and Mexico Security Strategy Action Plan.

Representatives of the States at the Ministerial Conference also presented their national priorities and requested UNODC to provide state-of-the-art advisory services and technical assistance in order to design and implement an appropriate answer to the problems of drug trafficking and related transnational organized crime.

In the final declaration of the Managua Ministerial Meeting, Member States also endorsed the creation of Centres of Excellence in the region, which will gather the existing expertise in Central America and leverage it to deliver highly successful programmes and projects.

Establishment of a treatment, rehabilitation and social reintegration network in Central America

The regional project aims to create a treatment, rehabilitation and social reinsertion network in Central America, in order to progressively promote an integrated approach to the needs of  drug dependent persons and facilitate the consolidation of a regional treatment capacity.

Most of the countries in Central America have recently established special anti-narcotic and/or organized crime units (OC units) within the police and the prosecuting authorities. This initiative proposes the creation of a sustainable Network of Central American Anti-Organized Crime and Drug Prosecution Units (OCN) in order to strengthen the prosecuting and investigating capacities of Central American countries in handling complex and transnational cases involving drug trafficking as well as other forms of organized crime, and to enhance regional and inter-regional operational and judicial cooperation. The OCN is  composed of all prosecuting officials who work in specialized organized crime and narcotic units of the participating countries.

Regional Centre of Excellence on Maritime Security in Panama

The objective of centres of excellence is to assist governments in the region to build up national and regional capacity in dealing with threats and risks stemming from illicit trafficking, drug abuse, organized crime and related violence as well as to strengthen the rule of law. Centres of excellence will also support governments in developing effective programmes by identifying areas of opportunity and areas needing immediate attention by sharing information, providing research and analysis.

The Centre of Excellence in Panama City will help diagnose threats in maritime security and serve as a resource of expertise, training, data collection and analysis. It will provide strategic direction and training in search techniques, security, maritime interdiction, human trafficking and the handling of hazardous and toxic cargo.

UNODC and the National Institute of Statistics of Mexico (INEGI) have established a regional Centre of Excellence on Government, Public Security, Victimization and Justice statistics in Mexico. The objective is to facilitate the strengthening of statistics and analytical capacities in the above mentioned areas. The Centre of Excellence will develop and provide planning and information gathering tools, develop studies and publications, offer training and, develop databases and methodologies. The centre will also promote the exchange of standardized information between countries and the identification of good practices in the field of crime statistics.