Between 2004 and 2007, at least two distinct trans-shipment hubs emerged in West Africa: one centred on Guinea-Bissau and Guinea, and one centred in the Bight of Benin which spans from Ghana to Nigeria. Colombian traffickers transported cocaine by 'mother ship' to the West African coast before offloading to smaller vessels. Some of this cocaine proceeded onward by sea to Spain and Portugal, but some was left as payment to West Africans for their assistance. The West Africans then trafficked this cocaine on their own behalf, largely by commercial air couriers. Shipments were also sent in modified small aircraft from the Bolivarian Republic of Venezuela to various West African destinations. 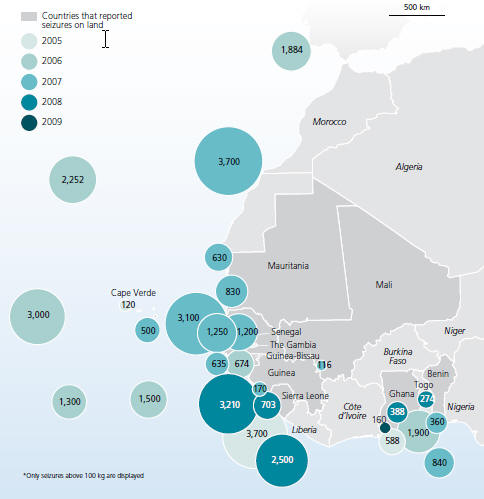 Additionally, West and Central Africa accounts for a large share of global seizures of non-specified amphetamines. The region remains a priority area in terms of responding to the drug problem, starting with a better understanding of the nature of drugs in the illicit market.

In October 2008, the Economic Community of West African States (ECOWAS), supported by UNODC and the United Nations Office for West Africa (UNOWA), and in partnership with the European Union, held a Ministerial Conference in Praia, Cape Verde, to address the serious security threat posed by drug trafficking in the region. The Political Declaration and Regional Action Plan that resulted from this conference were subsequently endorsed by the Heads of State and Government of ECOWAS in Abuja on 19 December 2008.

The Praia Declarations reflect a strong political commitment and establish the basis for a detailed cooperation framework to combat drug trafficking and organized crime in West Africa. UNODC was entrusted with leading the process of translating the Political Declaration and Regional Action Plan into concrete programmes to be carried out by ECOWAS Member States in partnership with UNOWA, the Department of Peacekeeping Operations (DPKO), the International Criminal Police Organization (INTERPOL), and the European Union. An ECOWAS Operational Plan and a Monitoring and Evaluation Mechanism were formulated, specifying the operational role of the ECOWAS Commission in supporting Member States in the implementation of the Regional Action Plan.

UNODC's response to the call for support from ECOWAS was to design a crosscutting, comprehensive strategy based on the principle of shared responsibility. Efforts towards peace-building, security sector reform, national institution building and capacity-building and the shared responsibility shall be implemented in the most effective manner and are expected to contribute to the creation of a fertile environment for socioeconomic development to the benefit of the people in West Africa. Based on this strategic approach, UNODC's Regional Programme for West Africa 2010-2014 [insert link to regional programme - pdf Document], launched in December 2010 in New York, was designed with the overall objective to support the efforts of West African States, regional organizations and the civil society to respond to evolving security threats and to promote the rule of law and good governance.

UNODC supports the ECOWAS Commission in its capacity as a regional leader to help secure regional ownership and long term sustained reforms. Other key partners are the national authorities in charge of the thematic areas covered by UNODC's mandate, as Member States are primarily responsible and accountable for achieving the objectives foreseen in the Regional Programme for West Africa. Therefore, UNODC seeks their full involvement, ownership and commitment to the objectives of all initiatives planned or ongoing.

While  Regional Programmes are designed to promote partner countries' ownership by aligning national policies and priorities, UNODC has also developed Country Programmes, which are in line with the Regional Programme but reflect each country's particularities and needs, based on UNODC's knowledge and experience in the region. Country Programmes are governmental development frameworks, elaborated through an inclusive and participative approach, which aim at placing the fight against drugs and organized crime within the context of overall national development strategies. The ECOWAS Regional Action Plan requests all ECOWAS Member States to develop a Country Programme. While some Country Programmes, such as the NIP for Cape Verde, Guinea-Bissau, Mali, Nigeria, Ghana and Togo, are already ongoing, others are still in the pipeline or planned.

UNODC uses its comparative advantage to ensure a cross‐border and integrated approach in the fight against illicit drug trafficking and organized crime, including the global threat posed by the transatlantic trafficking route. Recognizing the difficulty of managing vast African blue and green borders, UNODC has set the objective to promote proactive policing by developing an intelligence-based approach to law enforcement and to improve inter-agency coordination with a view to disrupt the activities of organized crime groups behind drug trafficking. The following initiatives and projects provide good examples for UNODC's integrated, comprehensive approach in countering illicit drug trafficking:

West Africa Coast Initiative (WACI): In a comprehensive multi-stakeholder approach to support the implementation of the ECOWAS Regional Action Plan, UNODC, UNOWA, the Department of Political Affairs (DPA), DPKO and INTERPOL have agreed to work together to address the growing problem of drug trafficking, organized crime and drug abuse in West Africa. WACI is a joint technical assistance framework aimed at regional and national capacity-building, primarily in post-conflict countries (Côte d'Ivoire, Guinea-Bissau, Liberia, and Sierra Leone; with the aim to include all 15 countries of ECOWAS and Mauritania). Its main components relate to law enforcement, forensics, border management, money-laundering and criminal justice, and they all share the overall objective to contribute to security sector reform in those countries. The West Africa Coast Initiative is a major component of UNODC's Regional Programme for West Africa, supporting the ECOWAS Declaration and Regional Action Plan, through the provision of technical assistance at the national and regional level.

Transatlantic Cooperation: Tackling the Transatlantic Trafficking Route: In the context of transatlantic assistance and the concept of shared responsibility among origin, transit and destination, UNODC has been implementing programmes aiming at forging dialogue and cooperation among the three continents, namely Latin America, West Africa and Europe.  UNODC was able through a project on Law Enforcement and Intelligence Cooperation against Cocaine Trafficking from Latin America to West Africa  to foster trans-regional intelligence coordination and information sharing amongst several countries in West Africa, Latin America and the Caribbean, supported by the European Commission. Through the project, bilateral agreements were signed to facilitate joint investigations and rapid exchange of operational information between law enforcement agencies to promote intelligence‐led investigations for intercepting drugs in participating countries.

Another initiative is the AIRCOP programme, supported also by the European Commission and being implemented jointly with INTERPOL and World Customs Organization (WCO), aimed at strengthening cooperation and intelligence exchange among airports in the three continents. Finally, through the implementation of the Global  Container Programme, important seizures have been reported in recent years, including big cocaine seizures.

Within the framework of South-South cooperation, UNODC in partnership with Brazil, is supporting Guinea Bissau in different initiatives under the framework of the implementation of the National Operational Plan to combat drugs and crime.  Guinea Bissau has been suffering from its territory being used by drug smugglers and posing a major impact on its security and stability.  One of the important projects being implemented with the support of Brazil is the establishment of a Training Center for Security Forces, aiming at law enforcement capacity building. The immediate objective is to serve the national needs and improve security forces capacities to counter narcotics and organized crime with a long term aim for the Training Center to become a Regional Training Academy for Portuguese speaking countries in Africa.