From 12 to 14 November 2019, during a 3-days workshop, the Central African Republic's Legislative Drafting Committee finalised and adopted the last modifications of the pre-draft law on conventional weapons, their parts and components and ammunition presented by UNODC.

The Legal Drafting Committee, which was established with the support of the UNODC Global Firearms Programme and the National Commission on Small Arms and Light Weapons (COMNAT SALW), is composed of firearms and legal experts from different institutions and ministries, including the COMNAT SALW, the Ministry of Interior, the Ministry of Justice, the Ministry of Defense and the Ministry of Foreign Affairs, and is tasked to support the drafting of a comprehensive legal regime on conventional weapons, their parts and components and ammunition. 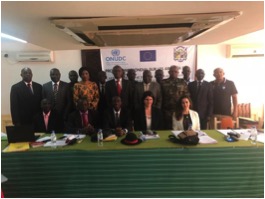 Following an earlier workshop held by UNODC on the topic in June 2019, the activity, which was organized by the Global Firearms Programme in collaboration with the NATCOM SALW, aimed at advancing the draft law on conventional weapons with a view to validating it during the workshop.

The draft law is the result of a comprehensive legislative assistance support provided by UNODC on the topic of firearms and builds upon a comprehensive legislative analysis that highlighted legal loopholes in the existing texts and revealed the need to align the national legislation to the international legal regime and to the Central African Republic's regional and international commitments in this field.

During the workshop, the participants discussed the legal regime as suggested in the draft law, examined each individual provision of the draft law and identified those points that would need to be further amended or harmonized with existing laws or local practices. While doing so, particular attention was paid for the draft law to comply with international and regional legal instruments on firearms and other conventional weapons to which the Central African Republic is party, including the Firearms Protocol, the Arms Trade Treaty, and the Kinshasa Convention on SALW as well as other instruments, such as those relating to trade regulations.

The activity was carried out in the framework of the EU-funded project " Countering transnational illicit arms trafficking through the implementation of the United Nations Convention Against Transnational Organized Crime and its Firearms Protocol".