On 22 May 2019, UNODC's Global Firearms Programme, in cooperation with the UNODC Research and Trend Analysis Branch, and with the support of the EU Delegation to the International Organizations in Vienna, organised a side event to the 28 th session of the Commission on Crime Prevention and Criminal Justice entitled "Shedding Light on Illicit Firearms Trafficking: Supporting Evidence-based Approaches". The event provided a platform to provide an update on the implementation of the ongoing EU-UNODC project on firearms data collection, analysis and operational use and to highlight the importance of systematically engaging in these activities.

Among the main achievements of the project is the set up of a regular global data collection mechanism on firearms via the Illicit Arms Flows Questionnaire, the development and roll out of technical assistance tools to help recording firearms-related information in the course of criminal investigations, as well as an initiative that promotes, among other aspects, good practices in firearms data collection, analysis and operational use, referred to as "Firearms Champion Country Initiative". 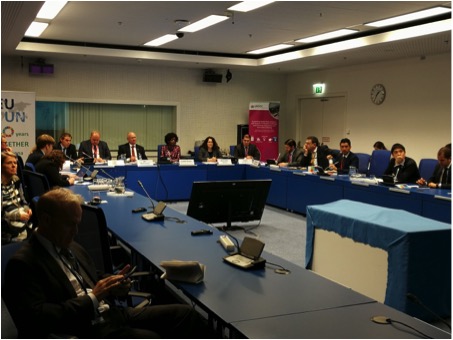 Opening the event, Ms. Loide Aryee, Chief of the Organised Crime and Illicit Trafficking Branch, called to the fact that despite the importance of 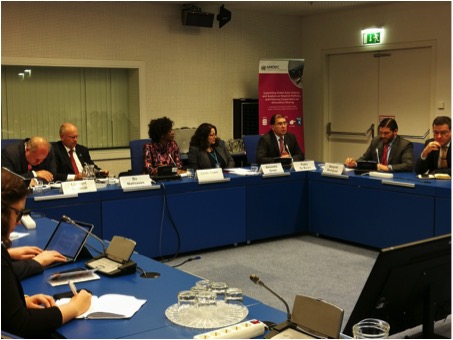 regular and systematic firearms data collection, analysis and operational use, many countries still lack the appropriate protocols, tools and capacities. Mr. Bo Mathiasen, Deputy Director of the Division for Policy Analysis and Public Affairs, then provided an overview of the engagement of UNODC as regards data collection and analysis on firearms trafficking, including the 2015 Study on Firearms and the ongoing global data collection and analysis exercise. Also speaking at the opening, Mr. Lambert Schmidt of the EU Delegation to the International Organizations in Vienna gave an account of EU-led efforts in increasing the evidence-base on organised crime. From the outset on, the speakers agreed that Intelligence-led and evidence-based decisions are crucial when it comes to effective measures to address firearms trafficking and related forms of crime.

As part of the substantive segment, Mr. Antoine Vella of the Research and Trend Analysis Branch provided an overview of the preliminary responses received from countries via the Illicit Arms Flows Questionnaire. Noting that all 71 countries that provided quantitative data up until that point were able to provide figures on firearms seizures, Mr. Vella stressed that while this type of data is an important starting point, law enforcement efforts must go beyond seizures in order to identify illicit firearms flows.

Following this intervention, Ms. Simonetta Grassi, Head of the Global Firearms Programme, emphasized the importance of the initiative both at global and national levels, highlighting that the developed methodology can help countries to review their own firearms data collection processes, tools and capacities, identify existing gaps and challenges, and work with partners to overcome the challenges. Ms. Grassi further explained how the initiative links to SDG target 16.4 and the overall integrated approach of the Global Firearms Programme, and introduced the "Firearms Champion Country Initiative", as part of which Portugal is preparing a national report on the origin of illegal firearms in Portugal. She concluded her intervention by noting that the transformation of national investigative and data collection practices can be time-consuming and that it would be crucial to provide countries with the required support beyond the current project implementation period. 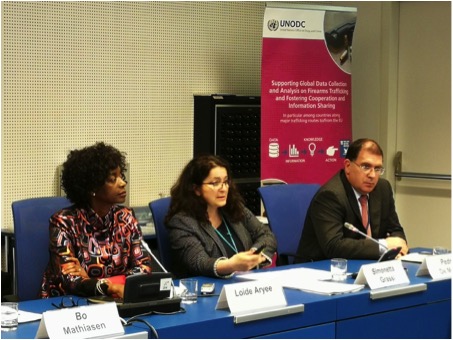 Last but not least, Mr. Pedro de Mouro, Director of the Department for Arms and Explosives of the Portuguese Public Security Police and Mr. Ezequiel Rodrigues, Head of Unit of the Higher Institute of Police Sciences and Homeland Security of the Portuguese Public Security Police, spoke about their efforts in drafting a national report on the origin of illegal firearms in Portugal. The experts highlighted that the initiative allowed to bring together different national authorities involved in the fight against firearms criminality such as the Public Security Police and the Judicial Police. The experts then presented some preliminary data that will be used for the report, such as the number and types of firearms and rounds of ammunition seized, the number of cases of illegal detention and illicit trafficking in firearms investigated, and the number and types of crimes related to the seizures, inter alia.

Please follow the below links for more information on the event:

Brochure on the Global Firearms Programme's approach on SDG target 16.4