UNODC participates in the destruction of 25,000 firearms in Argentina

On 12 August 2016, the National Agency for Controlled Materials (Anmac - former RENAR) acting under the authority of the Ministry of Justice and Human Rights, carried out the destruction of 25,000 firearms from crime. The material was stored in court deposits in the provinces of Buenos Aires, Santa Fe and Mendoza.

The event, which occurred in the Tenasis steel plant in the city of Campana, province of Buenos Aires, was supervised by the Minister of Justice and Human Rights, Germán Garavano, and the head of Anmac, Natalia Gambaro, accompanied by the Minister of Security, Patricia Bullirch, the Regional Prosecutor of Rosario, Jorge Baclini, the UNODC Coordinator of the Global Firearms Program for Latin America and the Caribbean, Lucía Gómez Cónsoli; the civil society and authorities from the various security forces in the country. Firearms were destroyed by the method of crushing and smelting, recognized as one of the most effective and less polluting methods which guarantees the total destruction of firearms, preventing the reuse of its parts and components.
This preventive measure by Anmac - to quickly store and to destroy firearms seized and confiscated located in different judicial deposits in the country, in order to avoid diversion to the illegal market - is one of the many actions being taken by the agency to combat and eradicate the illicit trafficking in firearms, their parts and components.

This event is also part of the capacity building work conducted by UNODC's Global Firearms Programme (GFP): the GFP supports Member States in establishing comprehensive regimes to prevent and combat illicit manufacturing and trafficking in firearms, including the collection, save storage and disposal of seized and collected weapons, in line with international legal instruments and standards. 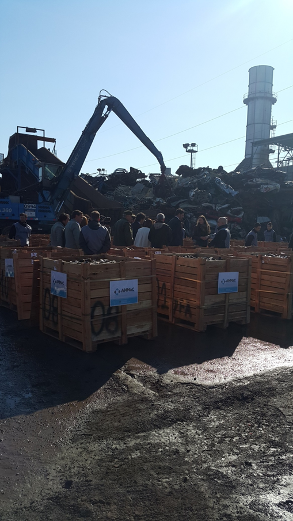