In conversation with Mohamed Rashid, a recovering drug user 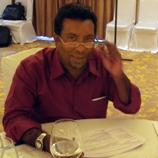 3 July 2009 - The Regional UNODC Office for South Asia recently interviewed Mohamed Rashid, a recovering drug user from Maldives. Rashid gives an account of his journey with drugs, how he found help and what he is doing now to assist people with drug addiction.

UNODC: When did you start taking drugs and why?

Mohamed Rashid: I was an obsessive drug addict for 19 years, and it was like being trapped in a cell with no light or oxygen. I live in Malé, one of the islands of Maldives, which tourists often refer to as "the Paradise". It is a small place, and I was popularly known as Rado, the drug addict. I was introduced to drugs by my friends when I was 16 years old, and I was curious to know what this "high" or "trip" they talked about was. With few employment opportunities in the city, I found myself idling in the streets. I started smoking marijuana in 1985, graduating to hashish oil in 1997. I would mix the hashish oil with tobacco and smoke it.

As my body became more resistant to the drugs, I craved a higher feeling of euphoria. I was then introduced to heroin. Those were my worst days. I would inhale one bullet, which is five grams of heroin, for every 24 hours. I would place the heroin, sometimes called brown sugar, on a Wrigley's chewing gum wrapping foil and move a burning lighter under it to inhale the smoke. This was called "chasing the dragon". I would peddle 30 bullets, pay the dealer and save six bullets for myself. Unfortunately, I was unaware of its deadly consequences. Had I been more aware of it, had my teachers educated me about it or had my family warned me about the use of drugs as I was growing up, I would have had the choice of saying no to drugs and my life would be so different.

UNODC: How did drugs affect your life and relationships?

Mohamed Rashid: I harassed my wife for money. I stole from family members. I emotionally blackmailed my wife and spent all her salary buying drugs. I sold everything in my house. Once I was so desperate for money, I remember picking up a rice cooker in which rice was being cooked, threw out the rice and ran away with it. I forgot that I was a son, a husband and a father. I neglected my children when they needed my love, care and support. I used to lie "stoned" on the pavements. I almost lost my family, my children and my respect. Still, my wife looked after me, and my children treated me like their father. I survived only because they did not lose hope in me.

UNODC: When did you decide to start recovery?

Mohamed Rashid: When my mother told me to stay locked in my room while my brother's future in-laws came to visit our family, I painfully realized that my family was ashamed of me. Because of me, they too could be discriminated against. I was a curse and shame for them. That is when I decided to change my life. Desperate, with no money and no information, I began scouting around for centres that helped people like me. I travelled to some of the islands of Maldives but found nothing appropriate or even decent. So, I tried the "cold turkey detoxification" method on my own. The withdrawal process is painful when you suddenly stop taking heroin. Chills would pass though my body, and the hair on my body would stand on end. That is why it is called "cold turkey". I would take cold showers and bathe in the sea since cold water numbs the pain for a short while. This did not last, but it was at least a beginning. I relapsed shortly afterwards, trying to treat myself on my own.

UNODC: Were you ever arrested? If so, how were you treated in prison?

Mohamed Rashid: I was arrested three times. The first time I was sentenced to six years and kept in custody for three months pending investigation. The police officials branded us as criminals. They did not want to hear our side, and we had no legal representation. No human rights organization was that active at that time. We had no choice but to succumb. I was then asked to be admitted to the centre of the Drug Rehabilitation Services. There was a waiting list, and I would have had to be on the queue for 18 months. While on queue, I was arrested a second time for drug use, and this time I was sentenced to 18 years in prison. After writing several letters to the prison authorities to plead my case, I was admitted to the rehabilitation ward. The National Narcotics Control Bureau (NNCB) monitored me. To be placed back in the community, I had to meet certain standards, like being clean from drugs for five years and have good behaviour with no signs of violence. I was subsequently released and asked to attend the aftercare programmes for recovering drug users in the community.

UNODC: In your experience, how effective is the drug treatment programme in Maldives?

Mohamed Rashid: Since that was the only rehabilitation and treatment programme for drug users in Maldives at the time, the treatment was helpful as an initial kick-start. The establishment of NNCB has further strengthened the efforts of the Government aimed at addressing the issues of drug control. It is responsible for the coordination of demand reduction and awareness-building programmes, maintaining communication with international drug control agencies and management of rehabilitation programmes. What really helped me in their programme was the psychosocial support. It was by attending those meetings that I realized that I could recover, that if I make up my mind not to take drugs, then half the battle is won. Then, any treatment will work for me because I will make an effort to cooperate. I wish the authorities at NNCB would look into the prevention and behavioural aspect of the treatment as well.

UNODC: Can you tell us about your organization Journey and its work in reducing drug use in Maldives?

We would typically seek out drug users and recovering drug users who were to be returned to the community after having completed the treatment programme supported by the Government. We provided peer counselling and psychosocial support. We monitored their behaviour and ensured there were no relapses. We also looked into the aftercare process and conducted awareness programmes on the harmful effects of drugs and how they can be avoided, for both the drug users and their families, especially their children. Above all, we did not discriminate against them or make them feel like outcasts and criminals. We treated them with love and understanding because we knew what they were going through.

UNODC: Through your work with civil society, you have become familiar with narcotics-related legislation. Could you describe the steps that Maldives has taken to address the drug problem?

Mohamed Rashid: Official recognition of the drug problem came in 1977 when a person was arrested with 350 grams of hashish. As a result, the first principal legislative act, the Law on Narcotic Drugs and Psychotropic Substances, was passed in 1977 to help the legal system deal with drug abuse. I believe that the law needed to be more comprehensive since it did not distinguish between users and suppliers. It would pass the same sentence, life imprisonment, which is close to 25 years, for both dealers and users.

The law was later amended, making a distinction between users and suppliers. While drug suppliers are sentenced to harsher punishments, drug users are generally given opportunities to reform at the department of Drug Rehabilitation Services. Maldives has ratified all three United Nations conventions relating to drugs, namely, the Single Convention on Narcotics Drugs of 1961, the Convention on Psychotropic Substances of 1971 and the United Nations Convention against Illicit Traffic in Narcotics Drugs and Psychotropic Substances of 1988.

Mohamed has been in recovery for the last seven years and remains drug free to date. He has worked as a senior police officer in the National Security Services of Maldives and was the vice-president of Journey, an organization run by recovering drug users for drug users in Maldives. Currently, he works with the Government of Maldives on drug rehabilitation and recovery at the department of Drug Rehabilitation Services of the Ministry of Health and Family.

UNODC continues to support Maldives in the design and implementation of its first Drug Control Master Plan, which was approved in March 2008. Under the plan, the Government implements a comprehensive package of services for injecting drug users and their sex partners, with the support of UNODC and local non-governmental organizations.

The work of UNODC in Maldives is made possible through the contribution of the Australian Agency for International Development (AusAid).