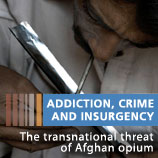 21 October 2009  - Afghanistan has a monopoly on global opium poppy cultivation (92 per cent), the raw material for the world's deadliest drug - heroin. The size and impact of the opium economy in Afghanistan were documented in the Afghanistan Opium Survey 2009 published in September. Less well known, however, is the size of the opiate trade once it leaves Afghanistan, and its impact on the world.

In a new report, Addiction, Crime and Insurgency: The Transnational Threat of Afghan Opium, UNODC shows the devastating consequences that the 900 tons of opium and 375 tons of heroin that are trafficked from Afghanistan every year have on the health and security of countries along the Balkan and Eurasian drug routes, of countries in Europe, of China, India and the Russian Federation.

It documents how the world's deadliest drug has created a market worth $65 billion, catering to 15 million addicts, causing up to 100,000 deaths per year, spreading HIV at an unprecedented rate and, not least, funding criminal groups, insurgents and terrorists.

"We have identified the global consequences of the Afghan opium trade. Some are devastating, but expected; others seem surprising, yet they are very real. I urge the friends of Afghanistan to recognize that, to a large extent, these uncomfortable truths may be the result of their benign neglect", said UNODC Executive Director Antonio Maria Costa at the unveiling of the new report.

The report's findings reveal a number of anomalies. One such anomaly is the incongruence between the large quantities of heroin being consumed and the small quantities being seized. Approximately 40 per cent of Afghanistan's heroin is trafficked each year into Pakistan, about 30 per cent enters the Islamic Republic of Iran and 25 per cent flows into Central Asia.  In Afghanistan, corruption, lawlessness and uncontrolled borders result in an insignificant 2 per cent interception rate of the opiates produced, compared to 36 per cent in Colombia for cocaine.

According to Mr. Costa, "the Afghanistan/Pakistan border region has turned into the world's largest free trade zone in anything and everything that is illicit - drugs of course, but also weapons, bomb-making equipment, chemical precursors, drug money, even people and migrants."

The second anomaly exposed by the report is that outside Afghanistan, interdiction rates decline as the drugs move closer to lucrative and more opulent markets. While the Islamic Republic of Iran intercepts 20 per cent of the opiates crossing its territory and Pakistan 17 per cent, Central Asian States intercept just 5 per cent and the Russian Federation a meagre 4 per cent. Countries of South-Eastern Europe, including European Union member States like Bulgaria, Greece and Romania, intercept less than 2 per cent of their opiate trade.

"Seizing Afghan opium where it is produced is infinitely more efficient and cheaper than trying to do so where it is consumed", said Mr. Costa, calling for more resources to tackle the problem at its source - in Afghanistan and its surrounding area. "This is not just a shared responsibility: it's hard-headed self-interest", said Mr. Costa.

A third anomaly is the significant increase in the drug money made by the Taliban today compared to the amount it was making in the 1990s, when it was in power. In Addiction, Crime and Insurgency, UNODC documents that a decade ago the Taliban earned $75-100 million per year by taxing opium poppy cultivation. Since 2005, the Taliban and other insurgents in Afghanistan have derived $90-160 million per year just from taxing opium production and trade (a tithe known as ushr).

"Newly born narco-cartels in and around Afghanistan are blurring the difference between greed and ideology. Some profiteers in the heroin trade wear suits and white collars, other wear black turbans", said the head of UNODC. "Many of these drug barons, with links to insurgency, are known to Afghan and foreign intelligence services. Why have their names not been submitted to the Security Council, as required by resolutions 1735 and 1822, in order to ban their travel and seize their assets?"

The double nature of the Afghan drug flows is sometimes forgotten. There are the physical quantities (tons of opium and heroin), that cause havoc to health in consuming nations: law enforcement concentrates on these flows. Then there are the value flows, the money made by criminals and  insurgents involved in the illicit drug trade. "The perfect storm of drugs and terrorism that has struck the Afghan/Pakistan border for years, may be heading towards Central Asia. A big part of the region could be engulfed in large-scale terrorism, endangering its massive energy resources", warns the head of UNODC.

More deaths from drugs at home  than on the battlefield

Surprising as it may seem, the human cost of addiction in consuming countries is higher  than the number of soldiers killed in Afghanistan's opium poppy fields. For example, in NATO countries, the number of people who die of heroin overdoses every year (more than 10,000) is five times higher than the total number of NATO troops that have been killed in Afghanistan in the past eight years.

An anomalous but widely known fact is that, since 2006, much more opium has been produced in Afghanistan than is consumed worldwide. The report confirms that there is now an unaccounted stockpile of 12,000 tons of Afghan opium - enough to satisfy more than two years of world heroin demand. "With so much opium in evil hands, the need to locate and destroy these stocks is more urgent than ever", said Mr. Costa.

A final anomaly concerns the illicit drug trade and consumption: the numbers just do not add up. For instance India, despite having 800,000 addicts, does not report any inflow of raw opium: either vast quantities of domestic (licensed) production are diverted, opium poppy is being cultivated illicitly in India, or some of the Afghan opium is reaching the subcontinent.

Governments need to address all links in the chain

Addiction, Crime and Insurgency offers a perspective that is both deeper in scope and broader in geographical coverage than earlier UNODC work on Afghanistan. "The numbers are scary", said Mr. Costa, "Even more frightening is the fact that Governments  have not recognized that they can only tackle this threat by addressing all links in the chain: assistance to farmers to reduce supply, drug prevention and treatment to curb demand, and law enforcement against intermediaries."