Drugs and HIV: voices of hope in India

Cristina Albertin, UNODC Representative for South Asia, recently visited the north-east of India, where she met determined men and women dealing with drug use, HIV and AIDS. 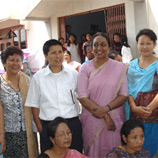 25 September 2009 - Assam, Meghalaya, Nagaland, Manipur and Mizoram are the spellbinding names of five of the eight states in the north-east of India, squeezed between Bangladesh, Bhutan, China, Myanmar and Nepal. These states showcase the natural beauty of India's far-flung east. World-known Assam tea is produced here, bringing to mind images of lush green hills and paddy fields, where in a peaceful scenery women pick tea leaves and families cultivate rice.

But there are other, little known realities. Some 100,000 people live with HIV and AIDS in north-east India.

In early September, a team of Delhi-based United Nations staff travelled to these parts, where the United Nations has teamed up with the National AIDS Control Organisation to carry out an HIV and AIDS prevention and care programme. Adult HIV and AIDS prevalence rates in Manipur and Nagaland are 1.57 and 1.2 per cent respectively and well above the national average of 0.34 per cent,  according to the Department of AIDS Control, Ministry of Health and Family Welfare of the Government of India.

Among the high-risk groups, the numbers are alarming: in Manipur, 19.8 per cent of injecting drug users are HIV positive, as are 10.4 per cent of men having sex with men. In Nagaland, 16.4 per cent of female sex workers are living with HIV and AIDS. All of these numbers are well above the national average. Although national HIV prevalence has been decreasing since 2002, this has not translated into a similar decrease in the north-east. Whereas interventions for injecting drug users have had an impact, prevalence rates remain well above the national average of 6.9 per cent, meaning that much more needs to be done.

People opened their hearts and spoke of how they got into drugs and of how they were dealing with it. A former heroin user was still wondering how a friend got him hooked to heroin after only three days. At the time of the visit, he was a client of the first oral substitution treatment centre run by the Voluntary Health Association of Meghalaya. The Association has attended to some 150 clients since 2006, to whom it provides buprenorphine, a semi-synthetic opiate, to treat heroin addiction.

Although many of the clients talked openly about repeated relapses and the frustration that came with them, they were convinced that only treatment with buprenorphine helped them to lead a normal, productive life that included employment, trustful family relations and a life safe from HIV and hepatitis. They were relieved that they no longer had to worry about how to get drugs. Ultimately, however, they also wanted to free themselves of buprenorphine, an aim that according to the Association's doctor providing medical and psychosocial assistance to the recovering drug users, was feasible.

Women drug users, whose voices are seldom heard because drug use is globally perceived as a man's issue, also shared their stories. One woman spoke of how she turned to heroin and pharmaceuticals to deal with the loss of her parents. She said it was difficult for her and other women in similar circumstances to speak about their addiction or seek help. The medical doctor at Meghalaya Manbha Foundation who attends to the women said that women tend to feel more at ease in family health centres than in drop-in centres.

The voices of these men and women in the north-east of India need to be heard by policymakers in the capital, by staff of joint United Nations programmes and by other cooperating agencies. Only by keeping these stories in mind will service providers be able to design and implement large-scale programmes for those who are vulnerable to and need treatment for drug use and HIV.