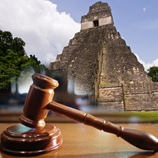 29 April 2010 - UNODC has signed a memorandum of understanding with the International Commission against Impunity in Guatemala (CICIG) to strengthen its work to improve justice and security in that country. UNODC spoke with Commissioner Carlos Castresana of CICIG on the situation in Guatemala and the threats posed by organized crime and impunity. The Commissioner highlighted the important role that UNODC is called on to play in addressing those threats.

UNODC: What is the role of CICIG in Guatemala?

Commissioner Castresana: The Commission was created in 2007 with a specific mandate: to dismantle illegal bodies and clandestine paramilitary security groups that were created during the country's long armed conflict and that have infiltrated almost all State institutions since the peace accord of 1996. They have evolved from counter-insurgency groups to organized criminal groups. With 97-98 per cent of serious crimes remaining unpunished, our role is to help the Government of Guatemala to dismantle these groups and to strengthen the national justice system.

Commissioner Castresana: If CICIG was to be extended, it seems to me that we would be more efficient if our mandate could be broadened not only to dismantle these groups but also to address corruption and, more importantly, organized crime. There is an emergency situation in Guatemala from a justice and security point of view, as the country has weak and ineffective institutions as a result of the armed conflict, and the problem has been greatly aggravated in recent years because of transnational organized crime. Therefore I believe the answer has to be broader, with a broader effort from the entire international community. Since the problem transcends borders, the answer must also be broader.

Commissioner Castresana: It is difficult to estimate precisely the extent of drug trafficking in Guatemala, but a strong presence of traffickers has been reported. We hear of 800 clandestine runways where drugs from South America arrive to be transported on to North America.

There are entire zones with weak security - whether the army or the national police or authorities in general. The situation is serious and deserves urgent attention. It is important to understand that Guatemala, as well as Honduras, El Salvador and indeed most countries in the region, have institutions that need assistance as the challenge is formidable and the response must be very strong and energetic. They are not in a position to respond alone, and in our experience, I must add, these countries are very willing to receive multilateral support since the United Nations does not have a political agenda.

UNODC: Guatemala has one of the highest homicide rates in the world, and almost 80 per cent of those homicides are committed with firearms. There are an estimated 1.6 million weapons in circulation in the country, more than one gun for every 10 inhabitants. What, in your opinion, can be done to effectively 'disarm' the country and to reduce violent crime?

Commissioner Castresana: According to official statistics from the Ministry of Defence, there are 300,000 illegal firearms circulating in Guatemala. We succeeded in having Congress pass a firearm law in 2009, which was a condition of the peace accord. The problem now is to implement this law, a process that requires political will and resources.

Apart from addressing the issue of poverty - and at times extreme poverty - the solution is to indeed disarm Guatemala and recover these firearms. The possession of firearms is a constitutional right in Guatemala, and we are not saying that this right should be taken away if this is part of the culture, but these guns must be regulated. The law must be followed so that we know which weapon belongs to whom, ensure that owners have valid licences and are honest citizens with full possession of their mental and physical faculties. 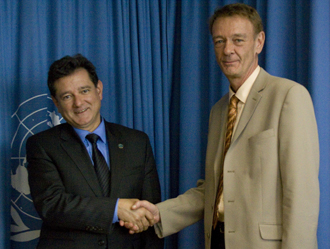 UNODC: UNODC recently launched a national programme in Guatemala to strengthen the rule of law, security and justice. UNODC and CICIG also signed a memorandum of understanding to strengthen cooperation in those areas.  How do you see the contribution of UNODC in addressing these issues in Guatemala and what synergies do you see between the work of the two entities?

Commissioner Castresana: UNODC has a duty to intensify its presence and extend assistance to Member States which are in fact confronting an emergency situation in the face of a threat. If Colombia and Mexico, despite having many more financial resources, are overwhelmed by the threat of organized crime, how can Guatemala, Honduras and El Salvador - which for different reasons have weaker institutions - deal with the problem?

I therefore believe UNODC has an extremely important mission in Guatemala. The mandate of CICIG allows us to do many things, but UNODC is called upon to provide technical assistance to strengthen institutional capacity and legislative reform, if not now, at least in the medium and long term. CICIG is by its nature a short-term mission. I like to see CICIG as an 'ice-breaker', created to pave the way but not exist indefinitely, because the country should at some point take responsibility for itself. But certainly once CICIG finishes, there should be other United Nations entities there to consolidate results. In several areas, I believe UNODC and other United Nations agencies such as the United Nations Children's Fund (UNICEF) and the United Nations Development Fund for Women (UNIFEM) would be called on to fill the void.

UNODC: What challenges do you foresee for the work of UNODC and CICIG in Guatemala?

Commissioner Castresana: The international community has invested a lot of money to stabilize and bring democracy to this region. But the international community should also take a more disciplined approach so that Member States do not support projects in a disjointed manner - we must coordinate all efforts. There is a strong international presence in Guatemala, so, for example, in questions of justice and security we should coordinate and seek the best possible partner to deliver high-quality services, such as UNODC.