Partnership to promote management of HIV in prisons in Africa 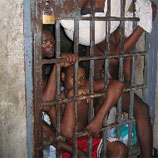 22 July 2010 - With almost two thirds of all people infected with HIV living in sub-Saharan Africa, the African continent remains the region of the world that is most severely affected by HIV and AIDS. Since prisoners are part of the broader community, the health threat of HIV within prisons is inextricably linked with that outside prisons, thus demanding coordinated action.

As HIV and AIDS leaders, practitioners, policymakers and activists meet for the biannual International AIDS Conference this week in Vienna, UNODC is focusing on HIV in prison settings, its related activities underpinned by the belief that good prison health is good public health.

Despite wide recognition that prisons present a high-risk environment for the transmission of HIV, serious gaps remain in the responses of most countries to that problem. Strategies to address HIV in prisons are isolated and not properly addressed by national HIV action plans, despite the fact that imprisonment provides an important opportunity to screen, counsel and treat a high-risk population whose members will eventually return to the community.

Earlier in the week at the AIDS conference, UNODC discussed an initiative called the African HIV in Prisons Partnership Network (AHPPN), which aims to support Governments and organizations in their efforts to mount effective, human rights-based responses to HIV in prisons in Africa.

Formally launched in November 2009 and spearheaded by UNODC, the network supports HIV and AIDS prevention, care and treatment strategies in prison settings in Africa, operating in observance of internationally recognized human rights and medical ethics relating to the provision of health services for prisoners.

The core mandate of the network is to help members to address the broader correctional and prison reform challenges in Africa and to support the work of both correctional services and national AIDS councils across the continent. The network also works to ensure that HIV prevention, care, treatment and support programmes in prisons are developed and implemented on the basis of qualitative data and successful evidence-based practices.

In order to provide principled direction and support to the network and its membership, a Southern and Eastern Africa declaration of commitment for HIV and AIDS prevention, care, treatment and support in prisons has been developed. Adopted by representatives of 27 African countries so far, the declaration takes into account the social, cultural and economic context of Africa and forms the foundation for the network's operations in Africa.

Signatories to the Declaration undertake, among other things, to advocate for reform of the criminal justice system with the aim of improving prison conditions in Africa; support the development of a comprehensive knowledge-based prison health-care system; encourage Governments and international partners to allocate more resources to tuberculosis, HIV and AIDS prevention, treatment, care and support in prisons; and advocate for professional and political leadership and community involvement in achieving an effective response to HIV in prisons.

For more information on the network, including how to get involved, please visit the AHPPN website at www.ahppn.com.

UNODC on HIV and AIDS