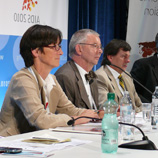 23 July 2010 - UNODC has released a publication entitled "Toolkit for HIV Situation and Needs Assessment in Prisons" at the 2010 International AIDS Conference being held between 18 and 23 July in Vienna, Austria.

The Toolkit, which provides information and guidance on conducting situation and needs assessments for the prevention and treatment of HIV infection and tuberculosis (TB) in prisons, has been compiled to help Governments set more specific targets for achieving the universal access of prisoners  to evidence-based HIV prevention, treatment, care and support interventions.

The Toolkit takes into account that many countries lack mechanisms to address such issues. With more than 30 million men, women and children worldwide spending time in detention each year, the barriers to fair and decent services must be removed. The Toolkit therefore proposes comprehensive HIV care which should be made available to all prisoners in the form of prevention, voluntary counselling and testing, antiretroviral treatment, prevention and treatment of opportunistic infections, as well as support. In many countries prisoners are excluded from AIDS response strategies, including from national HIV surveillance systems. Information on the HIV situation in prisons is often lacking or incomplete.

By using the Toolkit, Governments may set more specific targets tailored to the needs of prisoners and prison staff. It is based on the premise that the incidence of HIV and other infectious diseases is not only higher among prisoners, but also easily spread to the population at large due to prisoners moving to and coming from the community. The Toolkit states that good prisoner health means good public health and that this is essential for effective custodial management and non-discriminatory health care.

The launch of the Toolkit supports the aim of the AIDS 2010 conference calling for "Rights Here, Right Now" since the rights of prisoners are often overlooked by public health authorities.

Some of the core issues and findings to come out of the Toolkit are:

Toolkit for HIV Situation and Needs Assessment in Prisons (pdf)