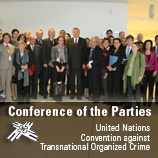 20 October 2010 - During a meeting with non-governmental organizations today, Yury Fedotov, UNODC Executive Director, expressed his deep appreciation for the role that civil society organizations play on the frontlines of the fight against transnational organized crime and for the support that they extend to its victims.

Taking place on the margins of the fifth session of the Conference of the Parties to the United Nations Convention against Transnational Organized Crime, this informal encounter was Mr. Fedotov's first with the NGO community since he took office earlier this year. The meeting was convened by the NGO Alliance on Crime Prevention and Criminal Justice, an umbrella organization representing hundreds of organizations working on preventing crime, reforming criminal justice and protecting victims of trafficking, as well as on other forms of organized crime.

Michael Platzer, Chair of the Vienna NGO Alliance, highlighted the ways in which NGOs bolster the work of UNODC. He called for further cooperation and stressed the importance of enlisting NGO support. He also stressed that UNODC could make more effective use of the global base commanded by civil society networks: "The people who care about the issues that your intergovernmental bodies deal with are very knowledgeable and are expert resources UNODC could take greater advantage of".

Mr. Fedotov praised the contribution of NGOs, saying: "Your testimony is crucial in the international debate on the prevention of organized crime and the protection of its victims". He went on to highlight the transnational, borderless nature of organized crime, a characteristic that needed civil society groups to bring their knowledge to bear and to assist Member States in their efforts.

Mr. Fedotov expressed his satisfaction with the high number of NGOs represented at the fifth session of the Conference, specifying that  he was "personally committed to giving NGOs a platform to support each other, cry out against injustice and  act on behalf of the victims we all aim to serve". He added that without close mutual cooperation, he and his staff would not be able to fulfil the Office's mandate.

Regarding the steps to be taken on the part of civil society groups to build upon the outcomes of the current session of the Conference, the Executive Director advised NGOs to intensify their advocacy role and ensure that their voice was heeded by Member States, adding that he looked forward to continued dialogue with NGOs in the future.