Taking exploitation out of tourism in India 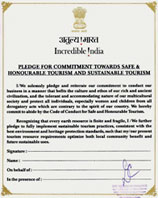 8 October 2010 - Every year, millions of tourists visit India, and the Commonwealth Games currently taking place in New Delhi have added thousands more to that number. While tourism can be a boon, a darker picture of the industry emerges as the sexual exploitation of women and children, and trafficking in persons, increasingly come to the fore.

Indian hoteliers and tour operators are therefore joining forces to enforce zero tolerance of such practices.The Ministry of Tourism, UNODC, the Pacific Asia Travel Association and Save the Children have jointly developed and adopted a Code of Conduct "to protect the dignity, safety and right to freedom from exploitation of all tourists and local residents involved in or impacted by tourism".

Studies have shown an increase in sex tourism in countries hosting major sporting events and there have been reports that hundreds of children have been kidnapped from all around India for the purpose of serving as sex workers during the Games.

On 27 September, World Tourism Day, nearly 250 tourism professionals in India pledged to abide by the Code of Conduct for Safe and Honourable Tourism. On that occasion, India's Minister of Tourism Kumari Selja declared: "Through signing this pledge we are conveying a strong message to the world that neither we nor our organizations will be party to activities that exploit women and children."

The Code aims to make sure that no one involved in the hospitality industry is forced to use drugs or is sexually exploited, crimes that UNODC is mandated to fight against, especially in so far as they touch on trafficking in persons.

Those who accept the principles of the Code are expected to rethink the way they do business and adopt measures that will protect tourists and locals.

For example, tour operators should inform themselves and others of legal provisions that promote safety; make sure that tourists know about hotlines for women and children; liaise with the local police, immigration authorities and committees that work on women's and children's welfare; help people who have been exploited to file reports with the authorities; raise awareness of the Code among taxi drivers, tour guides and event organizers; and report employees who are found to be involved in exploiting others.

The Code also warns against treating the victims of exploitation as criminals by making sure that they are offered care, protection and legal and medical attention.

Rajeev Kohli, Vice President of the India Convention Promotion Bureau says the Code can provide a good global business model. "The Code gives us a set of goals and values that we should all aim to achieve. These are basic principles that every country should follow. Achieving these goals will also make us look very good compared to our competitors and are good business practice."

But merely pledging adherence to the Code is not enough: awareness-raising and training of staff must now begin. UNODC is helping the Ministry and other partners develop training and communications campaigns. Also, all signatories must report every year on their efforts to implement the Code's provisions to a designated authority.

Code of Conduct on Safe and Honourable Tourism (PDF)

Pledge for commitment towards Safe and Honorable Tourism (JPEG)