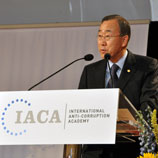 Addressing the inaugural conference, Mr. Ban said: "The launch of the International Anti-Corruption Academy is a milestone in the efforts of the international community to fight corruption.  It has great potential to advance the goals of the landmark United Nations Convention against Corruption."

Mr. Ban added that while too often in the past corruption was perceived as a fact of life, today attitudes are changing. "Across the world, intolerance of corruption is growing. The establishment of this Academy responds not only to this increasing sense of outrage and injustice, but also to an urgent need to train the experts we need to conquer this global menace."

Noting that traditional methods are proving no match for new types of corruption, especially financial crimes, Mr. Ban said that the Academy will nurture a new generation of leaders in the public and private sectors - a global network of talented, like-minded professionals; while its curriculum and activities will complement the technical assistance provided in those areas by the UNODC, guardian of the Convention.

"Although we have come to understand more about the causes and effects of corruption, combating it has proved difficult. One major handicap is that we don't know how to measure it - a crucial need in our fight against an unseen foe. The best we can do right now is to gauge public perception of corruption. But gauging perception is like measuring smoke rather than seeing the fire," added Mr. Ban

"The creation of a precise body of knowledge about a poorly researched and little-understood subject will shed more light on murky deals. If we can calculate inflation and GDP, it should not be beyond our abilities to develop an effective and scientific measure for corruption," he said.

"As knowledge deepens and spreads, it will create the conditions for change, enabling Governments and other stakeholders to make evidence-based policies. Knowledge will also empower communities to become part of the solution rather than mere victims of corruption. Armed with know-how, citizens can claim their rights and shape their own destinies," said Mr. Ban.

The Academy will offer tailor-made programmes, including courses for practitioners from developing countries. Students will be able to pursue academic degrees while exchanging ideas and networking on campus.

The Academy is the product of collaboration between Austria, UNODC and the European Anti-Fraud Office. The Austrian Government has provided state-of-the-art premises in Laxenburg, near Vienna, to house the Academy, which will become an international organization in 2011. It is the world's first educational institution dedicated to fighting corruption. It will train policymakers in Governments, the private sector and civil society, as well as professionals such as judges, investigators, prosecutors, police officers, regulators and academics from all over the world.

After his address in Vienna's historic Hofburg Palace, which was attended by some 1,000 participants from 90 countries, Mr. Ban visited the campus, where the first courses were already taking place.

Your No Counts (UNODC anti-corruption campaign)