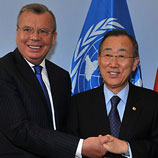 3 September 2010 - At a media encounter at the Austrian Federal Ministry for European and International Affairs yesterday, Secretary-General Ban Ki-moon introduced Yury Fedotov, the new Director-General of the United Nations Office at Vienna and Executive Director of UNODC.

"I have chosen him because of his strong commitment to the United Nations cause, his credentials, expertise and experience as the distinguished former Deputy Foreign Minister of Russia and also Russian Ambassador to the United Kingdom. I am sure that he will be one of the most exemplary, splendid and distinguished leaders of the United Nations here. I count on continuing cooperation with him and I am sure that he will also be very much committed to work together with you," said Mr. Ban.

Mr. Fedotov, who will take up his duties in Vienna on 13 September, is currently part of the Secretary-General's delegation during his bilateral visit to Austria.

He will lead policy on the agenda of UNODC, including rule of law; policy and trend analysis; prevention; treatment and reintegration; and alternative development. UNODC is a global leader in the fight against illicit drugs and international crime, mandated to assist Member States in their struggles against illicit drugs, crime and terrorism.

An eminent diplomat, Mr. Fedotov has represented his country at the United Nation's most important deliberative organs, including the Security Council and the General Assembly. He has also been posted to Algeria and India and served as a member of the College of Commissioners of the former United Nations Monitoring, Verification and Inspection Commission in Iraq (UNMOVIC). Mr. Fedotov has been awarded the Order of Friendship, several medals and received the Certificate of Appreciation from the President of the Russian Federation.