Blue for good: fashion with a conscience for victims of human trafficking 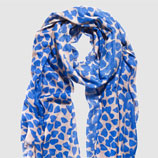 28 December 2011 - As part of its efforts to forge partnerships with the private sector, the UNODC Blue Heart Campaign against Human Trafficking has entered into a joint venture with luxury fashion label Beulah London, a socially conscious brand which, through the manufacture of its fashion items, works with women who have escaped the sex trade in India.

In October, Beulah London showcased three exclusive items in its autumn/winter show featuring the Blue Heart, an international symbol against human trafficking: a silk georgette Sabtiri Dress, a silk Shibani Scarf and a cotton Beulah bag. The items were made by women from two Beulah-supported projects in India - Freeset and Openhand.

Freeset, based in Kolkata, provides more than 150 women who have escaped the sex trade and who have been rescued from being trafficked with the opportunity to make canvas bags, which are given to Beulah customers with each purchase. In Delhi, Openhand employs 100 women who have escaped trafficking and the sex trade, including some who are HIV-positive. The women print silks and make pieces such as scarves and kaftans. For their work, the women receive a salary, health insurance, childcare and textile training to develop their skills.

"Ethical clothing is becoming increasingly popular, and people are a lot more aware of how their clothes have been made," said Natasha Rufus Isaacs of Beulah. "As Beulah grows, we want to support more projects to benefit women who have survived trafficking and eventually set up our own project and training schemes in the UK," she added.

For every dress, scarf or bag sold, a proportion of the profits goes to the Blue Heart Campaign, which also supports the United Nations Voluntary Trust Fund for Victims of Human Trafficking.

The UNODC Blue Heart Campaign calls on all sectors of society to join the fight against what is a violation of human rights. The campaign aims to raise awareness of human trafficking as a modern form of slavery that exploits millions of people around the world and to prevent more people from becoming victims.

The United Nations Voluntary Trust Fund, managed by UNODC, was officially launched in 2010 by Secretary-General Ban Ki-moon, and through its Small Grants Facility supports the provision of on-the-ground humanitarian, legal and financial aid to victims of trafficking. In October 2011, the Small Grants Facility awarded funding to 12 front-line organizations working with survivors of human trafficking around the world.

The Beulah items are available online and can be purchased here.