Shimo La Tewa: the centre of Kenya's fight against piracy 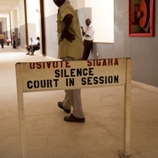 31 March 2011 - Until relatively recently, the concept of pirates and piracy resided in history books and Hollywood studios - romanticized figures removed from today's world. However, the resurgence of piracy, which has an estimated global value of between $7 and $12 billion, is a very real and dangerous threat. The waters off the coast of Somalia have now become the most dangerous in the world, commercial ships, food aid vessels and private boats all being targeted for their contents and potential ransom money.

As the lead United Nations agency assisting countries in combating crime, UNODC has been working with the Kenyan authorities since May 2009 in their efforts to combat piracy. As a neighbour to Somalia, Kenya has played a vital role in piracy prosecutions and convictions.

One of the focal areas of these actions to suppress piracy activities is Shimo La Tewa, near the Kenyan coastal city of Mombasa. The Shimo La Tewa courthouse and prison both deal with piracy cases, the latter currently holding 69 piracy suspects awaiting trial. As a key drop-off point for piracy suspects captured by patrolling navies, the area has become of key importance in global efforts to fight that crime.

During a visit to Eastern Africa, UNODC Executive Director Yury Fedotov met with the Provincial Commissioner of Prisons, Mr. James K'Odieny, and the Chief Magistrate for Mombasa, Ms. Rosemelle Mutoka, and spoke of the importance of Kenya's counter-piracy efforts: "Piracy is considered a global problem and one which has hit the region and the world in many ways. Kenya's response to tackling this is commendable and we look forward to expanding the UNODC Counter-Piracy Programme even further."

In June 2010, a new high-security courtroom was opened in Shimo La Tewa to meet increased judicial needs relating to piracy. Constructed through funding from the UNODC Counter-Piracy Programme, the court has increased trial capacity and now provides a secure, modern environment suitable for trying piracy cases.

UNODC has also been working with authorities to facilitate a review of the country's legal frameworks, supporting and training prosecutors and police and improving prison facilities. The refurbished Shimo La Tewa prison ensures sufficient security while maintaining a humane approach to imprisonment. One example of the ways in which that approach is implemented is an HIV awareness programme managed by and for prisoners at Shimo Le Tewa prison.

While visiting the prison, the Executive Director expressed his appreciation for the introduction of the many rehabilitation schemes which are now in place for convicted and remanded pirates and other prisoners: "Rehabilitation is an integral part of the justice process - if prisoners do not understand that what they have done is wrong, and if they are not equipped with alternate tools for when they are released, we cannot counter recidivism."