Illicit money: how much is out there? 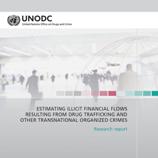 25 October 2011 - Criminals, especially drug traffickers, may have laundered around $1.6 trillion, or 2.7 per cent of global GDP, in 2009, according to a new report by UNODC. This figure is consistent with the 2 to 5 per cent range previously established by the International Monetary Fund to estimate the scale of money-laundering.

Less than 1 per cent of global illicit financial flows is currently being seized and frozen, according to the report Estimating illicit financial flows resulting from drug trafficking and other transnational organized crime. "Tracking the flows of illicit funds generated by drug trafficking and organized crime and analysing how they are laundered through the world's financial systems remain daunting tasks," acknowledged Yury Fedotov, Executive Director of UNODC.

Launching the report in Marrakech, Morocco, during the fourth session of the Conference of the States Parties to the United Nations Convention on Corruption, Mr. Fedotov said that the Conference served as an apt reminder that corruption could play a major role in facilitating the entry of illicit funds into legitimate global financial flows, adding that investments of "dirty money" could distort the economy and hamper investment and economic growth. The aim of the study is to shed light on the total amounts probably laundered across the globe and to advance research on the topic. "But as with all such reports, we will continue to refine the figures to provide the truest possible estimates," said Mr. Fedotov.

The UNODC report estimates that the total amount of criminal proceeds generated in 2009, excluding those derived from tax evasion, may have been approximately $2.1 trillion, or 3.6 per cent of GDP in that year (2.3 to 5.5 per cent). Of that total, the proceeds of transnational organized crime - such as drug trafficking, counterfeiting, human trafficking and small arms smuggling - may have amounted to 1.5 per cent of global GDP, and 70 per cent of those proceeds are likely to have been laundered through the financial system.

The illicit drug trade - accounting for half of all proceeds of transnational organized crime and a fifth of all crime proceeds - is the most profitable sector. The study paid particular attention to the market for cocaine, probably the most lucrative illicit drug trafficked across borders. Traffickers' gross profits from the cocaine trade stood at around $84 billion in 2009. While Andean coca bush farmers earned about $1 billion, the bulk of the income generated from cocaine was concentrated in North America ($35 billion), followed by West and Central Europe ($26 billion). Approximately two-thirds of that total may have been laundered in 2009. The findings suggest that most profits from the cocaine trade are laundered in North America and in Europe, whereas illicit income from other subregions is probably laundered in the Caribbean.

Once illegal money has entered the global and financial markets, it becomes much harder to trace its origins, and the laundering of ill-gotten gains may perpetuate a cycle of crime and drug trafficking. "UNODC's challenge is to work within the United Nations system and with Member States to help to build the capacity to track and prevent money-laundering, strengthen the rule of law and prevent these funds from creating further suffering," said Mr. Fedotov.