Not playing around: using games to fight corruption 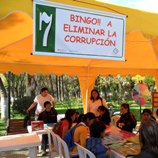 5 September 2011 - Affecting countries and societies across the globe, corruption is a crime that slows economic growth and sustainable development, undermines democracy and legal structures and violates human rights. It weakens countries' efforts to reduce poverty while at the same time allowing organized crime, terrorism and other threats to human security to flourish. Corruption is a crime that often affects the poorest.

Weak internal control mechanisms, poor access to public information, inadequate accountability instruments and a lack of social control of public administration are some of the leading causes of corruption.

In Bolivia, the Ministry for Institutional Transparency and the Fight against Corruption and UNODC have teamed up to develop a series of anti-corruption awareness-raising games in a bid to encourage participation in the fight against corruption and to promote the right to access to information. The series of seven games, designed to be interactive and educational, aims to create new preventive public policies for tackling corruption through social participation.

Part one - " Transparency against corruption" - is designed to teach people about the basic concepts relating to the topic, while part two, entitled "Discovering crimes", is used to raise awareness of the various kinds of corruption-related crime and the penalty for each corruption-related offence. The third game, "The anti-corruption mouse", focuses on teaching participants about the main State institutions responsible for fighting corruption.

On the basis of that introduction, games four to seven aim to strengthen social participation in anti-corruption efforts. Part four - "Fighting corruption - a right and an obligation" - helps to identify the responsibilities and duties of civil society in combating corruption, while part five - " Against corruption … our participation" - highlights how and why members of the public can and should participate in the fight against corruption. Game number six - "The wheel of access to information" - promotes the right to information as a fundamental tool in tackling corruption, while the seventh and final game, "BINGO! Let's eliminate corruption" allows players to review what they have learned and to find out how they can put that knowledge into practice.

The games are designed to allow participants to absorb gradually the information being taught. At the end of the seven games, the participants are equipped with key information on the standards, concepts and tools available to them in the fight against corruption.

UNODC Representative in Bolivia César Guedes noted the unique approach taken in the games: "This is a very innovative way to raise awareness in civil society of the issues surrounding corruption. Through these games, citizens will become key advocates and whistle-blowers in identifying unlawful practices in their own communities."

Since its launch, the series has been used in exhibitions in public places such as parks, squares, fairs and schools in major cities throughout Bolivia. Positively received by children, youth and adults, the games are part of the process of tackling corruption through innovative methods in a bid to promote transparency and end corruption.