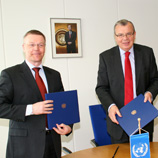 17 April 2012 - UNODC and Frontex, the European Union agency for cooperation on border management, today signed a working arrangement aimed at strengthening cooperation between the two agencies in the field of crime prevention and human security.

The working arrangement was signed by UNODC Executive Director Yury Fedotov and Frontex Executive Director Ilkka Laitinen. Speaking at the event, Mr. Fedotov said: "UNODC's mandate complements Frontex's own work. Our two organizations have much to offer each other in terms of combating transnational organized crime, especially the smuggling of migrants and trafficking in persons."

Cooperation between Frontex and UNODC will focus on activities such as risk and threat analysis, capacity-building, training and information exchange and mutual consultation. Mr. Fedotov also encouraged joint efforts to build the capacity of border control personnel to prevent and combat transnational organized crime, especially the smuggling of migrants and trafficking in persons, including through forensic document examination.

Frontex, also known as the European Agency for the Management of Operational Cooperation at the External Borders of the Member States of the European Union, was established in 2004 to reinforce cooperation between national border authorities. Frontex has provided tailored risk analyses and assessment of migration flows, including human trafficking, from Africa to Europe. An intelligence-driven agency, Frontex aims to contribute to the efficient control of movement of persons and surveillance of the external borders of European Union member States.

UNODC is a global leader in the struggle against illicit drugs and transnational organized crime. It is committed to achieving health, security and justice for all by tackling such global threats, and by delivering legal and technical assistance to prevent terrorism.