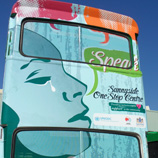 30 August 2012 - A centre supported by UNODC to assist victims of domestic violence in South Africa's capital, Pretoria, has come up with an innovative idea to reach the community: by turning one of the regular municipal public buses into a colourful and bright mobile advertisement which urges victims of domestic violence to "Speak" and reach out to the centre for help. For the next eight months, passengers, pedestrians and drivers will be seeing this advertisement daily.

"We know that many victims of domestic violence are afraid to seek help, because of shame, fear of discovery or fear of retaliation from the perpetrators of violence. We therefore came up with the idea to go to them, give them the option to seek help without undue pressure," says Ursula Jeptha, a director at Sunnyside One-Stop Centre in the Sunnyside community in Pretoria.

The idea has worked. Since the bus started making the daily rounds last month, the centre has seen an increase in the number of people calling in, seeking help and asking for promotional material and ways in which they can partner with the centre to help spread the word.

Thandeka (not her real name), a 45-year-old woman and domestic violence survivor, says: "The Centre has changed my life. If it was not for the advertisement on the bus, I would still be going through abuse. I saw the bus and knew I needed to get the number. I waited for two days before I saw the bus for the second time, and this time I made sure I got the number. I am not sorry I came to the centre; I only wish I had done so sooner."

The Sunnyside One-Stop Centre was set up in May 2011 as a joint initiative between UNODC and the Gauteng Department of Social Development, funded by official development assistance provided by Japan through the United Nations Trust Fund for Human Security. The goal of the centre is to provide support services for victims of gender-based violence in the greater Sunnyside community.

Registered social workers at the Centre provide counselling to victims and organize support groups in order to raise awareness on gender-based violence. This is done through workshops, educational programmes and sensitivity training for service providers, such as health workers, the South African Police Service and the community. The Centre further plans to provide crisis accommodation for a limited amount of time.

The Sunnyside One-Stop Centre has achieved notable success since it began operations. To date, over 120 victims of domestic violence and abuse have been assisted, and nearly 1,000 young people have been trained on gender-based violence.  Mentoring groups will be launched in December 2012. Thirty female students from schools in the greater Pretoria area will receive a second advanced training session on domestic violence.

In addition, since domestic violence cannot be fought without the involvement of men, the centre trains at least 15 men every month from Gauteng province on topics such as men's roles as husbands and fathers, links between self esteem and anger, and substance abuse. Several of the trained men have established support groups back in their communities to raise awareness and help break the cycle of violence.

Since 1999, UNODC has supported South Africa's efforts to fight violence against women, a practice which is widespread. UNODC works to promote the protection of survivors and to empower them through offering sustained support and training them on personal safety measures. UNODC has assisted the Government in awareness-raising efforts, training social workers on how to deal with domestic violence cases and setting up two other one-stop centres -- in Mitchell's Plain and Vryburg.

The one-stop centre model, designed jointly with relevant Government departments, is aimed at providing all services for victims at one location, rather than sending traumatized victims from one department or service provider to another, which often discourages victims from following up on charges against perpetrators. 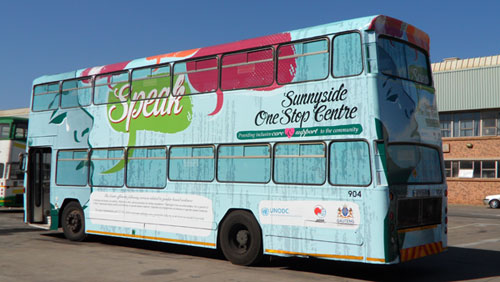