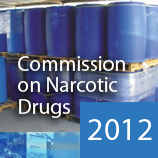 Amphetamine-type stimulants (ATS), a group that includes ecstasy and methamphetamine, can only be made with chemicals known as precursors. Due to more stringent controls on the trafficking of the most commonly used precursors, clandestine operators have quickly adapted their methods to invent viable substitutes. This can be done with only minute changes to the molecules. A worrying new trend is emerging - traditional precursors are being replaced by variants that are outside international control.

"The process is called masking and the increasing use of masked precursors presents myriad challenges to drug control authorities", said Justice Tettey, Chief of the Laboratory and Scientific Section of UNODC. "Traffickers can change the appearance of a chemical by ' tweaking'  the chemistry to circumvent controls, and easily recover the parent compound prior to use in illicit manufacture. The possibilities are almost limitless."

This is particularly apparent in the ecstasy market. In 2005, global seizures of the main chemical used in the illicit manufacture of ecstasy (PMK) declined significantly. As a result, the ecstasy market went into decline. Traffickers were selling 'ecstasy' pills which contained little or no MDMA, the active ingredient of ecstasy pills. However, starting 2010, the MDMA content in ecstasy pills increased again.

This was possible because traffickers substituted the less widely available PMK with PMK-glycidate, a derivative of PMK which is easily converted into the "parent" form.  PMK-glycidate was first seized in an ecstasy and methamphetamine laboratory in the Netherlands along with instructions for its conversion into PMK and the substance has since appeared in other countries.

Laboratory operators conceal the recognizable form of ATS precursors by packaging and smuggling these substances in such a way that law enforcement authorities would fail to detect them. Laws vary across the world for regulating such substances and dealing with offenders. Even before a substance is put under control through legislation, another appears with similar effects but different properties.

UNODC operates the Global Synthetics Monitoring: Analysis, Reporting and Trends (SMART) programme to shed more light on the emerging trends and developments in the fast-changing world of synthetic drugs.